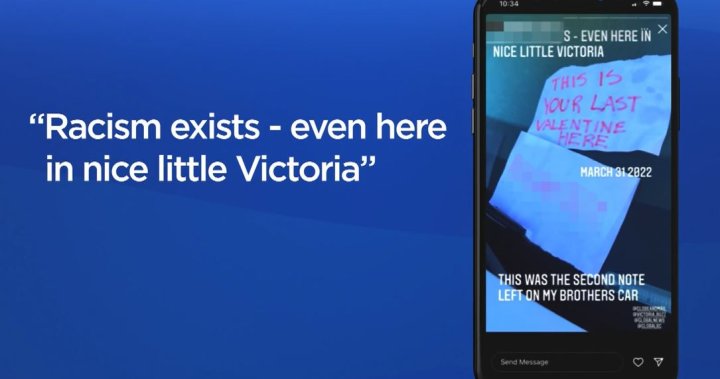 Police on Vancouver Island are investigating a series of suspected hate crimes that has left one family terrified.

Back in January, a South Asian man noticed a note on his windshield when he was visiting his white girlfriend near Victoria, BC

His sister, who we are not identifying due to safety concerns, said her brother “was starting up his vehicle and he noticed handprints starting to appear on the front window. And then a note.”

Her brother grabbed it. “He saw that it read ‘your kind isn’t welcome here’ with the Ku Klux Klan symbol.”

She said her brother was terrified.

The family notified the police of what had happened.

“I think it’s important to know what’s happening in your town so the police did get involved,” the sister said. “They went neighbor to neighbor, asked questions. Nothing came of it, of course.”

2:30
Nanaimo RCMP arrest one person after alleged assault on student

Nanaimo RCMP arrest one person after alleged assault on student

She was making coffee Thursday morning when she looked out the window and saw another note on her brother’s vehicle.

“When I pulled the note it said ‘This is your last Valentine, N-word, boy,’” she said.

She went inside, woke up her brother, and told him they had received another message.

“In that instance, I thought ‘OK, someone followed him home to see where we live to leave these notes for him to see.

She said the family is extremely concerned and they notified the police again.

They were told they need to have a security plan in place, which they have now done. They upgraded their security cameras, made the lights brighter outside and purchased bear spray. They have also outlined a plan so they know where everyone is and when they are coming home.

When officers were at the home, the sister said they actually found another note that stated ‘I’m watching you boy, wp’, which she assumed means ‘white power.’

‘Homophobia is a real thing’: BC student says he was attacked for being gay

const. Markus Anastasiades with the Saanich Police Department said they received a call on Thursday from the victims about the hate speech and they seized the notes to determine if there is any “evidentiary value” in processing them.

“We also went over a safety plan with them so they can be safe and report any further incidents to us,” he added.

He said they cannot definitively say the notes and the occasions are connected but at an initial glance, it seems that way.

“I can tell you that there is no place for hateful messages of any kind here in Saanich,” Anastasiades said.

He added the notes that were seized do constitute a charge of willful promotion of hatred under the Criminal Code of Canada.

This Vancouver Island family is just hoping that by speaking out they will stop being harassed and will no longer be scared to be in their own community.

“Racism hasn’t gone away,” said the sister. “I think for a while, people have been a bit more quiet about it and I believe since Trump was president it’s encouraged bullying and people are not as shy for expressing their beliefs.”

She ended up posting the notes on social media and they have received community support. She hopes that whoever is doing this will see that they are being proactive about the situation and keeping themselves safe.

“I always praise growing up here. Everyone is sweet and kind so when something like this happens, it’s terrifying,” she said.