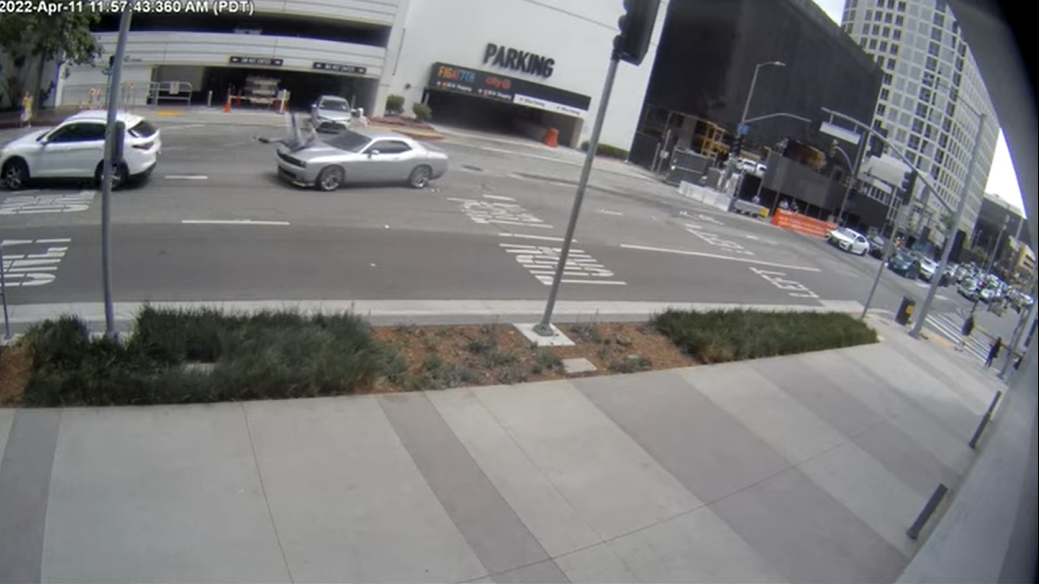 Police are searching for a pair of robbers who hit a woman with their car as she ran away from them in search of help Monday.

It happened around noon near the intersection of 8th Street and Francisco Street in downtown Los Angeles.

The woman had just left a jewelry store in the Jewelry District when her attackers began following her in a silver Dodge Challenger, police said.

As she approached the intersection in her vehicle, one of the robbers approached her vehicle and shattered her driver-side window with some sort of tool.

The woman tried to drive away from the robber, but was stopped by traffic. She left her vehicle and ran into the road while she called for help, but she was followed by the Challenger which accelerated and hit her as she ran.

After she was on the ground, two men exited the car and grabbed the woman’s watch which she had thrown away from her. One of the men was armed with a handgun, police said.

Police said one of the men is 5 feet, 11 inches and was wearing a black hooded sweatshirt, black sweatpants, white shoes and a ski mask. He is believed to have been armed with a semi-automatic handgun.

The second suspect was wearing a black sweater and light blue jeans. Police said he was also in possession of a handgun.

Video of the suspects hitting the woman and then robbing her was posted on the LAPD’s YouTube page.

Anyone with information or additional video of the robbery is urged to contact LAPD detectives Moreno and Vargas at 213-486-6840. You can also submit an anonymous tip online at lacrimestoppers.org.

Police say this robbery is part of a starting trend of robberies in which suspects follow their victims to their homes, businesses or secluded areas and then rob them.