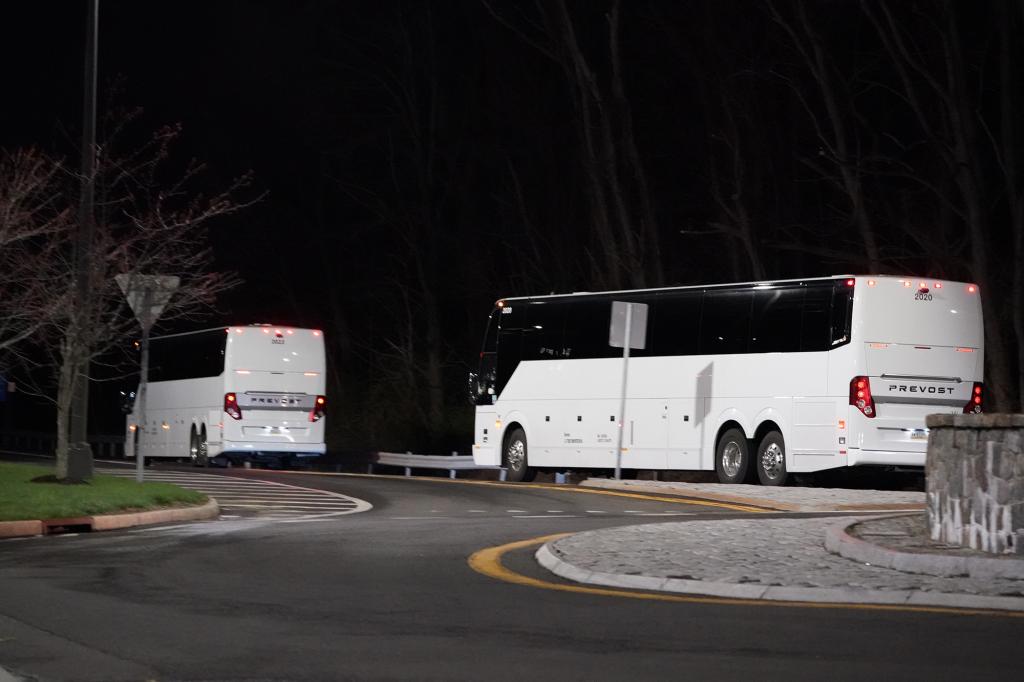 A plane full of migrants was unloaded and dispersed to various New York-area locations Friday night under cover of darkness, the latest in a series of clandestine flights authorized by the White House.

Flights resumed earlier this month after a Post expose led to their suspension last year.

On Friday, the Post saw a group of migrants disembark from an iAero Airways flight from Jacksonville, Florida, which landed at Westchester County Airport at 9:48 p.m.

The passengers were placed in two white J&F Tours charter buses. The Post tracked one of the buses as it headed for destinations in the Bronx and Yonkers.

During the first stop in Yonkers, one of the migrants walked into what looked like a sprawling dormitory complex near the grounds of Sisters of Charity, a Catholic aid center.

The bus then traveled to the Bronx, dropping off three women at a building on Kingsbridge Avenue. A group of five men, moving around a nearby street corner, gave the bus a thumbs up as it approached the building.

At each stop, three workers carrying files escorted the migrants to their new home. They returned to the bus about five minutes later.

On Crotona Avenue in the Bronx, a migrant teenager got off the bus with luggage.

“I really have to go,” said one of the managers when approached by a Post reporter. ” We’re late. We are behind schedule.

The man, who declined to be named, said he worked for MVM Inc., a controversial Virginia-based private security contractor that works for the US government. The company has worked for the CIA and NSA in Iraq and last year signed a $136 million contract with the federal government to transport illegal migrants and unaccompanied children across the country. The contractor sends “chaperones” to escort the migrants once they get off the flights.

The final stop was just before 2 a.m. Saturday, with a teenager being dropped off at the Catholic Guardian Service, an aid group, on Taylor Avenue in Soundview. He dragged his luggage into the building.