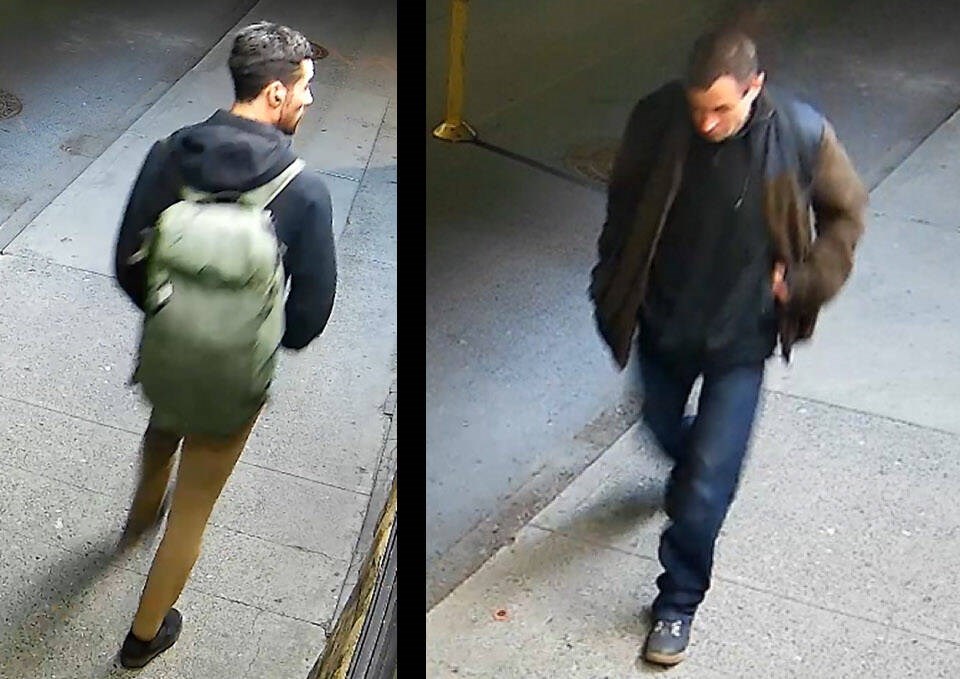 Neither man is considered a suspect in the arson, but police believe they may have information relevant to the ongoing investigation.

Detectives from Victoria’s Major Crimes Unit are hoping to identify and locate two men who are potential witnesses to an arson attack at the home of a Ukrainian priest and his family on April 20.

Neither man is considered a suspect in the arson, but police believe they may have information relevant to the ongoing investigation.

The blaze sent a young girl to hospital after suffering severe cuts as she escaped the blaze through a second-story window of the Caledonia Avenue home.

The first man is described as around 50 years old and white. He is about six feet tall with an average build, short dark brown hair, and a clean-shaven face. He wore a brown jacket with black patches near the shoulders, over a black sweater, with dark blue jeans and dark-colored lace-up shoes. The man was in the Cook Street and Caledonia area just after 1 a.m. on April 20.

The second man is described as around 25 years old and either white or Middle Eastern. He is six-foot-two with shoulder-length dark brown hair that is shorter on the sides and back and longer on top and a short beard. He wore a dark blue hooded coat, olive brown pants, dark shoes, and an army green backpack. He was also in the Cook and Caledonia area just after 1 a.m. on April 20.

Investigators say they received several tips after releasing a video of a vehicle driven by a potential witness.

Yuriy Vyshnevskyy, with the help of a neighbour, grabbed his three daughters as they jumped from the second story of their house to escape the early morning fire. He woke up to check a noise and discovered flames after someone apparently poured flammable liquid into the letter slot.

During their escape, her 11-year-old daughter landed on a shattered window, resulting in a deep cut that severed a nerve in her arm. First responders were initially concerned that she was losing a large amount of blood from her injury. She has since had two surgeries to repair the damage and doctors say it could take up to a year before she can regain full use of her arm. His stitches will be removed in the coming week, but his arm will be in a splint.

While the rest of the family escaped relatively unscathed, mental wounds may take longer to heal.

“We received counseling services,” Vyshnevskyy said last week. “There is so much information to process at the same time. It takes time to prioritize information and determine what needs immediate action.

The heritage house, next to the church, suffered heavy damage, particularly to the front entrance and the stairs to the upper floor.

Police are asking anyone who recognizes any of the potential witnesses or has information about the fire to call the VicPD reporting office at 250-995-7654 ext 1.

— With files by Pedro Arrais