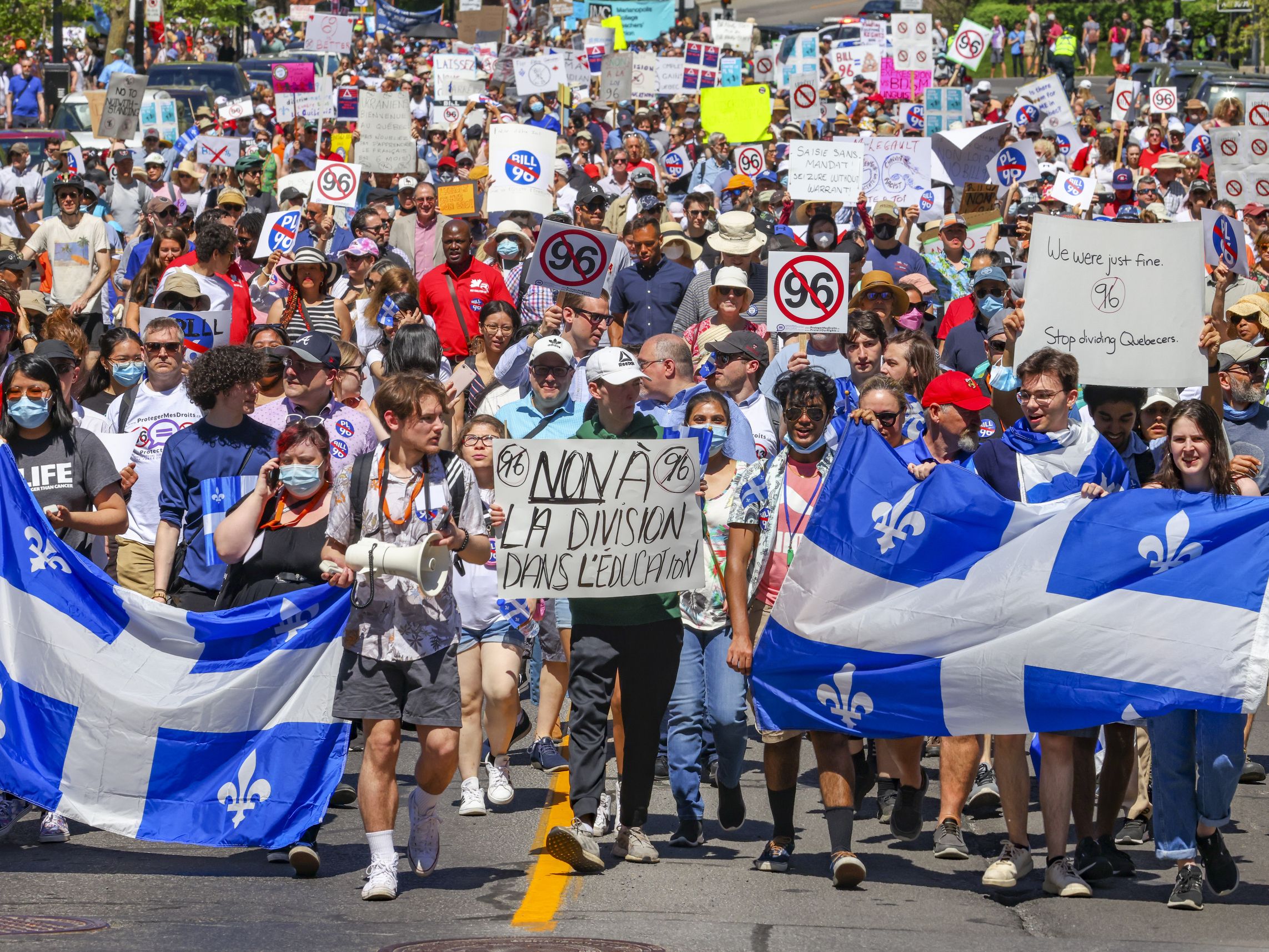 It was an unusual scene on a bizarrely hot day in May.

Led by the political satirical singing group Bowser and Blue, several thousand people took to the streets to demonstrate against a bill aimed at strengthening the status of the French language in the province.

Many protesters said that while they support protecting French language and culture in Quebec, Bill 96 – which is expected to be voted on in the National Assembly at the end of the month – would have disastrous consequences on education, language and health care. sectors.

The law would give increased powers to the Office québécois de la langue française, the province’s language watchdog, such as the power to search and seize without a warrant. It would also restrict service in English in health facilities and courts.

“Francois Legault’s politics are dividing Quebecers in all sorts of ways, and we have to stand up for what’s wrong,” said Quebec Liberal Party leader Dominique Anglade. “We are all in favor of supporting and promoting the French language; the problem here is that it has an impact on access to justice and health care. There are many people protesting today because they realize it will impact our future.

When introduced before the march began, Anglade was met with cheers as well as a few boos from the crowd, possibly due to anger over an amendment introduced by the Liberal Party to force students Anglophones to take more courses in French.

Although this amendment was softened during last month’s hearings, it remains a sore point among English-speaking CEGEPs. Students say that being required by law to take either three core courses or three additional French courses would affect their future, and the law will create two tiers of students, as allophones and francophones in English-language CEGEPs will have to take proficiency exams in French to graduate, while English speakers will take a school leaving exam in English. The law also limits the registration of Francophones in Anglophone CEGEPs.

The protest started at Dawson College at 10:00 a.m. and took place on Atwater Avenue, along Sainte-Catherine Street West, and ended in front of Montreal office of Prime Minister François Legault in Sherbrooke and av. McGill College.

Legault defended Law 96 as being realistic, balanced and necessary to protect French. He said the rights of the English community would be respected if it became law.

“My son will be going to CEGEP in a few years; he has learning difficulties and has been in French immersion since he was a child, but taking more French lessons is going to be an extreme problem for him,” said Notre-dame-de-Grâce resident David McLeod. Dressed in a black kilt and carrying a black parasol with a design of a sunflower inside, McLeod decried “legislative bullying,” which he said came with very little consultation. He said that while the government’s opinion on the bill appears to be taken, it is still important to voice opposition. “I think people who stand up and say their rights matter always make a difference.”

The protest was peaceful as it made its way through the city center. Police escorts were in front and behind the line of marchers.

Adam Bright said he was there hoping to publicize the bill, the intricacies of which are not well known.

“It’s kind of heartbreaking how few people actually understand what this bill is going to do for their opportunities,” said Bright, who teaches literature at Dawson College. Bright believes he will lose his job if the bill passes because there will be less need for English instruction in the CEGEP system. “So many of us invest in French in Quebec. My son goes to a French daycare and will go to a French elementary school, but the bill is based on a misconception that learning English somehow puts French at risk.

As the crowd made its way to the Roddick Gates of McGill, there was a group of about 15 Bill supporters playing music and singing in French, inviting everyone to sing along.

There were a few boos and shouts, but there was no serious confrontation between the two groups.

“The purpose of the French language is to bring people together, so we wanted to greet people and celebrate our culture with them,” said Montrealer Florence Beaudoin. “French is important, and we are in a French province, but it is difficult to be served in French in Montreal. It is not normal. I’m here to support the language.