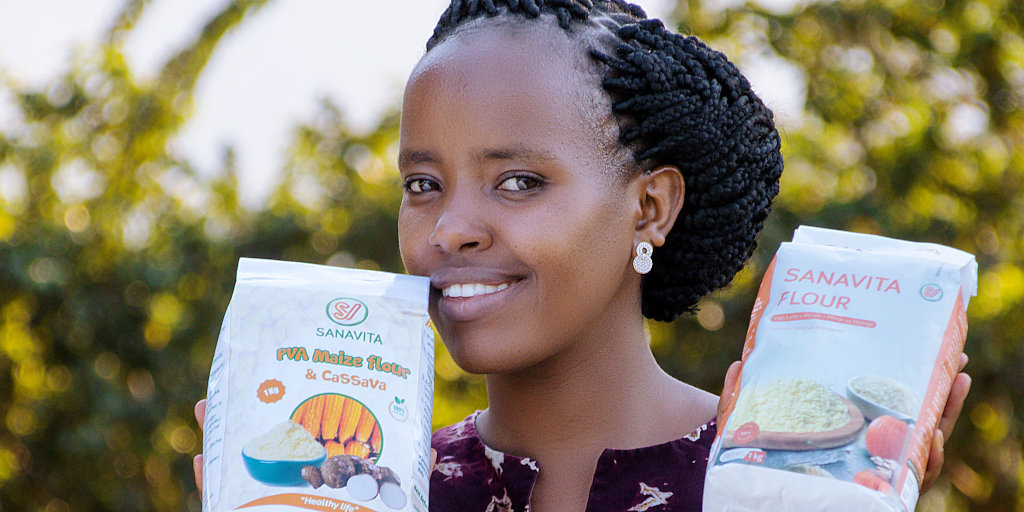 Jolenta Joseph with a selection of Sanavita products.

The founder of Sanavita explains how she spotted a gap in the nutritious food market in Tanzania.

While studying for a BSc in Human Nutrition at Sokoine University of Agriculture, Jolenta Joseph was looking for a business idea that would help reduce rampant malnutrition among vulnerable communities in Tanzania. “I really wanted to understand the exact issues that caused malnutrition, but I didn’t know where to start,” she says.

A job she landed in 2017 provided a starting point for Joseph. “The nutrition awareness program I attended helped me understand how agriculture can help people get out of malnutrition. I spoke to farmers and began to understand the challenges they faced in producing and marketing healthy crops. »

One thing became clear: farmers in rural areas needed to know exactly what to produce, while city dwellers needed nutrient-dense and tasty produce that they could not grow in the city. A company that would bridge this gap between farmers and buyers was the next logical step.

The entrepreneur established Sanavita in 2019, an agribusiness that processes biofortified crops to create various edibles. The first product sold by his company was the orange-fleshed sweet potato – a special type of biofortified sweet potato that contains high levels of beta-carotene. “I took sweet potatoes on credit from farmers in rural areas and sold them in towns,” she recalls.

As her market grew, she began to interact with different categories of consumers and saw a way to add even more value to the product. “Some consumers wanted processed products that could last a long time. So I devised a way to dry the sweet potato using solar energy while retaining their nutrients, then grind them to produce a nutritious composite flour that I sold to food processors. Joseph had no brand at the time but supplied his products wholesale to other companies.

His next step was to design other nutrient-dense products to sell alongside the sweet potato flour which had been further enhanced by adding rice and pumpkin seed powder to it.

Around the same time, the Department of Agriculture released a biofortified corn seed, and Jolenta asked the farmers she worked with to grow it. She then improved the maize powder by adding cassava to flavor it. She also designed a cookie by mixing mashed sweet potatoes with iron beans and cashews. These products would eventually become part of the Sanavita brand, and over the following years the company was able to significantly increase its production.

“When the business started, we worked with 10 small farmers who supplied us with between 200 kg and 500 kg of sweet potatoes every month. The number has since increased a hundredfold and we now receive up to four tonnes of sweet potatoes each month from 1,000 farmers,” she says.

Pregnant women, nursing mothers and children are the main target groups of Sanavita because the majority of people suffering from iron and vitamin A deficiency are women and children. According to government statistics, chronic malnutrition (stunting) affects 34% of children under five in Tanzania. “Over 60% of Tanzanians consume staple crops and our strategy is to engage rural farmers in the production of these biofortified staple crops,” says Joseph.

Sanavita’s main markets are in Morogoro, Dar es Salaam and the capital Dodoma. Products are sold through local channels such as local supermarkets, stores and markets. The company faces fierce competition from food processors who make porridge flour. But the main selling point, she says, is to focus on the quality of Sanavita’s products.

“We carefully select our ingredients to ensure nutritionally balanced products. We also produce in a certified location and scrupulously respect the food protocol, safety and hygiene,” explains Joseph. To ensure high retention of beta-carotene in the sweet potato, the company dries its raw materials in a dryer. Laboratory analyzes on all value-added products are also carried out to ensure food safety and verify optimal nutritional compositions.

The company continues to finance itself by reinvesting the profits made. It has also received support from different stakeholders and organizations such as the Global Alliance for Improved Nutrition (GAIN) and the Alliance for a Green Revolution in Africa (AGRA).

The support that Sanavita received helped her to acquire her own machines. He hopes to stop using the milling machines at Sokoine University’s Agricultural Incubation Center. Joesph’s plan is to gradually build his own certified factory and increase his production capacity. “Once we establish our site, we will strive to double our revenue and expand domestically and internationally. We are also planning to approach schools to see if we can provide them with porridge flour,” she says.

Joseph sees a bright future for Tanzania’s healthy food industry. “Nutrition awareness is widespread. More and more people are health conscious, they understand the value of nutritious products and are willing to pay more for them. Customers are also looking for well-packaged and well-prepared products.