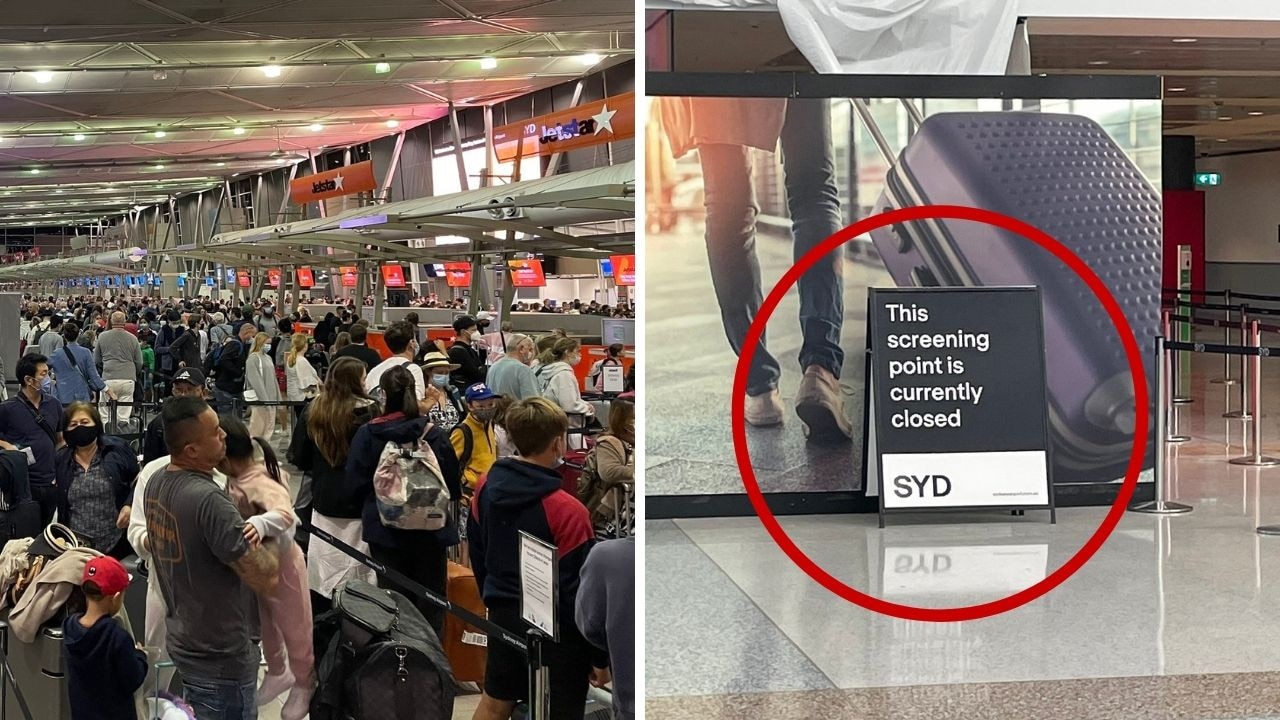 Aussies have lashed out at Qantas boss Alan Joyce for suggesting the delays at Sydney Airport are partly the blame of passengers not being “match fit” for travel.

Fed-up Aussies trapped in hours-long queues at a packed Sydney Airport have lashed out at Qantas CEO Alan Joyce for suggesting the delays are partly the blame of passengers not being “match fit” for travel.

For the third consecutive day Sydney Airport buckled under the pressure of huge crowds, with alarming photos showing huge lines stretching out of the domestic terminals onto the road from 5am.

But frustrated travelers hit back on Saturday, questioning why the airport was so poorly prepared for crowds at the start of the Easter school holidays and one day out from the Melbourne Grand Prix.

Dozens of travelers claimed as few as two of 17 security scanners in the domestic airport were operational, while others wondered why parts of the airport appeared to be undergoing upgrades after two years of low traffic during the Covid pandemic.

Another traveler caught in the mayhem on Saturday morning claimed just two airport staff were trying to direct the queues, asking: “Who at Sydney Airport woke up and said ‘we won’t need to look at surge capacity for Easter school holidays travel’ and then went back to sleep?”

In addition to the staff shortages, travelers spotted electronic check-in machines out of order.

It was bumper to bumper for people traveling overseas too, with large crowds building at the international terminal. One holidayer stuck in a queue for two hours said just three counters were open to check in passengers for three international flights.

Hotel manager John Ready claimed the situation outside the airport was just as bad, claiming dozens of people were left waiting outside Terminal 3 on Thursday night in the taxi rank due to cars not being allowed past the holding area.

“Hell is… this at 5am. It would help if the security lanes weren’t closed,” tweeted scientist Dr Darren Saunders alongside a photo showing huge crowds this morning.

Sydney Airport replied to his tweet, admitting the real reason for the delays was “close contact rules making it hard to fill shifts and staff the airport”.

By mid-morning the queues started to subsidize, with most travelers waiting less than 30 minutes.

“Things are moving much more quickly this morning with the lines cleared by 7.30am, which is good,” a Sydney Airport spokesman said.

One Sydney Airport worker weighed in on the outrage, urging travelers to be kind to employees.

On Friday, Qantas chief executive Alan Joyce watered down suggestions customers were to blame for the lengthy delays – after earlier pinning it on the “match fitness” of travellers.

He later stressed there were a number of factors at play as the industry bounced back from Covid.

“Just to be clear, I’m not ‘blaming’ passengers. Of course it’s not their fault,” Mr Joyce said on Friday.

The high-flying executive earlier said there were a number of reasons for the delays, which included passengers being unfamiliar with security protocols and newly trained staff.

“I went through airport security this morning myself. Everyone is doing their best including passengers, who are showing incredible patience in these queues,” Mr Joyce said.

He added similar pressures were being seen at airports around the world.

“It’s something we’re all working hard to get through,” Mr Joyce said.

Sydney Airport chief executive Geoff Culbert said they are “facing a perfect storm at the moment”.

“Traffic numbers are picking up, travelers are inexperienced after two years of not travelling, and the close contact rules are making it hard to fill shifts and staff the airport,” he said.

Mr Joyce also said high levels of absenteeism due to Covid-19 cases and isolation are a factor.

“In some areas, we’re seeing 18 per cent absenteeism at the moment,” Mr Joyce said.

“We do continue to apologise, because we’re hoping it won’t be too long before we get back to the norm that we have before Covid.”

And there is more grim news for people flying over the Easter holidays, with airports bracing for more delays as they prepare for the busiest travel period in two years.

Thousands of people were jammed up in long queues on Thursday night that trailed from the security line to the check-in desk and out the front door.

The chaos continued into Friday morning, with Peter Deppeler taking to Twitter to show crowds filling the airport foyer as early as 6am.

Travelers took to social media on Thursday night to share their view of queues that wrapped around the foyer and spilled out onto the roads beyond Terminals 2 and 3.

Some reported having to wait in queues for up to two hours.

Mr Joyce has advised the public to arrive at the airport “at least two hours early” so traveling is “less stressed”.

Mitch Dale was at the airport on Thursday evening and overheard an announcement being made over the PA system that it was the “busiest day Sydney airport has had this year”.

Journalism lecturer Sue Stephenson waited in line for two hours and eventually had to be escorted through the queue to get on her flight to Port Macquarie which had started boarding.

James Bing vented his frustration, saying the airport was “understaffed and undertrained”’ and could have benefited from more security lines and priority screening lines.