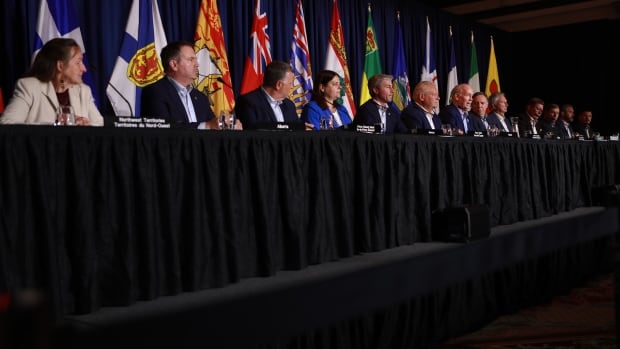 Canada’s premiers ended their two-day summit in Victoria, British Columbia, by calling on the federal government to stop negotiating through the media and sit down with them to discuss the future of funding health care.

“Twenty-four months ago we were working together in an unprecedented way,” British Columbia Premier John Horgan, chairman of the Council of the Federation this year, said Tuesday in Victoria.

“There was unprecedented collaboration and the federal government was there and we applauded that commitment…and now, eight months later, we’re exchanging notes through the media. Where did the love go? It was all so good and then it was ‘t.”

Horgan said Prime Minister Justin Trudeau promised premiers that once the pandemic public health emergency is over, the two sides would meet to determine the future of health care funding in Canada. No such meeting was scheduled and his calls for a sit-down meeting went unanswered.

“I wrote to the prime minister in December, no response,” Horgan said. “We sent out a set of principles that we thought would guide a discussion. No response. And now it’s, ‘We want you to spend it on specific things.’

“We agree with that…but there are differences and nuances depending on where you live.”

Horgan said that because each province’s health system has different needs, the federal government and the premier must engage with them individually.

Premiers say the federal government only covers 22% of health care costs in Canada. They say they want the federal share increased to 35%. 100 and maintained at that level over time.

The federal government, meanwhile, disagrees with the calculations the provinces use to determine who pays what.

“It’s high time the federal government stopped quibbling, stopped saying we don’t have a problem with our publicly funded national health care system and sat down at a table with the 13 premiers of the provinces and territories,” Horgan said. said.

A disagreement over basic facts

In 1977, the way the federal government funds health care was changed. Direct federal funding for hospital and physician services was reduced, and provinces were allowed to levy more income and corporate taxes to fund health services directly.

The federal government claims that the tax points granted to the provinces cover between 9 and 10% of the cost of public health services. Premiers say the Canada Health Transfer (CHT) – the largest federal transfer to provinces – covers about 22% of costs.

The federal government says that when the CHT and these tax points are combined with the money Ottawa spends on bilateral agreements for long-term care, home care, mental health and certain other services, the of healthcare expenditure covered by the federal government in 2021-2022 was close to 38.5%.

“They are using this bogus 22% figure because they deliberately refuse to acknowledge that $20 billion was generated last year by the provinces and territories in tax points that the Government of Canada took away, and that ‘they then took over immediately to generate income for themselves. “

Lee Soderstrom, a retired associate professor of economics at McGill University who has studied health care economics in Canada, said the figure cited by the federal government was about right.

“Provinces have already received about 35% of their total health care spending for a long time. Also, contrary to criticism of federal cost sharing, Ottawa has not reduced its share of provincial health care costs,” Soderstrom said. in an email to CBC News. .

Horgan said Tuesday that while the federal government can quibble over who pays for what, Canadians just want a system that works.

“Back and forth about the correct number, are tax points as relevant as they were in the 1990s today, as we look to the future, these are debates we should have together, not through the media,” Horgan said.

“That is why today we are strengthening our unanimity for the federal government to convene a meeting. We will get…we can sit down and fix these issues for Canadians.

A federal government official speaking on the background told CBC News that the premiers’ demand for a $28 billion annual increase in the CHT – with no discussion on where the money will be used – won’t fly with Ottawa.

“Of course, there will be conditions in that we are not going to increase federal spending on the provinces for health care so that they can then reduce their own spending. That would be absurd,” LeBlanc told Hunter. .

Horgan said provincial governments are held accountable for how they spend money through their respective budget processes and every dollar spent by provinces is debated in regional legislatures.

“The so-called ropes make it look like there’s some sort of bonded relationship here,” Horgan said. “We are co-governors. We are equal orders of government. There is no hierarchy here, we are the same, and we are saying that we have to sit down collectively and figure out where we go from here. “

Federal Health Minister Jean-Yves Duclos told CBC News Network power and politics On Tuesday, the details of the specific outcomes that the federal government would tie to any additional health funding can be agreed between it and provincial health ministers.

Horgan and Ontario Premier Doug Ford rejected the proposal and said it would be insulting to Prime Minister Justin Trudeau to refuse to meet with them.

“It’s quite dishonest when you bring in the minister and say, ‘Here are some ideas and, by the way, hand them over to your health ministers,'” Ford said. table… This is unacceptable. We have to sit down.”

Horgan also said he doesn’t see how provinces can continue to discuss cost-sharing for a national pharmacare or dental program until the overall funding issue is resolved.

“We shouldn’t do this until we have a solid foundation for our entire program,” Horgan said.

The premiers also released a five-page communiqué calling on the federal government to help them address the cost of living, supply chain and labor challenges facing Canadians.

Ford said Ontario faces a once-in-a-generation labor shortage. He said the federal government should help bring in economic migrants to fill hundreds of thousands of job vacancies in his province.

“As of this morning, based on the numbers I got from our team, we’re 378,000 short,” Ford said. “That’s 378,000 people who could contribute to our economy and… if we don’t fill those jobs, somebody else in the world will fill them.”

Ford said one of the biggest barriers to being nominated for these positions is a cumbersome immigration process that can take up to 26 months to bring an immigrant to Canada and declare them qualified to enter the workforce.