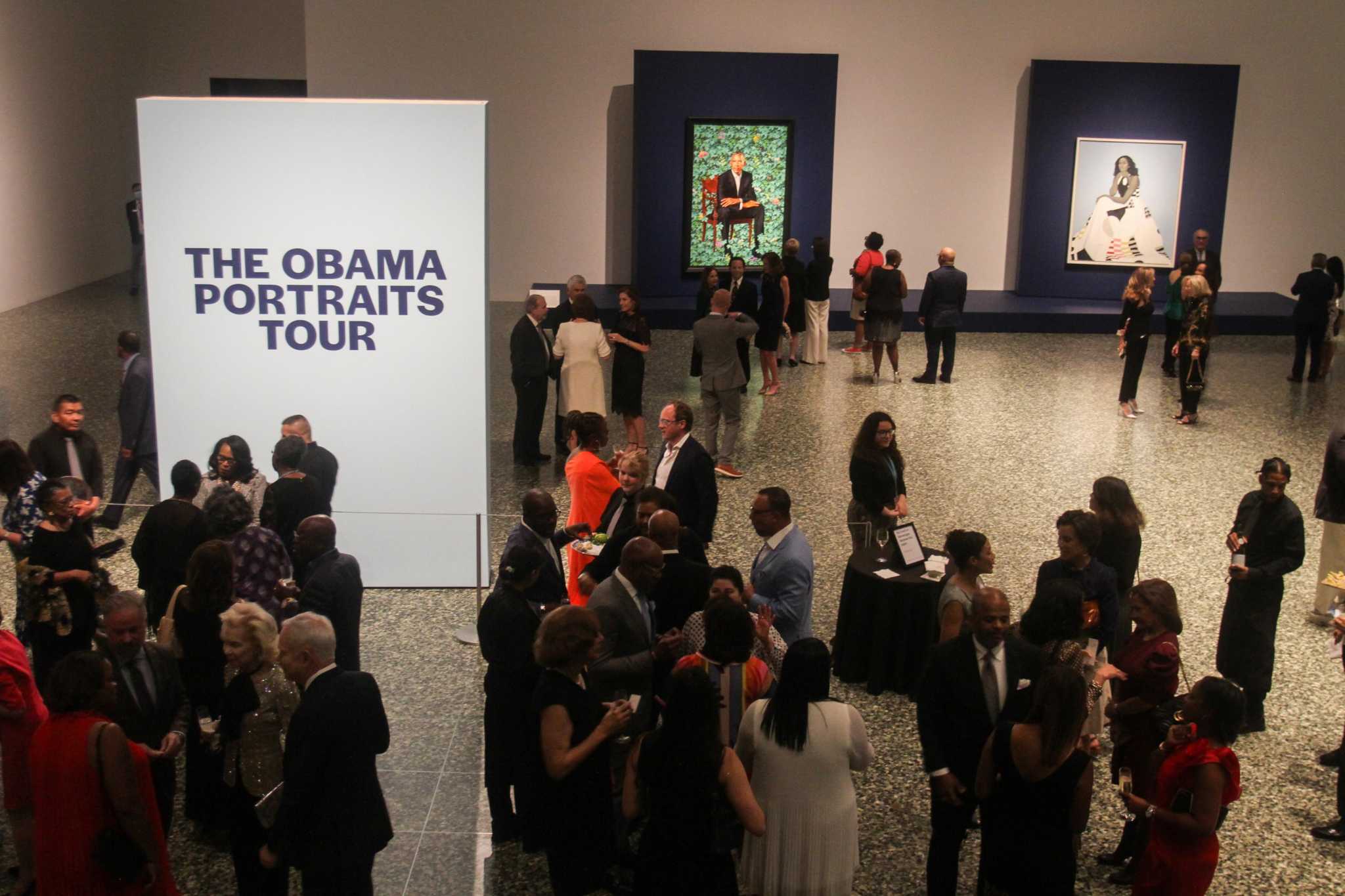 The Museum of Fine Arts, Houston will welcome a former US president and first lady this weekend.

On Sunday, “Barack Obama” the presidential portrait by Kehinde Wiley, and “Michelle LaVaughn Robinson Obama” by Amy Sherald, will be unveiled to museum visitors. Organizers expect around 4,000 people to attend on the free-admission opening day, though they admit they may be in for a surprise. A crowd of over 7,000 set an all-time record on March 17, the museum’s last free-admission day.

They will be ready. The museum is hosting a “Sunday Best” opening event for the public, with 21 micro-events across campus, including a fashion promenade and band performances.

Images of presidents have graced the walls of MFAH before, including the famous Lansdowne portrait of George Washington by Gilbert Stuart. And in 2018, a display of founding fathers coincided with local performances of the musical “Hamilton.”

The difference between those and the Obama portraits, said MFAH Director Gary Tinterow, is the artwork itself. “These are already iconic,” he says. “And we didn’t have to wait 200 years.”

“They’re even better in person,” Bobbie Nau said at the show’s preview. “’Michelle’ is stunning — though I think I prefer ‘Barack.’”

The portraits appear side-by-side, somewhere between regal and rock star. The couples’ posture and facial expressions suggest a statesman-like quality, as is tradition with official state portraits. Their presence is commanding — arresting even, yet approachable, too.

“They just took my breath away,” Roslyn Bazzelle Mitchell said after the preview. “In that moment, I experienced a joy like none other.”

It’s rare for an exhibition to contain only two works of art, Tinterow noted. And rarer still for both the subjects and artists to be African-American.

Wiley and Sherald have since turned their focus to other parts of their practice, declining most interviews and appearances relating to the project. Regardless, “The Obama Portraits Tour” has only gained traction. Houston was initially the last leg of the exhibition’s five-city tour; now two additional stops have recently been added. But Houston is pulling out all the stops, Bateman said.

“Sunday Best touches on what this exhibit means for the Black community… dressing up and, after church, being in fellowship with each other,” Bateman said. “People want to feel like the museum is a welcoming place. They want to see themselves represented within the galleries.”

“Barack Obama” and “Michelle LaVaughn Robinson Obama” arrived with an instruction manual. The artists and their respective studios included specifications for each piece, Bateman said. Neither are fans of white walls. Both included height requirements.

“Sherald prefers ‘Michelle’ to be 15 inches from the ground because it creates a more intimate conversation,” Bateman says. She later received studio approval to display the piece a little higher at 23 inches, which better suits the space. “We’re trying to fill 6,000-square feet here.”

Wiley expressed strong feelings about colorless backdrops, so Bateman opted for navy, inspired by Air Force One, mixed with sky blue. “It gives a presidential feeling,” she says of the shade.

Wiley, a New York City native who earned a BFA from the San Francisco Art Institute and MFA from the Yale University School of Art, is known for referencing the work of Old Masters in his highly naturalistic paintings of Black subjects.

Flowers within the leafy background each carry special meaning for Barack Obama: white Jasmine for his childhood in Hawaii, African blue lilies to honor his late father who was born in Kenya, and chrysanthemums, the official flower of Chicago, where his political career first blossomed .

Sherald painted the former first lady’s skin in gray scale, a technique the artist uses as a nod to WEB Du Bois’ black and white photographs and to remind viewers of the lack of African-Americans in the history of large-scale painted portraits.

The last time MFAH hosted an event similar to “Sunday Best” was in 2012 for the “Henry Ossawa Tanner: Modern Spirit,” a retrospective celebrating the work of a former enslaved person and first African-American painter to gain international acclaim. Women who arrived at the Museum after church wearing their big hats received free admission to the exhibition.

Tinterow said visitors turned up in grand millinery for “Picasso Black and White” the following year, too. “They asked if they could get in free since they wore their hats and I said, ‘Let them through,’” he recalled.

Bateman is anticipating an impressive showing of headpieces for the 2022 revival of “Sunday Best.” A fashion parade is scheduled for 3 pm There’s “Music on the Plaza” with Houston’s Double Dutch at the Brown Foundation outside of the Glassell School of Art, Texas Southern University’s the Ocean of Soul Marching Band and readings by Writers in Schools Youth Poets, led by Houston Poet Laureate Outspoken Bean, in the Favrot Auditorium, among dozens of other program offerings.

Without question, the day’s biggest attraction will be the Obama portraits. A limited number of walk-in tickets have been allotted; remaining access will be admitted by timed-entry with advance reservations.

“People idolized the former first lady and president. They’re the last of what we knew from the pre-pandemic world,” Bateman said. “We’re already nostalgic for them.”