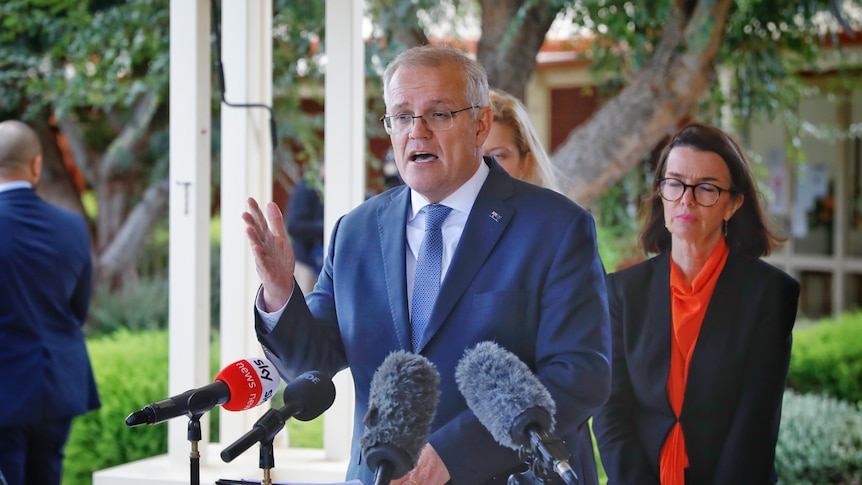 Scott Morrison ignored a candid assessment from one of the commissioners of the New South Wales anti-corruption watchdog, who called critics of his organization “buffoons”.

On Monday, the outgoing commissioner of the NSW Independent Commission Against Corruption, Stephen Rushton, took aim at people who described the agency as a “kangaroo court”.

He did not specifically mention the Prime Minister, although Mr Morrison has uttered the phrase several times to condemn NSW’s ICAC use of public hearings in its investigations.

“I stand by what I said about why I don’t think this model is a good model for federal jurisdiction,” the prime minister told reporters in Adelaide.

“He can say whatever he wants, I’m not easily offended. I think you learned that about me.

“He’s free to disagree with me if he wants to, I just don’t think their model is the right model at the federal level.”

Mr Morrison’s criticism of NSW’s ICAC focused on the treatment of former Prime Minister Gladys Berejiklian, where details of her relationship with then MP Daryl Maguire were released at public hearings.

LIVE UPDATES: Read our blog for the latest news on the 2022 Australian Federal Election

The model proposed by the Prime Minister, the Commonwealth Integrity Commission (CIC), operates behind closed doors.

It has been criticized by federal labor and integrity experts as too secretive and lacking in teeth to effectively fight corruption at the national level.

Mr Morrison refused to present the bill to parliament, arguing that the Labor Party’s refusal to back the bill was the reason for the delay.

This is despite the fact that the legislation is regularly debated without express prior bipartisan support.

Mr Frydenberg is facing a challenge from independent candidate Monique Ryan in his Melbourne constituency in Kooyong – the creation of a national integrity commission is one of the main issues on which Dr Ryan is campaigning.

“I would use different words,” Mr Frydenberg told the ABC in response to questions about the Prime Minister’s “kangaroo court” descriptor.

“We will all use our own words to explain our own positions.

“I think the ICAC (NSW) has produced results where good people have left office without convictions and huge amounts of evidence.”

In an interview with The Sydney Morning Herald and The Age newspapers, Mr Morrison warned of “the unintended consequences of a poorly thought out integrity commission” which were “very dangerous”.

Labor seized on the remarks, arguing it was proof the Prime Minister never intended to follow through on his 2019 election pledge to set up the Commonwealth Integrity Commission.

“What’s very clear is that if Australians want a national anti-corruption commission and to clean up politics, they need a Labor government to do that.”

Labor has pledged to set up a watchdog within six months of winning the government.

In a rare moment of cross-party praise, Mr Albanese noted the New South Wales Premier’s warning that the Prime Minister’s comments had gone too far and risked undermining public confidence in the integrity agencies.

“Dominic Perrottet, the Premier of New South Wales, also stood up to Scott Morrison on this issue, and I give Dominic Perrottet absolute credit for doing just that,” Mr Albanese said.

Labor has pledged to set up a watchdog within six months of winning the government.