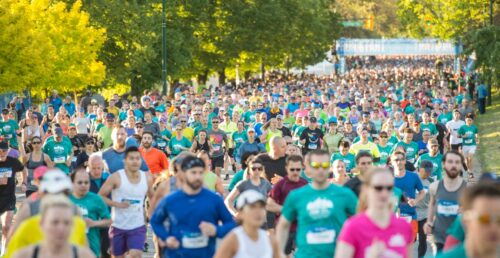 Tons of road closures are planned for the BMO Van Marathon coming to the city on April 30 and May 1. Runners take to the streets on Sunday, but virtual participation and registration also closed other areas on Saturday.

A record 18,500 registrants will race during the event, which is finally resuming in person after a two-year hiatus during the pandemic.

Vancouver police confirmed “there will be a lot of road closures due to the marathon and it may be difficult for people to get around the west side and downtown” in an email to Daily Hive April 30.

Police will post updates on social media throughout the weekend.

“This means roads will close and later reopen as runners traverse the course; NO roads are closed for the duration of the race. The half marathon has a 4 hour time limit and the marathon has a 6.5 hour event time requirement.

On April 30, traffic will be disrupted around Vancouver’s Riley Park, Coal Harbor and downtown.

Here is the general information you need to know about public access roads, organized by district of the city:

These closures are important to be aware of before you leave home this weekend.

People starting the marathon from Queen Elizabeth Park will cause closures.

Access to the Hillcrest Community Center is available to residents via Main Street and 30th Avenue.

On Sunday, roads will be closed on Midlothian Avenue and Clancy Lorange Way.

From midnight to noon on Sunday, 33rd Avenue at Main Street will be closed.

From 5 a.m. to 9 a.m., use Main Street at 33rd Avenue to access the Hillcrest Community Center.

During this time, local traffic may use Cambie Street to Main Street from King Edward Avenue to West 41st Street.

Saturday, from noon to 8 p.m., West Hastings Street west of Burrard will be closed, as will Burrard Street in Bute Street, West Pender Street from Burrard to Denman and Thurlow from Eveleigh to Cordova.

Local traffic may use West Cordova Street via Burred Street in the Coal Harbor area if faced with closures.

On Sunday, the area around the finish line on West Pender Street and Bute Street will be closed.

My husband is running the @BMOVanMarathon (half marathon) on Sunday and here I am trying to find the list of food trucks that will be at the festival. 👀 #bmovm #runvan

For the street festival from 8:30 a.m. to 3 p.m. on Sunday, West Hastings Street will be closed between Burrard and Bute Streets. 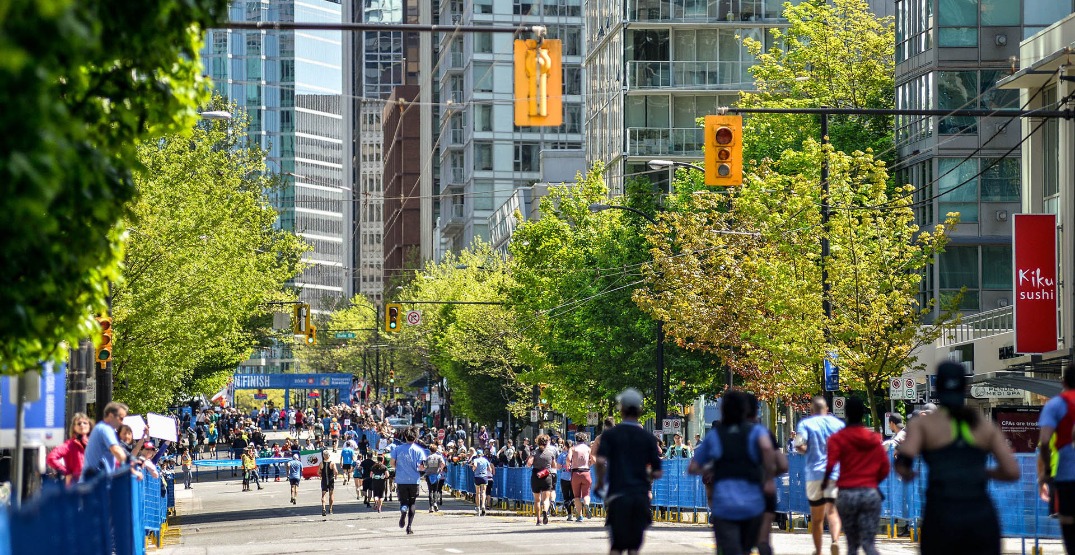 The southbound lane will be closed on Cambie Street from King Edward Avenue to West 49th Avenue beginning at 8 a.m. and ending at 9:30 a.m. on race day.

Only local traffic may use Granville Street or Oak Street from West 41st Avenue to West 57th Avenue between 7:30 a.m. and 9 a.m. on Sundays.

From 8 a.m. to 10 a.m., the westbound lane of West 49th Avenue from Southwest Marine Drive to Cambie Street will be closed.

The same will apply to the westbound lane of Southwest Marine Drive from Camosun Street to 49th Avenue, beginning at 8 a.m. and ending at 10:15 a.m.

During the same period, West 41st Avenue, from Crown Street to Camosun Street and Southwest Marine Drive, will be closed.

From 8 a.m. to 10:30 a.m., Camosun Street from Southwest Marine Drive to West 29th Avenue will also be closed, with drivers and pedestrians encouraged to use Dunbar Street instead.

Ahead of Sunday @BMOVanMarathon please note that a number of roads providing access to #PacificSpiritRegionalPark will be closed to vehicle traffic between 8:30 a.m. and noon. These include NW Marine, SW Marine, 16th Ave, Camosun St. & Imperial Dr. https://t.co/5jBM2uhQL0

And from 8:45 a.m. to 11:30 a.m., the northbound lane of Northwest/Southwest Marine Drive from Chancellor Boulevard to West 16th Avenue will be closed.

Only local traffic will be able to use West 41st Avenue and Dunbar Street.

There will be a block party at Kitsilano Beach on Cornwall Avenue to celebrate the whole event on Sunday, resulting in closures.

Only local traffic will be permitted during this time on West 4th at Trimble Street and at Belmont Avenue and Marine Drive.

From 9 a.m. to noon, Discovery Street from Northwest Marine Drive to Belmont Avenue will be blocked.

Eastbound lanes on West 4th Avenue from Northwest Marine Drive to Highbury Street will be open, but one westbound lane will be closed.

Point Gray Road from Highbury Street to Trafalgar Street will be closed from 9:30 a.m. to 12:45 p.m.

The Burrard Marina near Whyte Avenue and Chestnut Street is only accessible via Cypress Street during this time. 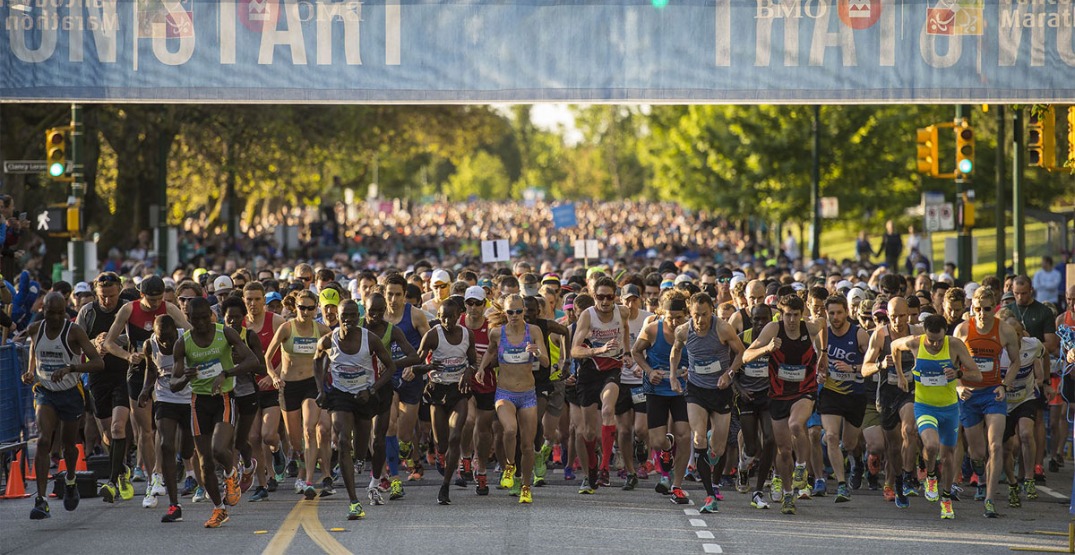 At 6:30 a.m., the northbound lane of the Cambie Street Bridge from West 2nd to Pacific Boulevard will be closed, but the southbound lane will be open.

The northbound lane of the Dunsmuir Viaduct will also be closed from 6:45 a.m. to 8:45 a.m. Use Main Street to West Hastings Street instead.

Beginning at 9 a.m. and ending at 1:30 p.m., the Burrard Street Bridge will have its southbound lane closed and two northbound lanes will be open from Cornwall Street to Pacific Street.

Finally, from 7:30 a.m. to 12:45 p.m., Denman Street from West Georgia Street to Seawall will be closed, with only local traffic allowed via Bayshore Drive to Cardero Street.

East Pender Street from Columbia to Homer will see the eastbound lane closed and the westbound lane open.

And Quebec/Columbia Street from 1st Avenue to East Pender Street will see the southbound lane closed and the northbound lane open to local traffic. 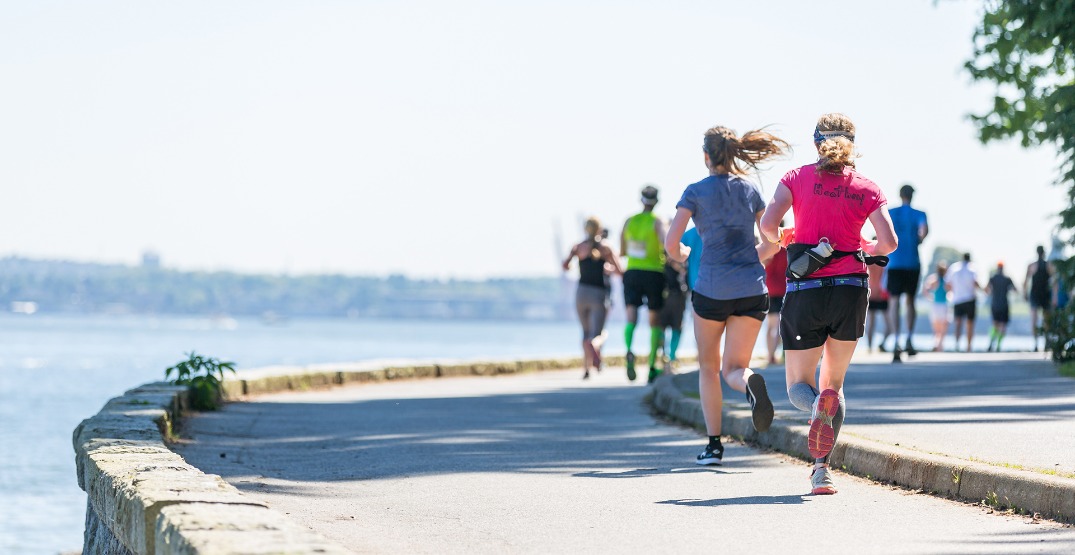 It’s time for another block party! This will take place on Sunday in English Bay, along Beach Avenue and Gilford Street.

From 7 a.m. to 9:15 p.m., these streets will be closed: Granville Street from Beach Avenue to Pacific Boulevard, and Rolston Street and Continental Street.

Only the westbound lane will be open to local traffic on Beach Avenue from Granville to Jervis.

The eastbound lane on Beach Avenue from Denman Street to Stanley Park Drive will be closed from 7 a.m. to 9:45 a.m.

Finally, the eastbound lane will be closed — and westbound will be open — on Pacific Street from Burrard to Bidwell on Sunday from 9 a.m. to 1:30 p.m.

All roads in Stanley Park will be closed, but the roadway will remain open. The Stanley Park Seawall will also be fully or partially closed, according to BMO Van Marathon. website.

RUNVAN is working with the City of Vancouver, Vancouver Police Department, Vancouver Park Board and TransLink to ensure the marathon runs smoothly.

“No parking” zones will also be set up along the route early in the morning on Sunday.

“Traffic control personnel will be stationed at major intersections and access points along the race route to safely manage and redirect traffic,” the website reads.