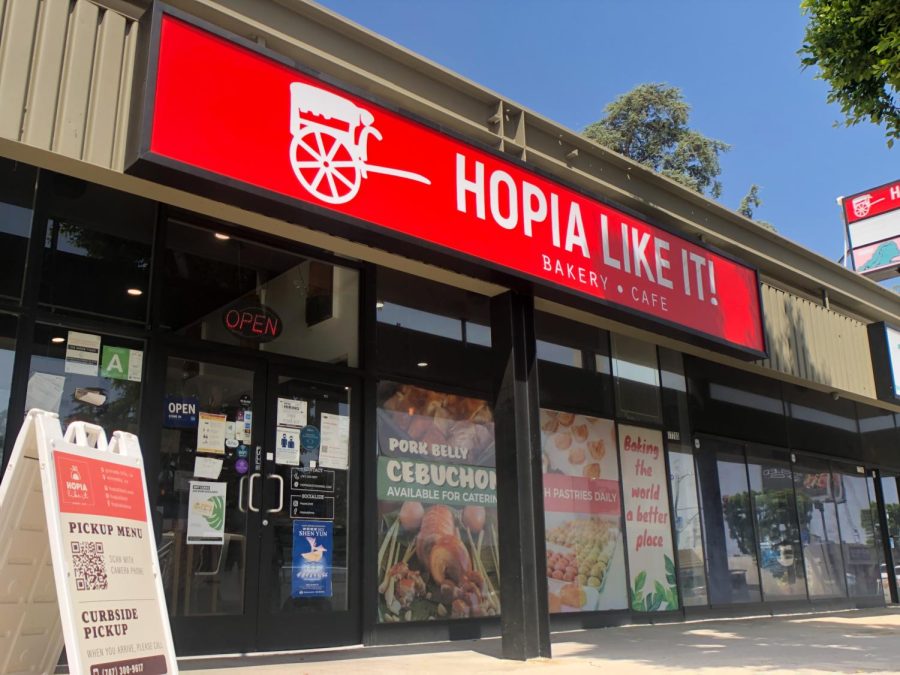 The facade of Hopia Like It in the Granada Hills neighborhood of Los Angeles, California, on April 10, 2022.

Sweet, flaky, and bursting with flavor, hopia is a cake-like pastry that has turned into a fan favorite in the realm of Filipino cuisine. Similar to lumpia, a spring roll typically filled with pork and mixed vegetables, hopia has grown in popularity as a Filipino comfort food staple.

Since 2015, Hopia Like It has been serving the Los Angeles community with a blend of authentic recipes and unique interpretations of Filipino cuisine. Standing out the most on their menu is their freshly baked hopia, hence the name of the bakery.

Their diverse range of flavors range from classic mung bean and ube hopia to more experimental Nutella and apple-cinnamon toppings. Regardless of the type of hopia being nibbled on, Hopia Like It serves customers an edible bite of nostalgia, especially for those who grew up in the Philippines.

“We hear our customers say all the time that they’re just happy to have a recipe that reminds them of home,” said James Mercado, Creative Director of Hopia Like It. “They tried other recipes that might be somewhere else, but it wasn’t until they tried our hopia that they thought, ‘You know what, this actually reminds me of the Philippines. “”

Hopia Like It seeks to introduce authentic Filipino food to anyone curious to try it, especially younger generations of Filipinos who may not have grown up eating their culture’s food.

Considering that about 48% of Americans have never tried Filipino cuisine, according to a study of ethnic cuisines conducted by YouGov, establishments like Hopia Like It could help expose more people to the wonders of Filipino cuisine.

Even people outside of Los Angeles can get their hopia fix and try other Filipino pastries with the bakery’s online ordering options.

“I think one of the spaces that we really wanted to tap into is to at least be able to provide a place online, and even in-store, for Filipinos and non-Filipinos to learn more about our culture,” Mercado said.

In addition to their pastry specialty, Hopia Like It offers a variety of popular Filipino dishes, including pancit malabon (stir-fried noodles), lechon kawali (fried pork belly), and lumpia.

Before becoming Hopia Like It, the bakery took on a different form as a Panorama City restaurant when Kalesa Grill opened in 1998. Owned and operated by James’s parents, Anette and Gerry Mercado, Kalesa Grill has known its humble debut as a home away from home for Filipinos to eat foods that would typically only be available in the Philippines. With half of California’s Filipino American population residing in Los Angeles, estimated at 506,000, Hopia Like It’s presence in the San Fernando Valley has helped create an accessible taste of Filipino candy.

“When [my parents] started was because they really felt there was a lack of proper representation of Filipino food. There were other Filipino restaurants in the area, but they kind of felt like they had their own twist that they could capitalize on,” Mercado said.

Kalesa Grill later evolved into Bistro Kalesa, a fine dining restaurant that turned into a community venue where patrons could sing along at a karaoke night and people could watch live performances by Filipino artists. .

“I was only 9 years old [or] 10 years but I remember seeing a lot of things happening and Filipino culture was crazy because for me growing up in the US it was like Filipinos were coming but I don’t necessarily know who are these artists. “, Mercado said.

While he was too young to recognize who the musicians were, he felt the restaurant and its events had some significance to the Filipino community in the San Fernando Valley.

“Seeing everyone come showed how popular it was or at least how important it was for these Filipino artists to come to the restaurant and just perform there,” Mercado said.

Bistro Kalesa finally closed in 2007. However, the business was resurrected in 2015, this time as the original Kalesa Grill. The difference is that a bakery was set up as an extension of the restaurant because Anette developed a passion for baking, such as hopia.

After finding success as a companion bakery sharing space with Kalesa Grill, Hopia Like It added another location when it opened its first standalone location in Granada Hills in 2018.

“Granada Hills is still getting used to the presence of a Filipino bakery. But we’re starting to get a lot more traffic that’s not Filipino and it’s starting to grow a little fairer outside of that Filipino community,” Mercado said.