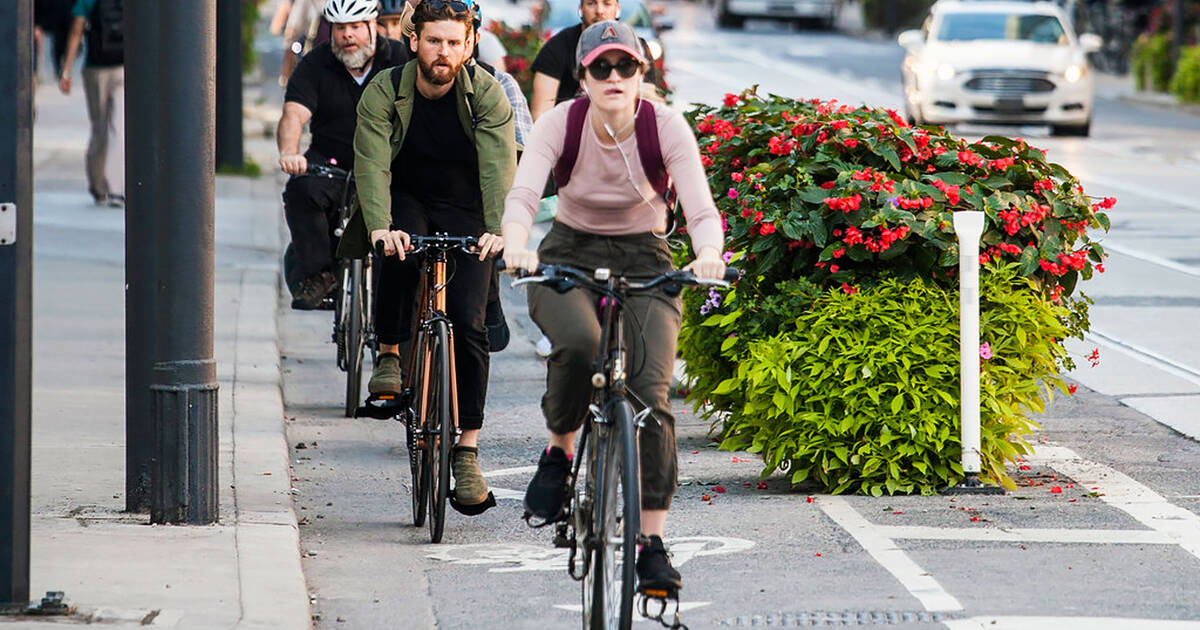 While it’s safe to say the city has done some work to promote safe cycling, there are still a number of areas across Toronto that are downright scary to cycle through.

We’ve rounded up some of these intersections to help you take precautions if crossing them.

Thanks to ongoing construction in and around the West Toronto Railpath, the bike paths on this stretch of Bloor are coming to an abrupt end; which means that cyclists will have to quickly merge into the traffic lane and cycle in single file with vehicles.

To make matters worse, once cyclists traveling west leave this lane trap, they must fight off more construction beyond Dundas West, where cycle paths are often blocked by machinery, or else, stop suddenly.

Avid cyclist Robert Zaichkowski tells blogTO that construction under and around the bridge has been going on for more than two years now.

The huge hill on Dufferin (between St. Clair West and Davenport) is extremely steepwhich isn’t ideal for cyclists, and we all know how congested the road gets at peak times, especially with TTC buses on one of the city’s busiest routes.

A few minutes further at Lansdowne and Davenport, you can expect to see reduced lanes very quickly, which means drivers can be quick to cut off bikers all together.

This intersection is also home to the ghost bike memorial to Tom Samson, an elementary school teacher who was hit and killed by a vehicle in 2012.

This busy Etobicoke intersection is a skinny biker’s nightmare.

Cyclists will encounter a very small cycle lane when traveling in either direction as cars race down a small ramp to catch Dundas Street.

If you’re in someone’s blind spot, you could possibly get swept aside as they try to merge.

Zaichkowski calls this intersection “scary” to cycle through, having done it several times. Not to mention that Royal York is notorious for speeding, which often treats the long drive like a freeway.

This is a stupidly busy intersection in the east end, with a majority of cars merging onto Lakeshore from the highway.

These cars often turn left on Carlaw and end up clipping the bikes or not noticing them at all. It is also a well-known place for collisions.

It happens too often here. I even saw a car drive out of Carlaw and hit a cyclist using the bike path along Lakeshore.

An advanced green light or a turning light at the intersection allows cars to turn left, however, many cyclists report that drivers continue to turn even when not permitted.

Of course, there are many more streets worth recognizing, so we give special mention to: Danforth and Kingston; Yonge and the 401; Adelaide and Widmer; Bloor and Sherbournel; the Queensway from Parklawn to Roncesvalles; and, Sheppard and Addington, for being so remarkably terrible.

While Zaichkowski admits the city has done recent work to make cycling safer (like the Bloor-Danforth corridor and the Midtown Yonge rider), he says Toronto still has a lot of work to do to catch up to Montreal and Vancouver.

For construction zones, he recommends that the City set up protection routes.

“Since it’s an election year and we [have] seven neighborhoods open, I encourage those who want safe streets to get involved. We need everyone on deck,” he said.