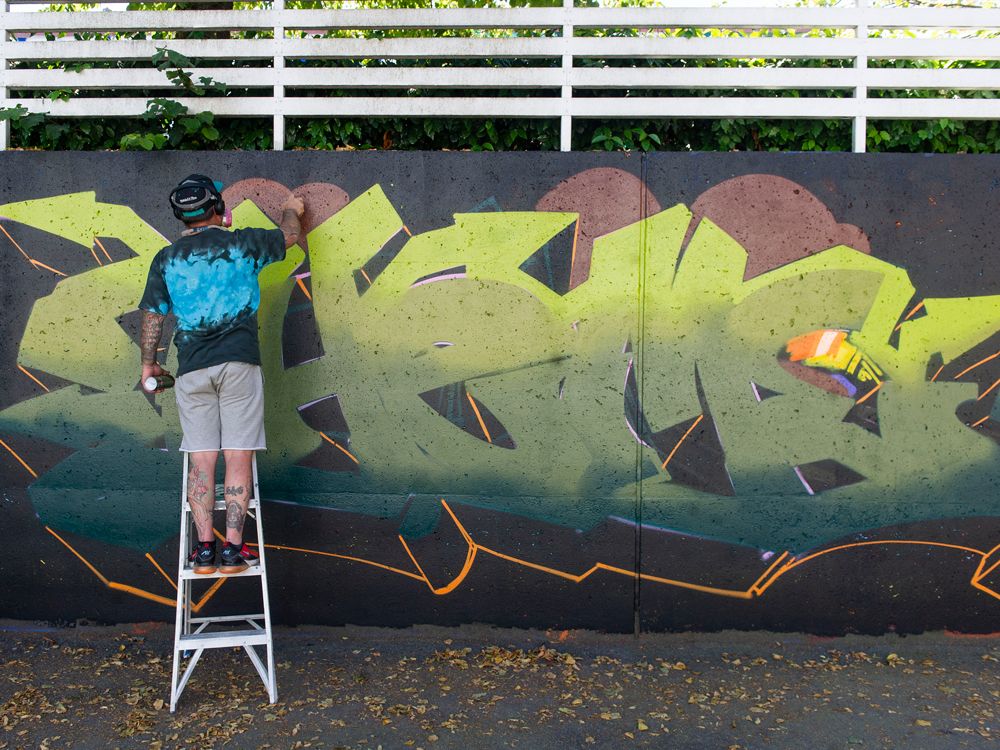 The sound of spray cans and the smell of paint drifted down an alleyway west of Main and E. 5th on Saturday as graffiti artists painted five-foot sections of a parking lot wall.

Brightly colored – and often very abstract – letters in pink, blue and yellow took shape on a black painted wall. An adjacent wall with a purple and red background had a large black and white portrait of a smiling young man, his name spelled out in two-foot-tall white letters: Holden.

The stage was the site of the fifth annual Holden Courage Graffiti Jam, a now regular part of the Vancouver Mural Festival, held in memory of Holden Courage, a young graffiti artist who died in 2015 at the age of 21.

“We were in contact with Holden’s mother and she works with the VMF to put this all together every year,” said a local graffiti artist. Jnasty, which organized the artists for this year’s Graffiti Jam. “They asked if someone like me could bring artists together – and we did.”

Because graffiti is illegal, all of the artists we spoke to for this story asked that they be identified only by their graffiti names.

The project is funded by the Holden Courage Memorial Fund for Artistswhich was created by Courage’s mother, Tara McGuire, after her death.

In a blog post as of 2017, McGuire wrote about what graffiti meant to her son.

“Holden loved graffiti,” she wrote. “He loved everything about it. The creativity, the smell, the camaraderie, the rebellion, the music, the danger, the color, the risk and the thrill.

Jnasty, originally from Hawaii, said he has been painting for about 25 years. He appreciates the efforts made by the memorial and the Mural Festival to promote street art around Vancouver.

“There’s a lot more going on now in Vancouver,” he said of street art, noting that cities like Toronto have a much bigger street art culture. “I’m just happy that Vancouver is starting to do things like that.”

Local graffiti artist Tars, who said he has been painting for more than two decades, agreed, noting that it can be difficult for local street artists to find opportunities.

“Vancouver doesn’t offer too many opportunities for graffiti artists,” he said. “This event is a really good opportunity to do our own thing.”

Virus, a local graffiti artist who said he’s been painting since the late ’80s, relished the opportunity to revisit his early passions and connect with old friends, though he acknowledged worries about gentrification.

“I can’t do that much. I have other responsibilities now,” he said. “So for me, it’s just getting together with friends.”

He noted that large public works of art add value not only to the neighborhood, but also to real estate prices. “I feel like artists should be compensated for this.”

Victoria’s graffiti artist Theme, who has attended the festival on two other occasions, said he was impressed with the festival’s impact on the neighbourhood.

“Every year there are new (murals) that go up,” he said. “It’s crazy the transformation it has had on the city.”

Every artist Postmedia spoke to said they enjoyed the sense of community and camaraderie fostered by the festival.

“I haven’t seen these guys in a year,” Virus said. “We have been through some crazy times. And now we are here.