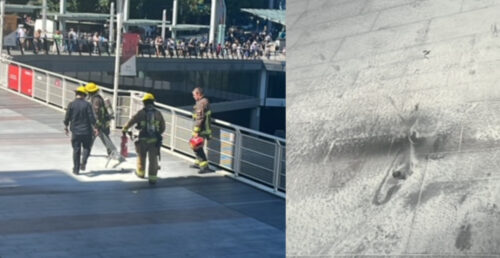 “We responded to make sure the bike was completely off,” VFRS Public Information Captain Matthew Trudeau told Daily Hive.

Firefighters say no one was injured and the cause is not known at this time. The identity of the owner of the e-scooter is also not known.

Firefighters hose down an electric scooter (Submitted – Sukhwant Dhillon / AM 600)

In video captured at the scene, firefighters are seen using fire extinguishers outside the Vancouver Convention Centre. One of them drags the scooter and proceeds to spray it completely.

#electric scooter caught fire at Place du Canada. No one was hurt. pic.twitter.com/9uin02Z9SN

In a tweet, VFRS warned people never to overcharge the batteries or leave them unattended while charging. In 2022, lithium-ion battery fires became the number one cause of fire fatalities in Vancouver, prompting a press conference in June.

Lithium-ion battery fires are the number one cause of fire fatalities in the city of Vancouver in 2022. 5 people have died so far this year. Never overload, modify or leave unattended while charging. Always use manufacturer-approved replacement devices.

Most problems occur when people charge the battery with a cable that is not approved for use in Canada or that is damaged. Buying a charging cable or replacement battery online can be cheaper and more attractive. But Trudeau urged customers to opt for a manufacturer-approved option, even if it means spending more.