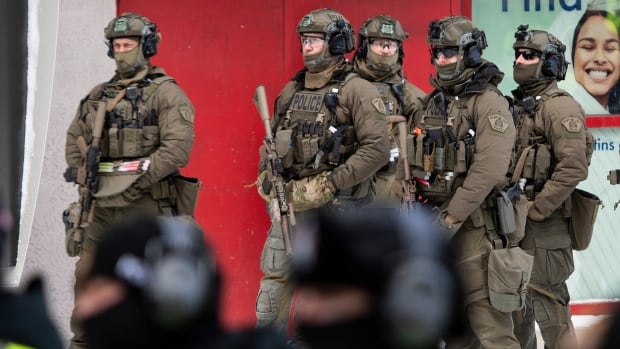 Government officials – including the heads of Canada’s spy agency and the RCMP – will take questions Tuesday night about the circumstances that led the Liberal government to unleash never-before-used emergency powers to quell protests in Ottawa earlier this year.

The federal government invoked the Emergency Act in February during the Freedom Convoy, giving it temporary powers to deal with lockdowns and protests over pandemic restrictions.

Public Safety Minister Marco Mendicino, Director of the Canadian Security Intelligence Service David Vigneault, RCMP Commissioner Brenda Lucki and Ted Gallivan, Executive Vice-President of the Canada Border Services Agency, are scheduled to appear before a special joint committee of MPs and senators to review the use of the Emergencies Act starting at 6:30 p.m. ET.

Attorney General David Lametti and Department of Justice officials will then answer questions.

Prime Minister Justin Trudeau argued at the time that invoking the Emergencies Act was necessary to address “serious challenges to law enforcement’s ability to effectively enforce the law.”

“This is about keeping Canadians safe, protecting people’s jobs and restoring trust in our institutions,” he said in mid-February.

The unprecedented rollout of the Emergencies Act has authorized a ban on traveling to protest areas, banned people from bringing minors to unlawful assemblies and allowed banks to freeze the accounts of some of those involved in the demonstrations. It also allowed the RCMP to enforce municipal by-laws and provincial offenses as needed.

Lucki said the legislation had helped his officers control protests against the anti-vaccine mandate in the capital’s city center.

“So for us, operationally, it was about reducing that footprint in Ottawa and the only way to do that was to keep people out or induce them to leave,” he said. she said in February.

“We used it as a big deterrent to people coming to the area.”

Tuesday’s committee is separate from the investigation announced Monday into the use of the Emergencies Act.

Trudeau has appointed former Ontario Superior Court judge Paul Rouleau to lead this independent public inquiry – the Emergency Public Order Commission – as it examines the events leading up to the invoking the Emergencies Act and making recommendations “to prevent these events from happening again.” says a government statement.

Opposition conservatives argue the investigation is too focused on protesters’ actions and the role fundraising and misinformation played in the event.

“The Liberal government is doing everything in its power to ensure that this investigation is not material and does not hold it accountable,” a joint statement from Tory MPs Raquel Dancho, Dane Lloyd and Gerard Deltell said Monday.

According to the law, an investigation into the use of the act must be opened within 60 days of the revocation of the declaration.

When asked what information would be released during this investigation, Government House Leader Mark Holland said the government must consider both transparency and national security.

The order in council that establishes the rules of the investigation asks the commissioner to avoid disclosing information that could be “injurious” to international relations, defense and security of Canada.

“We have two competing interests,” Holland told reporters Tuesday ahead of a cabinet meeting.

“The most important thing we can do is make sure the public has all the information they need to see clearly why decisions were made and how they were made. But we also know we need to protect national security. Those are tough things to balance.”

Rouleau’s final report is due to both houses of parliament by February 20, 2023.