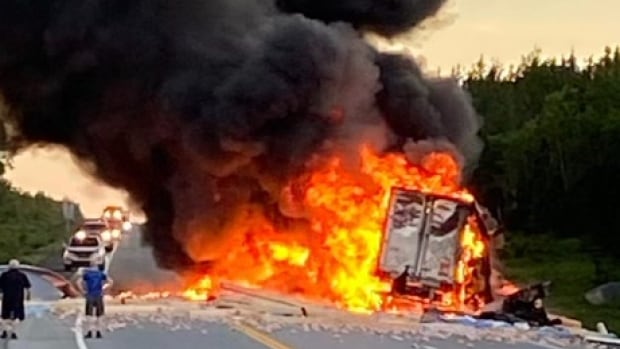 Both trucks were carrying heavy loads and caught fire, according to the Royal Canadian Mounted Police.

“Apparently there was an explosion,” said Bishop’s Falls Fire Department Chief Gary Harnum, who added that firefighters were called to the scene just before dark.

Harnum said there were lots of flames and thick black smoke billowing from both trucks as they approached the collision.

While he said it only took firefighters 10 or 15 minutes to put out the blaze, Harnum called the accident serious.

“It was probably one of the most significant accident scenes for a fire in a long time,” he said.

He said there was burning fuel and rubber, as well as a log house on top of one of the tractor-trailers, leaving a big mess along the road to clean up.

Police expect the road area between exits 21 and 22 to be closed for several days while police deal with and clean up the scene.

Traffic is still being diverted through Bishop’s Falls. Harnum asked motorists to slow down when crossing the city.

Police are asking any witnesses or anyone with dash cam footage to contact the RCMP in Grand Falls-Windsor.