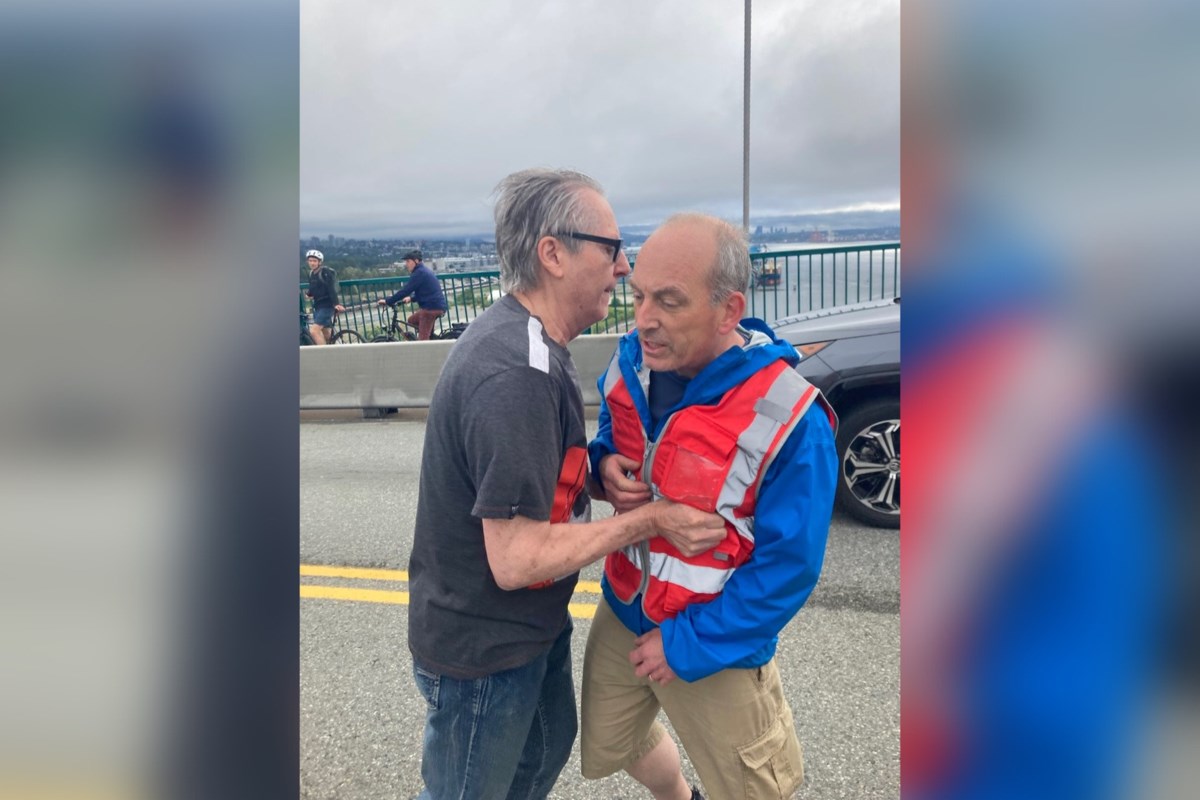 “Who cares about climate change? an angry driver shouted during a verbal altercation after protesters blocked traffic on Vancouver’s Lions Gate Bridge on Wednesday.

Drivers who had been blocked from crossing the bridge during rush hour around 7:30 a.m. got out of their cars and began giving two protesters who had parked a van in both lanes of traffic a piece of their minds.

A man who said he was a ‘former lumberjack’ ripped a protest sign off the side of the van and shoved one of the protesters. “I’ve been in logging all my life. You don’t know how the world works,” he said.

A woman told protesters they were not helping to win public sympathy for their actions.

“You make people angry,” she said. “No one is going to walk away from here saying, ‘Let’s support these guys.’ You are pissing us off.

Another driver raised his fists above his head shouting, “Who gives a damn about climate change? adding, “You made your picture, you made your point. Now get out of here.

Two old shoot protesters, including a North Vancouver man, were arrested on charges of mischief and “intimidation by blocking a road” by Vancouver police after officers arrived at the scene.

This is not the first time that forest demonstrators have disrupted traffic on a bridge on the North Shore.

Traffic was disrupted on Highway 1 in West Vancouver on June 14 when three protesters blocked the westbound lane near the Horseshoe Bay ferry terminal, sticking to the road.

On June 13, another protest by the group Save Old Growth blocked the passage of the Ironworkers’ Second Narrows Memorial, while a simultaneous protest also blocked the Massey Tunnel.

Ben Holt, a 52-year-old computer programmer and resident of North Vancouver, was one of the protesters arrested by police during the recent blockades of Horseshoe Bay and the Lions Gate Bridge.

Holt recently told the North Shore News that he understands the frustration his actions are causing drivers, but said he felt he had little choice if he wanted to draw attention to the cause of the crash. cessation of old logging.

Holt said the protests are getting attention — which is more than writing petitions and taking action within the political system.

“I would ask the audience, before they get out of their car and face people, to take a few deep breaths – to think about what they’re doing. And think about why the protesters are there,” he said.