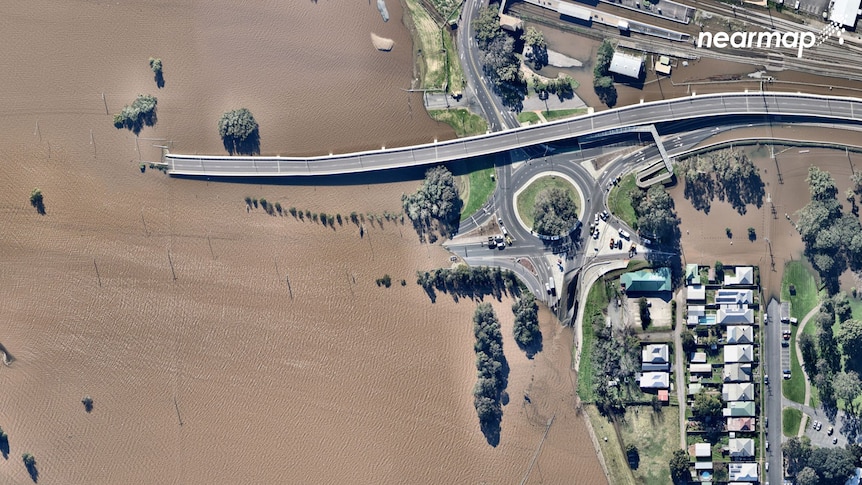 The extent to which floods cut off several roads in the NSW Hunter region a week ago has been captured in aerial imagery.

The images released by Nearmap were taken before the flooding in Maitland, Singleton and some rural areas cut by flooding, and again on Friday July 8 when the Hunter River crested.

The New England Highway, which connects several major regional centers to the east coast, was cut off in Maitland.

On the outskirts of Newcastle, Maitland is home to more than 90,000 people and the road closure has caused heavy traffic on all sides.

The flooded highway intersection to the south was Cessnock Road, which was also under water.

It connects to the suburb of Gillieston Heights, the isolated suburb that relied on the state emergency service to transport supplies until Tuesday.

The closure of Cessnock Road has resulted in increased traffic further south on Buchanan Road between Kurri Kurri and Maitland.

Cessnock Mayor Jay Suvaal called for the busy thoroughfare to be turned into a national highway.

“This area is not really suitable for the high level of trucks and the like,” he said.

“Traffic there has increased over time through development and together with the Hunter Highway it is now the main road to Maitland Hospital.”

Singleton’s sports fields, including netball courts, were squarely in the path of the Hunter River when it overflowed.

The swollen Hunter River has crept into the backyards of these homes in the Singleton suburb of Hunterview.

The Lower Belford road was overrun by the Hunter River.

Flooding peaked higher than the March 2022 flood, and federal disaster payments were extended to several local government areas on Tuesday, including Newcastle, Port Stephens and Muswellbrook.