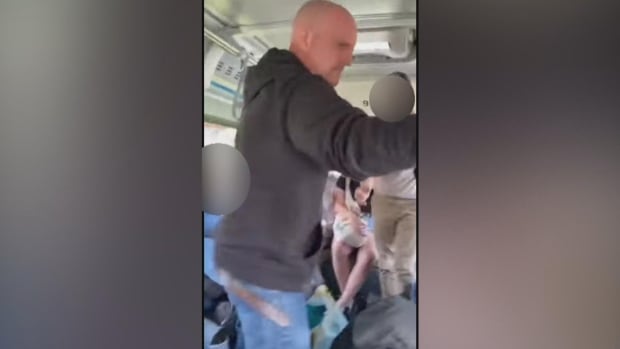 Several BC mayors are calling for tougher action on chronic violent offenders across the province, an issue highlighted by a recent assault on an Abbotsford bus.

This isn’t his first encounter with the law: Lucas has a lengthy criminal record dating back to 1999, according to court records.

But after he was arrested and charged over the bus incident, Abbotsford police say Lucas was released on a series of court-ordered conditions – which Tristan L’Esperance, one of the victims of the bus aggression, judge disturbing.

“I fear this situation will happen again,” L’Espérance said.

“That’s what I immediately thought when we found out he was out on bail…he’s going to seriously hurt someone.”

BC mayors recently called on the province to fix the problem.

Mayors of 13 urban municipalities are calling on the BC government to take action against repeat offenders across the province. @jonvhernandez to the story pic.twitter.com/8thuMNGroY

A call to crack down

In April, Walt Cobb, mayor of Williams Lake in the Central Interior, traveled to Victoria to meet with cabinet ministers to make a similar request.

That same month, the BC Urban Mayors’ Caucus, made up of mayors from 13 municipalities representing more than half of the province’s population, also drafted a letter to Public Safety Minister Mike Farnworth and Attorney General David Eby demanding action on the matter.

In the letter, they said police data shows that most offenses in British Columbia are committed by a small number of highly active offenders.

As an example, they said, of the 81 prolific offenders – each with more than 10 convictions – monitored by Abbotsford police, 50 have more than 30 convictions. In Vancouver, they said 40 “super chronic” offenders had an average of 54 convictions per offender.

They also proposed several solutions, including stricter bail conditions and consequences for repeat offenders, and the establishment of community courts, which provide a more meaningful response to assist and convict offenders through a combination legal, social and health care services.

The letter was shared by the BC Liberal Party on April 26, as Leader Shirley Bond called for action on BC’s NDP government during Question Period.

In response, Attorney General David Eby said the government was taking the concerns seriously and was in discussion with local leaders on how to resolve the issues raised.

Kelowna Mayor Colin Basran, co-chair of the caucus, said the group has no plans to make the letter public, although he is satisfied so far with the responsiveness of the NDP government to the British Columbia to their concerns.

Kelowna Mayor Colin Basran talks about a letter he, along with a dozen other mayors, sent to the BC government earlier this month about community crime. 6:09

But he also said it was important for the government to act, a sentiment echoed by caucus co-chair Victoria Mayor Lisa Helps.

“There is a serious concern about repeat offenders and repeat offenders who seem to continue to navigate the justice system … from the streets, to the courts, to prison and back again,” she said.

Basran said the BC Urban Mayors Caucus received the statistics shared in the letter from city staff working in conjunction with local police, and was “confident” they were accurate.

But Simon Fraser University criminologist Martin Andresen pointed out that the police had a motivation to amplify the statistics, to make crime seem like a bigger problem than it actually is.

Andresen was responding to a statement from Vancouver Police Chief Adam Palmer last month, who said the city was seeing an increase in violent crime — a statement that helped restore $5.7 million in funding to its budget.

Andresen said that while police statistics show some increase in criminal activity in individual Vancouver neighborhoods, there was no indication of an overall “increase”.

However, Vancouver Mayor Kennedy Stewart said that although crime statistics in British Columbia are low compared to other North American jurisdictions, “if you are a victim of crime, it is not the case”.

“Statistics are good context, but I think we need to listen to people who don’t feel safe in the city and see what else we can do to help them,” he said.

Andresen suggested that resources could be better directed to providing social supports and substance abuse treatment for chronic offenders, as many struggle with mental illness or addiction.

“Locking these people up in prisons as a solution to revolving door syndrome ignores the reality that these are people with mental health issues, addiction issues…prison tends to make those things worse,” Boyd said.

According to Attorney General David Eby, BC mayors have observed that the recent wave of crime has been concentrated in highly visible areas of the city center and is often associated with mental health and addictions issues.

Overall crime rates in the province, he told CBC Sunrise South, decreased except in some categories, such as threats and minor assaults.

“[The mayors] are really at their wit’s end about what they see,” Eby said.

A spate of violent attacks on strangers in Vancouver has police concerned about public safety as the city seeks solutions to the growing problem. 2:03

Eby suggested several steps the province could take, including assigning the same Crown prosecutors to repeat offenders each time they are arrested, to help provide the full context of their crimes to judges who decide how they will be punished.

He also said the province is opening complex care services to help with mental health and addictions issues, and suggested involuntary care may be warranted in certain circumstances.

“It’s going to take working with experts in the area and working with mayors to be creative about how we get people into this treatment.”

The first edition8:31Why is there such a disconnect between crime statistics and feelings about crime in Vancouver?

Criminologist Martin Andresen talks to Stephen Quinn about what he believes is an agenda by Vancouver political forces to advance the crime narrative ahead of a municipal election. 8:31

The first edition8:39B.C. Attorney General defends Crown attorney and office against claims that legislative changes are too permissive for repeat offenders

David Eby discusses with Stephen Quinn complaints that the courts in this province do not punish criminals harshly enough. 8:39