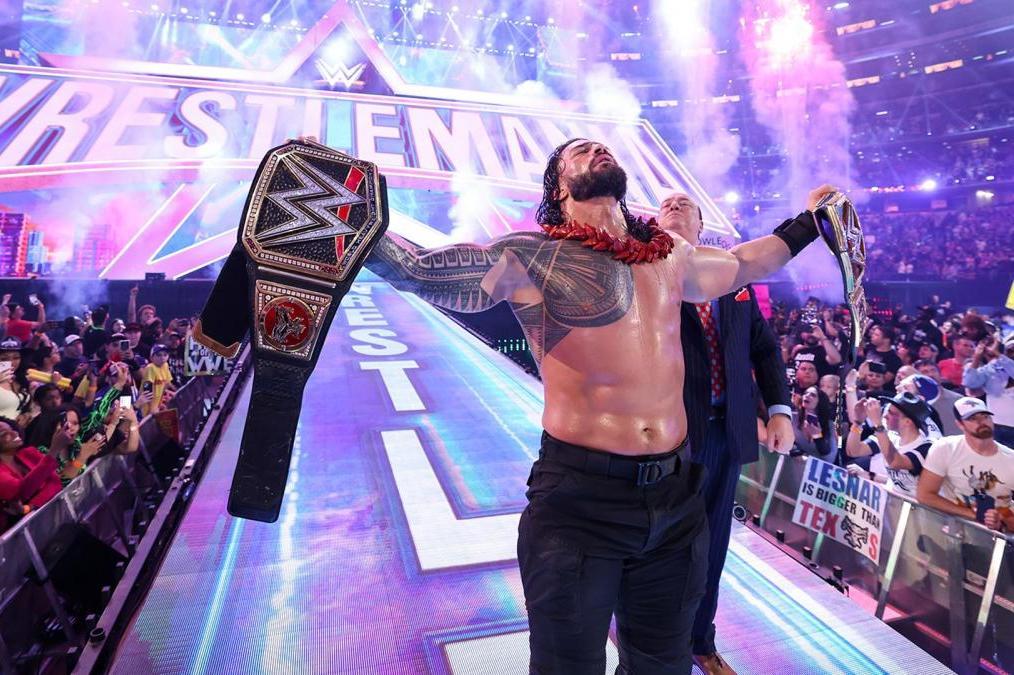 Who’s next for Undisputed WWE Universal champion Roman Reigns on the Island of Relevancy?

It was the question at the heart of Friday’s episode of SmackDown on Fox, the first since a blockbuster WrestleMania 38 that saw The Tribal Chief defeat Brock Lesnar in the Winner Takes All main event.

Who stepped up to the plate to challenge The Head of the Table and what other stories did WWE have in store for its fans on the first episode of blue brand television following the biggest night in sports-entertainment?

Find out now with this recap of the April 8 broadcast.

On the heels of a disappointing, controversial loss to Charlotte Flair at WrestleMania Saturday, Ronda Rousey kicked off Friday’s broadcast with a no-nonsense promo. She placed the blame solely on herself, but expressed a desire for a rematch; an I Quit match.

Flair laughed the challenge off, questioned Rousey’s moniker and told her rival to get to the back of the line. A defiant Rousey promised to inflict pain next time they met up.

The promo was far from dynamic and carried mostly by The Queen. Rousey appears to have lost the confidence she had on the mic during her last run and nothing she has been given to say of late has done much to help her rediscover it.

At the least, the promo did what it set out to: advanced the feud and set up a potential blockbuster rematch.

The contest put over the tenacity of the heel and the resourcefulness of Woods, who scored a small package rollup (renamed The Back Woods by Pat McAfee) for the win.

After the match, Butch teed off on his own teammates before perching himself on the top rope and pouting, “like a child,” Michael Cole said on commentary. In that regard, this match was as much about establishing the Butch character as the match itself. Considering that no one really knew what that persona was meant to be when it suddenly popped up on television, it was nice to see some development of it this week.

Backstage, Sami Zayn talked to Adam Pearce about his WrestleMania loss and managed to put his own foot in his mouth, vowing to fight the next wrestler to walk through the door. That guy? Drew McIntyre.

In the arena, poor Joe Alonzo had the unenviable task of battling Gunther in his first match as a main roster star. Ludwig Kaiser, formerly Marcel Barthel in Imperium, accompanied The Ring General for the one-sided enhancement match.

Gunther punishing fools will never not be entertaining. He completely overwhelmed his opponent, gobbling him up and putting him away to earn the win in a solid main roster introduction. Kaiser, himself, is a strong in-ring competitor and two-time NXT champion. Hopefully, he has the opportunity to get some ring time of his own to better establish himself.

A distraught Happy Corbin made his way to the ring for Happy Talk, seconded by a much more enthusiastic Madcap Moss.

Corbin blamed his loss to Drew McIntyre on Moss and claimed he was too busy making WrestleMania all about him. Unimpressed by Moss’ jokes, Corbin berated him as the crowd sang “Madcap Moss!” in support of the Andre the Giant Memorial Battle Royal winner.

Moss answered with a joke, the punchline being Corbin as the two severed their partnership. The jester attacked Corbin to the delight of the fans and the team brawled, ending with Moss getting the best of his associate and destroying the Happy Talk set.

Say what you will about the Happy Corbin character and the creative leading into WrestleMania but the crowd’s reaction to Moss and his split with his charge is proof that it worked. The fans in attendance Friday were on the run for Moss, treating him like the next big babyface in the company.

Given his work with McIntyre over the last three months, Moss has earned this opportunity.

Sami Zayn struggles to recover from his humiliating loss to Johnny Knoxville at WrestleMania. Drew McIntyre had other plans as The Scottish Warrior pummeled him early and often, even preventing The Great Liberator from escaping up the ramp.

Zayn eventually did escape the grasp of his opponent, dodging a Claymore and running away through the crowd. McIntyre ominously pointed Angela at Zayn to close out the segment.

The match was nothing to write home about but it did set the stage for a rivalry between these two, which could be damn fun if Zayn is allowed to remind fans that he is a talented in-ring competitor. The individual styles of the competitors would seem to mesh well, as would the characters.

If McIntyre is not slated to challenge Roman Reigns next, there are far worse options for him than working with one of the best, most over heels in the company.

Lacey Evans cut a promo afterward that served as a reintroduction to her and her story. It was fantastic, real, raw and emotional. It was what the Sassy Southern Belle persona never was: relatable. The fans reacted accordingly, cheering her as she wrapped things up.

Rhea Ripley was conspicuous in her absence as partner Liv Morgan took to the ring for a match with Sasha Banks, accompanied by Women’s Tag Team Championship partner Naomi. Morgan hoped to turn the momentum in her and Ripley’s favor but to do so, she would have to defeat one of the best wrestlers of her generation, The Legit Boss.

Morgan and Banks delivered a very good match that brought the fans to their feet in support of both women at one point. Banks was the better wrestler throughout and the shock on her face when Morgan countered a superplex into a small package for the win reflected her shock and surprise.

The former Riott Squad member needed that win to avoid the “loser” label, but also to prove to Ripley when the Aussie inevitably turns heel that she is not the weak link of the team.

After days of teasing the WWE Universe with the next step in the Island of Relevance, Undisputed WWE Universal champion Roman Reigns delivered the big reveal: he wants The Usos to go to Raw and challenge for the tag titles so The Bloodline can hold all of the gold.

Shinsuke Nakamura interrupted the proceedings, teasing a feud with The Head of the Table, only to be laid out by The Usos in an anticlimactic end to the show.

The Usos vs. RK-Bro over on Monday nights feels like the most logical next step for both teams given their utter dominance over their respective brands’ tag divisions. We saw the start of that rivalry Monday on Raw when Jimmy and Jey teamed with Austin Theory to defeat Randy Orton, Riddle and Finn Balor, so nothing about that announcement is terribly surprising.

What is surprising is the tease for Nakamura as the next challenger to Reigns’ Universal Championship.

The Artist has spent the better part of the last two years as a tag team competitor, but still has a ton of credibility built up with wrestling fans, thanks to his success around the globe. His reputation precedes him and, more importantly, supersedes some of the questionable booking that has accompanied him in recent years.

Nakamura vs. Reigns is a fresh match-up and, more importantly, has roots back to the 2018 Royal Rumble, when the prospective challenger won the titular match by eliminating the champion. It would behoove WWE to recall that when creating the impression that Nakamura can conceivably defeat Reigns and end his epic title run.