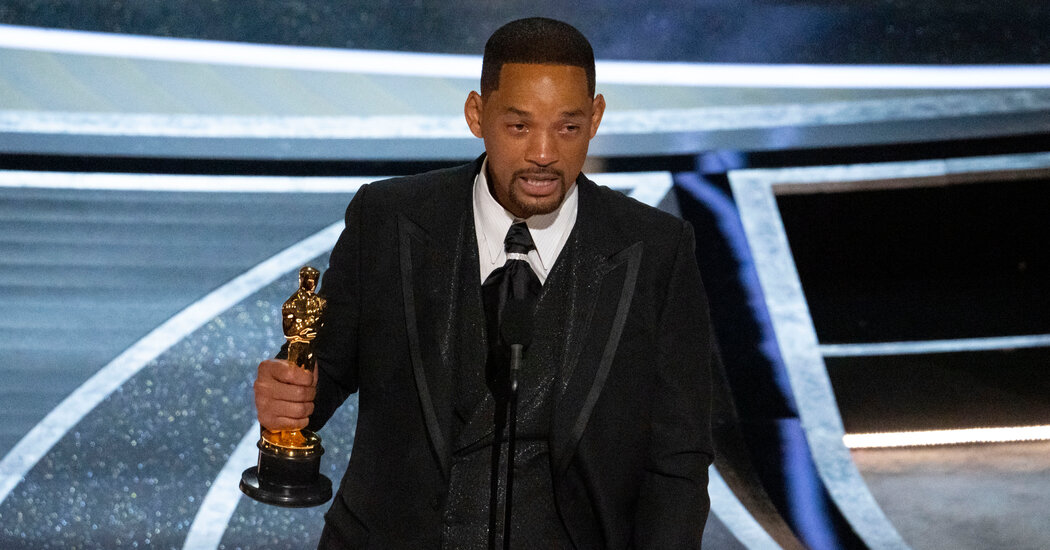 At this year’s Academy Awards, even before Mr. Rock took the stage, Regina Hall alluded to the Smiths’ relationship in a comic bit in which she suggestively asked to personally inspect some of Hollywood’s most eligible bachelors, joking that their Covid test results had been lost. “Will Smith,” she said. “You’re married, but you know what, you’re on the list and looks like Jada approved you. So you get on up here.” He laughed and stayed seated.

What did bring Mr. Smith to his feet, striding purposefully across the room to strike Mr. Rock, was an ad-libbed line about Ms. Pinkett Smith’s shaved head. It stung, Mr. Smith explained later, because Ms. Pinkett Smith has alopecia, which leads to hair loss. “A joke about Jada’s medical condition was too much for me to bear, and I reacted emotionally,” Mr. Smith explained in the apology to Mr. Rock and others he posted on Instagram Monday evening. For his part, Mr. Rock said at his comedy show on Wednesday that he was still processing the event. (A representative for Mr. Smith declined to comment. Representatives for Ms. Pinkett Smith and Mr. Rock did not respond to requests for comment.)

For many viewers and fans, especially Black fans, the incident involving three of the highest-profile Black artists in Hollywood was fraught and did not lend itself to easy judgment. “It’s a really complicated moment, because of all the ways that it resonates with gender and race and power and brand,” said Miriam Petty, a film historian and professor at Northwestern University who studies Black stardom.

Some commentators criticized Mr. Rock for what they deemed a low-blow joke. Others, like the actress Tiffany Haddish, who co-starred with Ms. Pinkett Smith in the comedy “Girls Trip,” applauded Mr. Smith for seeming to defend his wife’s honor, which Dr. Petty characterized as understandable in a world in which Black women and other women of color are not afforded the same social protections as their white counterparts. But was that stance anti-feminist? Did it glorify violence? “Again — messy, messy, messy,” Dr. Petty said.

Since turning 50, Mr. Smith has relaxed, to some degree, his public image. A recent YouTube series, “Best Shape of My Life,” that ostensibly targeted his non-superhero dad bod was really about unbuckling his own strictures of behavior. He has traveled without security for the first time in years; at last learned to swim; and tried to come to terms, after the death of his father in 2016, with the toll that relationship took.

In the statement announcing his resignation from the academy, Mr. Smith said, “Change takes time and I am committed to doing the work to ensure that I never again allow violence to overtake reason.”