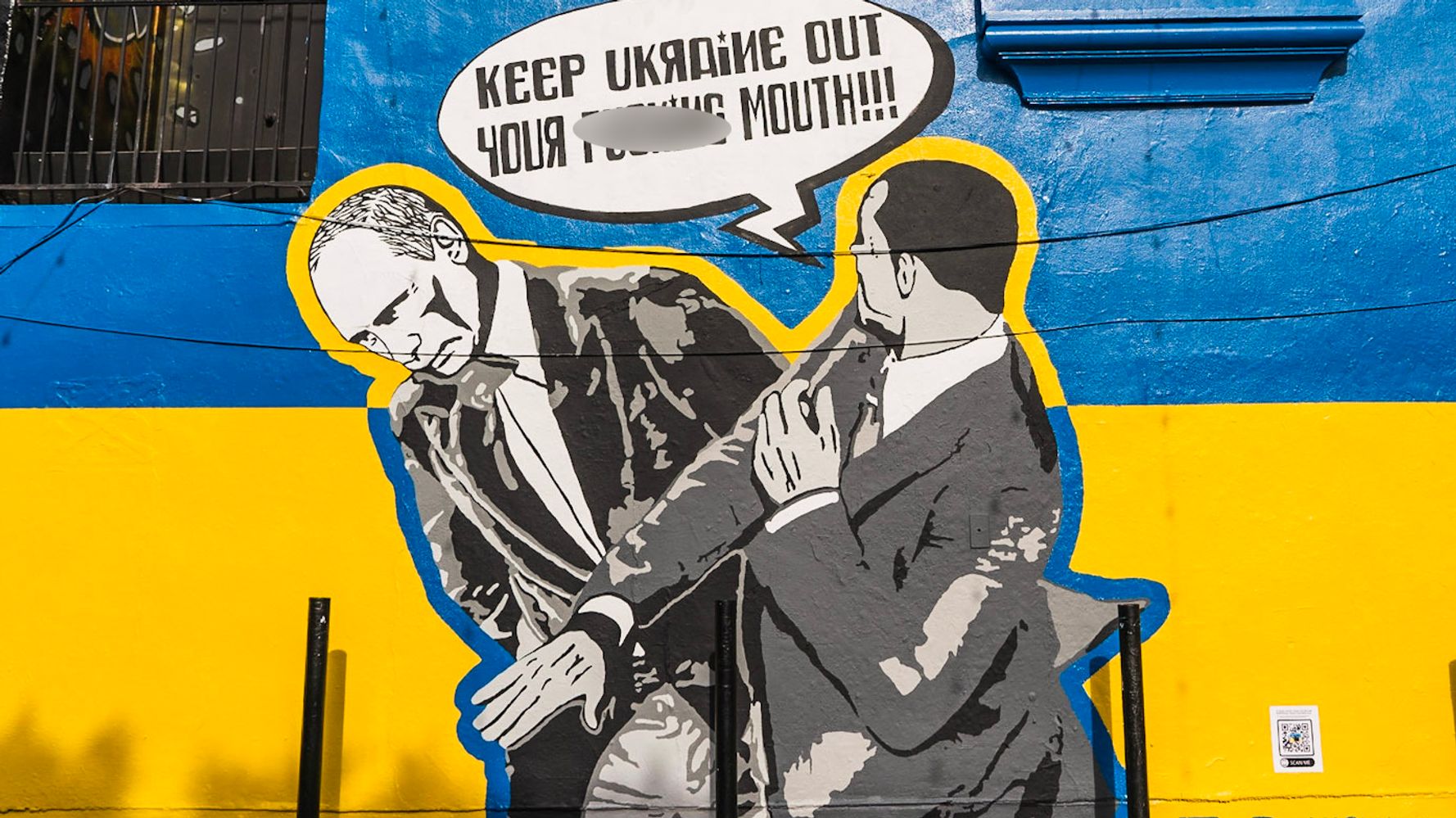 Will Smith’s infamous Oscar slap has been recreated as street art in Los Angeles.

But instead of comedian Chris Rock receiving the pointy end of the actor’s palm, it’s Russian President Vladimir Putin who is knocked down by the ‘Ali’ star in the latest artistic show of solidarity with the Ukraine.

“Keep Ukraine out of your fucking mouth!!!” Smith is described as saying in the piece, a reworking of the actor’s comment to Rock’s joke about his wife, Jada Pinkett Smith.

Todd Goodman, a California-based ESL teacher and artist whose street art nickname is 1GoodHombre, painted the room in the mural-filled Fame Yard parking lot on Melrose Avenue with Ukrainian artists Liza Onatsko, Alex Pilkevych, Sergey Podgurskiy and George Zhyvotovskyi. The space is curated by street artist Corie Mattie, who has gone viral during the coronavirus pandemic with her LA Hope Dealer project. The anti-Putin mural was completed on Sunday.

Goodman wanted to use the scandal surrounding Smith’s slap “to draw attention to this obviously bigger topic of war and the humanitarian crisis facing Ukrainians,” he told HuffPost on Saturday.

“Given the proximity to Hollywood, I wanted to use this moment, this city, this ridiculous situation, to draw attention to the war, in the hopes of not only raising awareness but also raising funds for humanitarian aid. he explained, noting how a QR code next to the mural directs people to GlobalGiving’s Ukraine Crisis Relief Fund.

“If people could only learn to channel their emotions through creative expression, through art, through language, instead of resorting to violence to achieve their goals, the world would be a much better place,” he added. ‘artist. “Make art, not war. My paintings, like a comedian’s words are not violent, they could never hurt another person, only maybe a person’s feelings, and we have ways to deal with hurt feelings that don’t require violence.

Goodman first took his canvas art to the streets in 2020 after being angered by the police killing of George Floyd and tensions surrounding the upcoming presidential election.

“While the city of Los Angeles was quickly shut down, COVID keeping people off the streets, there was an almost endless amount of space and freedom to cover the city in street art,” he recalled . “I had a lot of bullshit to say, and there was plenty of time and space to say it.”

1GoodHombre’s alter ego is a Spanish play on his surname and a direct response to Donald Trump’s disgusting “bad hombres” criticism of Mexican immigrants.

“I was deeply insulted by this, as a human being, but also as the husband of a Spanish-speaking immigrant,” he said. “To counter this kind of hate or evil in the world, I hope this nickname will inspire people to understand that all it takes is a good man, a good person to stand up against evil, against hate, to create a better world, and any of us can choose to be that person every day.

Goodman’s true identity remained unknown until last month, when he “decided to come out into the open in support of Ukraine,” he told HuffPost, for an Associated Press story about pro-Ukrainian street art and its depiction of Ukrainian President Volodymyr Zelenskyy, including this one touting machine guns with the message “Fuck Putin”.

Now? He just hopes the new mural will provide “a moment of catharsis for the Ukrainian people or anyone who is hurting or feeling victimized by Putin’s invasion.”

“I had this feeling of catharsis once in my life, where a work of art just cleansed my soul, as a Jew watching Tarantino’s ‘Inglourious Basterds’,” he said. “My God, after all these years of hearing stories from family members who were survivors, watching documentaries about the Holocaust and ‘Schindler’s List’, finally we were strong, we were fighting back, we were hunting the Nazis.”

“I had never had this feeling before until this moment, and it was absolutely fucking glorious!” he remembered. “That’s the feeling I want to inspire in people: ‘No, fuck this guy, we’re not going to take this shit in the air! Nope! You will not oppress us!