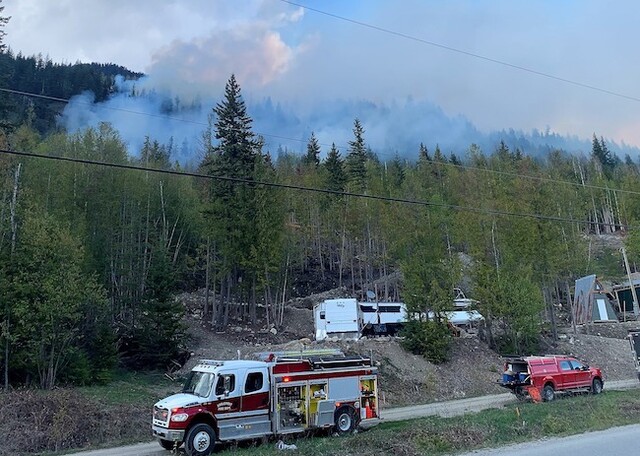 The BC Wildfire Service says the Horseshoe Bay fire is now classified as “held”.

This means fire officials believe it will not spread beyond its current boundary of 18.5 hectares under current conditions.

The Horseshoe Bay wildfire on the north shore of Shuswap Lake experienced “a bit of growth” overnight.

BC Wildfire Service fire information officer Shaelee Stearns said the blaze saw this growth “at the top of the fire”, on steep terrain.

It continues to be charted as having burned 18.5 hectares.

A fire line was successfully placed on Sunday, and ground crews working on the flanks of the blaze were supported by a helicopter carrying equipment to the top of the blaze as well as buckets of water.

Stearns says the Forest Fire Department plans to add more personnel to the fire today, but that number is not yet known.

Stearns says the fire burned at ranks 1 and 2, meaning it is a slow moving, smoldering ground fire.

Cooler overnight temperatures saw little morning activity, but may flare up as the day heats up.

A wildfire that started Thursday on the north shore of Shuswap Lake continues to spiral out of control.

The BC Wildfire Service website shows the fire spread to 18.5 hectares. It had been estimated at 15.7 hectares on Saturday.

The Horseshoe Bay fire near St. Ives is believed to be human-caused.

The Shuswap Contingency Program has no update so far this morning, but has previously said crews should continue to fight the blaze through the weekend.

Twenty BC Wildfire crew members were assigned to the fire, supported by helicopter support.

Fifteen new fires have broken out across British Columbia in the past two days alone.

Eight are at the Kamloops Fire Center, which encompasses the Shuswap and Okanagan.

Four are in the southeast fire center and three in the Cariboo.