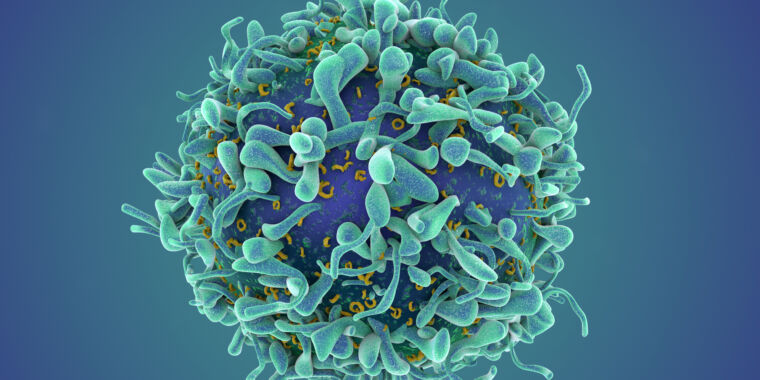 One of the main tasks of the adaptive immune system is to recognize foreign substances in our body and to reject them unceremoniously by causing inflammation. So the fact that it lets around 100 grams of assorted foreign animal and vegetable protein pass through our digestive systems without a glance every day is curious – food allergies are an exception.

The most common explanation for this “oral tolerance” is that immune cells that react to proteins in food are generated but are preferentially killed or otherwise inactivated. But most of the experiments leading to this conclusion were performed with transgenic mice with a severely depleted T-cell repertoire and therefore lacking a normal immune response. New work published in Nature uses mice with normal, functioning immune systems to double-check this finding.

The mice were raised on a gluten-free diet and then challenged with a part of one of gluten’s proteins called gliadin, a protein known to elicit a T-cell response.

(Gliadin is the half of gluten that induces celiac disease; it promotes the generation of antibodies that react to a native protein in our intestines that looks a bit like gliadin. Gluten sensitivity and intolerance can be induced by gliadin and other proteins and saccharides (Wheat allergies are caused by gliadins and other wheat proteins, but the allergies are mediated by a different arm of the immune system.)

A week after the mice started eating the peptide gliadin, their intestines saw a modest increase in T cells that responded to it. A few of these T cells might cause a weak antibody response, but many were regulatory T cells (Treg cells), which are immunosuppressive. Others appeared to be part of a population distinct from all well-understood T cell lineages, but could convert to Treg cells. None of these T cells could cause inflammation. A similar response was seen when the mice were fed a few other bits of foreign protein.

The authors suggest that under normal circumstances, food-sensitive T cells differentiate through this ill-defined “negative lineage” pathway based on local immunosuppressive signals in the gut and, therefore, do not elicit pathology in response to the food.

So why do food allergies happen? Researchers believe that if inflammation is already present the first time you eat something, more active T cells may develop and cause pathology.