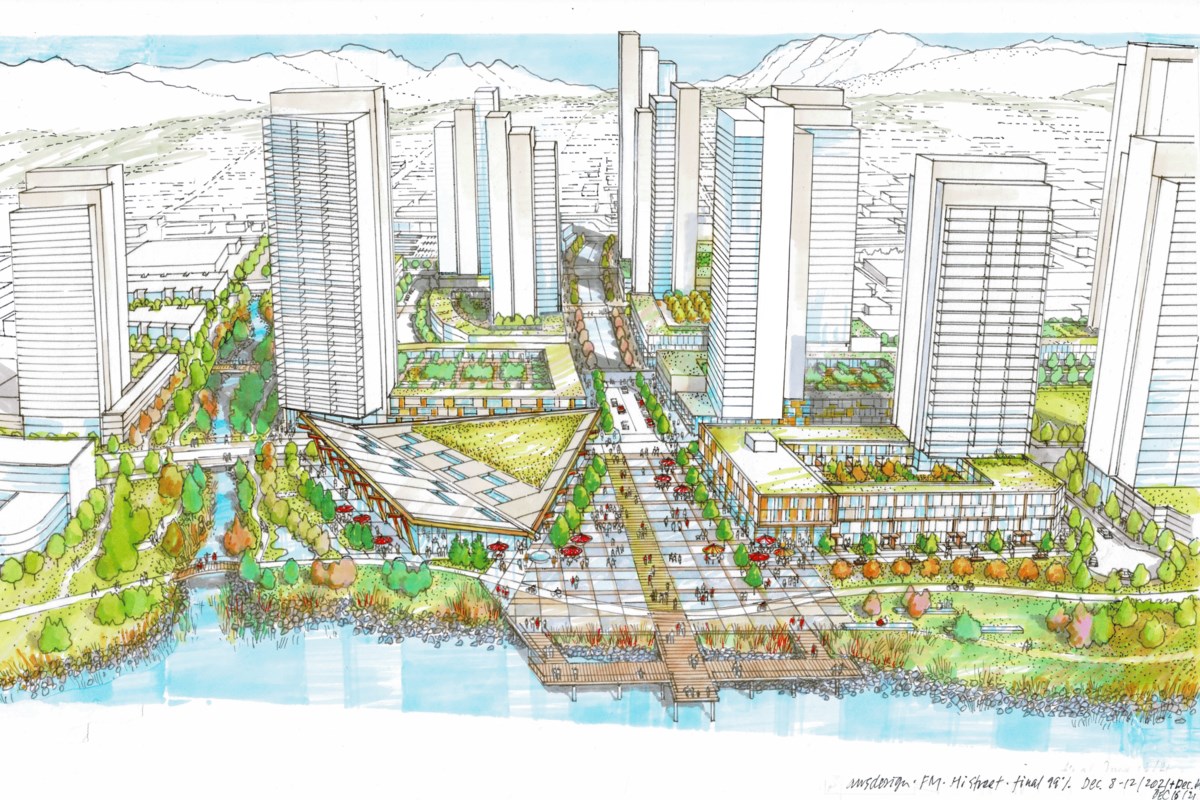 Fourteen years after Ryan Beedie got the go-ahead for a waterfront community in South Coquitlam, the well-known Metro Vancouver developer is ready to make his vision for Fraser Mills a reality.

Fourteen years after Ryan Beedie got the go-ahead for a waterfront community in South Coquitlam, the well-known Metro Vancouver developer is ready to make his vision a reality.

On Monday, Beedie and architect Robert Toth spoke to city council in committee via Zoom about Fraser Mills’ long delay and their desire to finally build.

Land use demand for the 91.5-acre plot – on the site of the former Fraser Mills sawmill, once the largest in the British Empire – calls for a Granville Island type development facing the Fraser River which , when completed, would be home to approximately 10,000 residents.

In summary, the Beedie company plans to build:

Additionally, if the revised plans are approved by council, Beedie would also construct a public jetty and refurbish the Kiewet wharf used during the construction of the Port Mann Bridge.

Beedie described the waterfront center as a “once-in-a-generation development opportunity”, which he said his company had made “a significant investment”.

But he acknowledged the long way to go to put the plans in place.

On Monday evening, following an eight-minute conversation, council unanimously gave the first OCP and rezoning readings for Fraser Mills to proceed to the May 30 public hearing.

(Councillor Trish Mandewo did not attend any of the meetings).

Still, the council issued a caveat on Beedie’s bid to meet deadlines: The company will face penalties if it continues to delay development on the property, staff said.

Andrew Merrill, director of development services for Coquitlam, told the News from the three cities the council has already expressed concern about the postponement of the phase-in.

And to ensure that development expectations are met in a timely manner, the city will enter into an agreement with Beedie once council gives the green light to the application.

“Recognizing that no residential development has taken place at Fraser Mills in the 14 years since the original approval of the plan until now, there is a desire to ensure the applicant’s commitment to the project” , Merrill wrote in an email to News.

“If the new neighborhood plan and revised zoning are ultimately approved by council, a Commitment to Build Agreement will be prepared between the city and the applicant.”

He added: “While the details of the agreement are still being worked out, the applicant has agreed to a general approach on a voluntary commitment to proceed with the planning permissions for the residential development in phase 1 in a reasonable time after board approval.”

Toth told the News that Beedie’s 2008 approvals for a neighborhood plan were “rushed” and that the company needed more time to prepare its master plan.

As for its construction commitment agreement with the city, “we have never offered such an arrangement to another municipality before, but we recognize the time it took to get there. [we] felt that this decision would be one more demonstration of our commitment,” he said.

Or, as Beedie promised the council committee on Monday, “We are confident [the penalties] will not happen. We are equipped and ready to go. »

Toth said Beedie had changed his priorities since 2008, including:

Toth said plans for a BCIT campus fell through; however, the current proposal includes an option for School District 43 to purchase two parcels for an elementary school.

Additionally, plans for a district energy system have also come out, although Beedie plans to build to Energy Step Code 3 – a peg higher than the city’s mandate.

Regarding the “significant investment” that Beedie spoke about before the board in committee, Toth said the company had

In addition, some buildings are now — or have been — built on site; a bid for its presentation center, which will be constructed of solid wood, will be presented next month.

“We look forward to working with the City of Coquitlam over the next 20 years,” Beedie said.

The timing of Fraser Mills’ offer comes as Metro Vancouver recently moved its transfer station off Beedie’s property and moved it one block west.

Along with 15 pieces of heritage-inspired public art, valued at over $3.5 million, there will also be interpretive panels along the waterfront to educate the public about Fraser Mills. Building and landscaping designs will also reflect Coquitlam’s past ties to lumber history.

Mayor Richard Stewart said he dug up his speaking notes from 2008 before Beedie made his delegation on Monday, commenting: “So happy to see him moving forward now…. A lot of work has been done to make this a great project.

Still, the mayor asked, “Are these improvements good for Coquitlam?

“It’s way better than expected,” Beedie replied. “Every citizen of Coquitlam is going to be proud.

Don Luymes, Coquitlam’s Chief Planning and Development Officer, added to council, “This is going to be a game changer for our city.