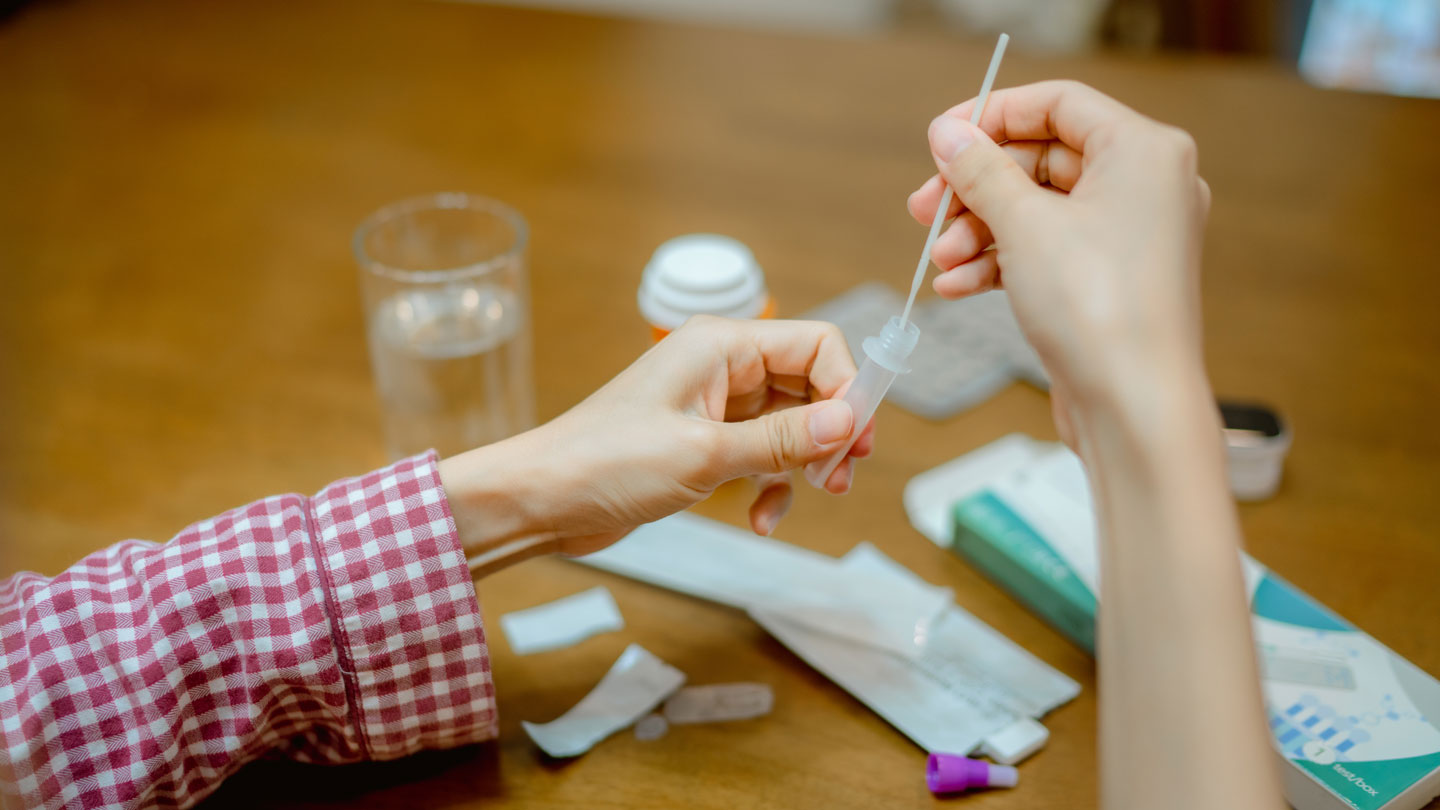 After two years of successfully escaping COVID-19 – including a few brushes with close contacts, a few are-they-just-colds? fears and lots of negative tests – I recently tested positive.

It was both inevitable and shocking. I kind of avoided testing positive during the omicron surge that infected most of my friends this winter, so I figured I was either invincible or I was next. Looking at my rapid home antigen test, I had to recognize that the long, high-stakes tag game was finally over. I was now “it”.

COVID-19 snuck up on me when I least expected it. Cases are low where I live in Queens, NY And in the subway the risk was low thanks to the federal transit mask mandate. (A federal judge overturned the mandate on April 18, though the Biden administration announced on April 20 that it would appeal the ruling and some places, including New York, are keeping masking requirements in place for the time being. .) I had dined indoors, but I still wore my mask in public areas (SN: 03/25/22). So when I woke up with a sore throat on a Wednesday, I thought I needed more sleep. Before testing on Friday evening, I was still convinced that it was just another cold.

I had a pretty good idea of ​​the first steps, which had been drilled into my head until I was sick: isolate myself immediately. Text close contacts from the 48 hours before the first symptoms. Stay away from other people and pets in the house.

It got fuzzier from there. Since I tested myself at home, my COVID-19 test was unofficial. I should surely report my positive test; after all, public health regulations are often based on the number of cases. But it turns out that playing my part was a lot harder than I thought it would be.

When it comes to reporting home tests, “there is no formal recommendation,” says Autumn Gertz, an epidemiologist at Boston Children’s Hospital who works on COVID-19 surveillance. Without a federal home testing reporting program, states are on their own, and it’s confusing where to report, which means many people won’t.

This is problematic: Now that home testing is free and easy to access, home testing is becoming more commonplace. Gertz and his colleagues are tracking home testing trends and say they’ve noticed a gradual increase in their use to detect COVID-19. In the coming weeks, Gertz says they expect 50% of people who get COVID-19 to find out through a home test.

Underreported cases are nothing new. Even at first, asymptomatic and mild cases where the person was never tested would not make the case count. But home testing will make under-reporting even more prevalent. Data from the Institute for Health Metrics and Evaluation shows that only about 7% of all COVID-19 cases in the United States are reported, Katelyn Jetelina, an epidemiologist at the University of Texas at Dallas who writes the bulletin. information Your Local Epidemiologist, reports April 13 in an article titled “Can We Trust Case Numbers?”

To make my case count, I put on two KN95 masks and went to the COVID-19 test booth on my street to get a PCR test that would be officially reported. (An official PCR test result may also be required for insurance coverage in cases requiring medical attention.) The downside is that I was contagious, so there was a risk of exposing others to the virus, even though I was masked for everything but the swab. An alternative, suggests Gertz, is to report your positive home test to a primary care provider. Some home test manufacturers also provide information on how to report home test results.

But until public health reports catch up with the rapid shift to home testing, we’re flying blind. There are, however, ways to find clues about what is going on in your community.

To get started, familiarize yourself with your local public health department’s website, says epidemiologist Michael Mina, scientific director at eMed, a company developing a home test reporting system. Check if your community monitors sewage, which is a better way to track the amount of SARS-CoV-2, the virus that causes COVID-19, in communities than the number of cases or hospitalizations. Outbreaks Near Me, a project Gertz is working on, also collects results from volunteers to help track COVID-19 trends down to the local level.

In general, “be aware and try to keep your eyes peeled for signals,” Mina says. That includes not neglecting trivia: “If you start hearing, like, ‘Hey, you know, I’ve had a group of friends who are positive lately,’ that’s probably a pretty good indicator… that there’s a lot of COVID going on in our community right now and that it’s a good time to start taking extra precautions again.

Speaking of precautions, according to the isolation guidelines published by the US Centers for Disease Control and Prevention, I could have returned to the world without a mask on the 10th day after my symptoms started. But I learned from Mina that you can still be contagious after 10 days. So how do I know if I can still infect others?

Turns out that’s a complicated question. There is no magic number of days when everyone will be uninfectious. And you can still have symptoms and not be contagious, and vice versa. But rapid home tests are an excellent – ​​if imperfect – indicator of current contagiousness. (It’s not like PCR tests, which are extremely sensitive to any virus remaining in your system long after you’ve stopped shedding it.)

A person’s contagion is roughly related to their viral load or the number of virus particles they have in their body. Early research suggested that the viral load of SARS-CoV-2 peaks just before or when symptoms appear, then declines rapidly after symptoms appear. This data informed the CDC’s decision to reduce its recommendation for isolation from 10 days to five days.

But several recent studies suggest that people infected during the recent COVID-19 surge continue to be contagious after five days. A preprint that studied omicron infections in NBA players found that after five days of symptoms, about half of players still had a significant viral load. In another preprint, Mina and University of Chicago researchers found that 43% of rapid tests from 260 vaccinated health care workers still tested positive between five and 10 days after their symptoms appeared. Both studies have not yet been peer reviewed.

See all our coverage of the coronavirus outbreak

“It’s not like a small fraction of people who are still positive and contagious at day five,” says Mina. A possible explanation for these observations is that people who have been vaccinated or who have already been infected have a faster immune response to the virus. The first symptoms are therefore caused by your immune response, and not by a high viral load, which occurs later. “I would strongly, strongly, strongly recommend that people not listen to the five-day pre-discharge isolation recommendation,” Mina says. “It was based on old data.”

Instead, experts say, the best way to tell if you’re contagious after day five is to take a rapid home test, which measures the amount of viral protein in your system in real time. You can even get an idea of ​​how contagious you are by the intensity of the positive line in your test and how fast it is growing. If your positive line appears quickly, chances are you have an extremely high viral load. If it takes most of the allotted test time and the line is weak, there is probably less virus in your body.

But since it takes a lot of virus for the tests to come back positive, “you have to assume you’re contagious” if a line appears, Mina says. Even after testing negative (twice, if possible), still avoid high-risk activities, such as visiting an elderly relative.

By my 12th day, my symptoms were mostly gone except for a persistent cough and a new propensity to nap. But my quick test was still positive, even though the line was much weaker than before.

I wish there was an on-off switch. But, as with most things in this pandemic, it’s a squishy gray area. For all public health recommendations, personal navigation of this virus comes down to individual day-to-day decisions. We hold a lot of power, and often it feels like we don’t have enough knowledge to make such decisions (SN: 06/16/21).

“It’s okay to be confused about all of this,” Mina says. “I think a lot of people are feeling isolated right now and confused by this pandemic.” Even doctors struggle to keep up with nuances and changes, he adds.

As for me, I finally tested negative 14 days after my symptoms started. Given Mina’s advice about testing negative twice, I’ll still be careful, but I feel a little safer now.