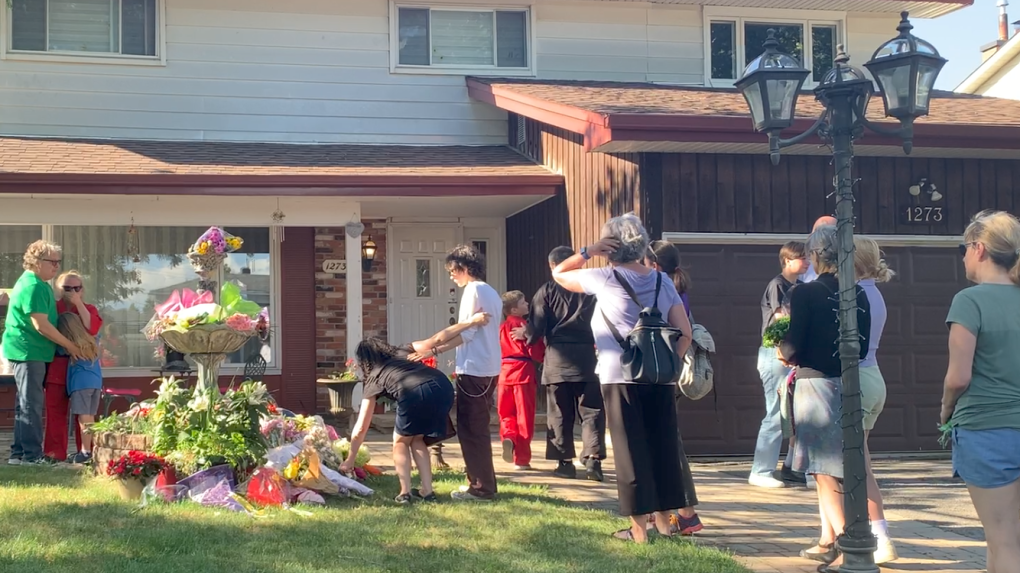 One by one, mourners patiently lined up to lay flowers at Anne-Marie Ready, 50, and Jasmine Ready, 15.

Both mother and daughter died of stab wounds following an incident at an Alta Vista home Monday night. A loss that continues to leave much disbelief and shock.

Among the flowers were two black belts, a tribute from members of the Douvris martial arts dojo where Anne-Marie and Jasmine trained.

“These are beautiful women who were murdered,” said Naomi Eberhard, who trained with the Readys. “And they are an extremely important part of our community. I have never seen them without a smile on their face, they were so full of joy all the time.”

“We had been training together for three years and in the last six months you get to know people really well,” said Michael Penny, who also received his black belt. “We wanted to be here today to show her other family that her karate family is there to support her.”

On Saturday, Alta Vista neighbors staged the memorial from Edgehill Park before marching to the Ready family home on Anoka Street.

“I didn’t know them personally, but I think whenever there’s a tragedy like this, we all feel it. A mother and daughter were lost here,” said Cheshmak Farhoumand-Sims, who helped organize the wake.

Anne-Marie Ready worked as a trade commissioner at Global Affairs Canada. Those who knew her describe Ready as someone who had a good sense of humor and made everyone feel welcome.

“In a word, an amazing human being, someone who cared about others,” said Anand Harrilall, who spoke to CTV News from Guyana. “I can’t really understand that she’s really gone.”

A trait many say she passed on to her daughters Jasmine and Catherine.

“It’s truly impressive how many people they’ve touched and the impact a family can have on all aspects of their lives,” said Jana Marcoux, a friend of Catherine Ready.

A GoFundMe page has been created through the dojo. Several attendees wore purple or green to raise awareness about gender-based violence and mental health.

“Three women’s lives have been changed forever, two of whom are no longer with us and our healthcare system, including our mental health system, is broken and we need to fix this or we will see this again and it’s not acceptable,” Eberhard said.

Catherine Ready, 19, daughter of Anne-Marie Ready, was seriously injured and is still hospitalized. The Special Investigations Unit said police saw a man stabbing a woman when they arrived at the scene and she was hit by police gunfire.

The Special Investigations Unit has not identified the 21-year-old man shot dead by Ottawa police.