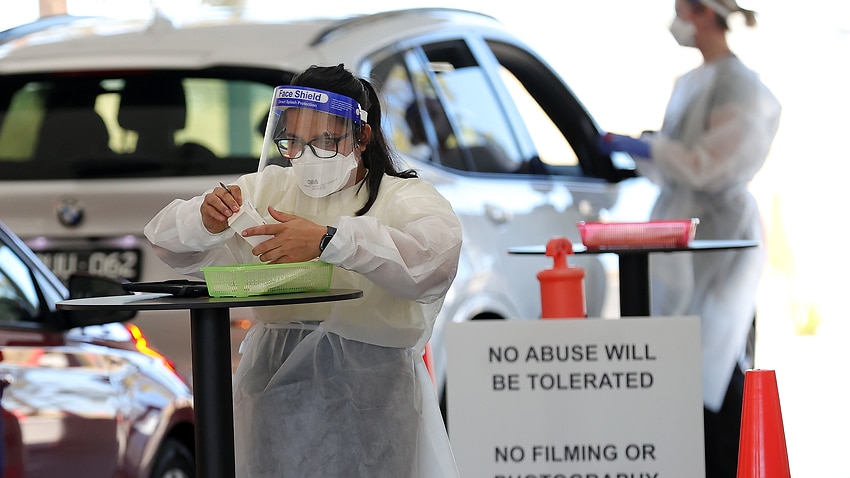 However, Victorian Health Secretary Martin Foley said the latest figures recorded at 9.30am on Saturday show 731 people in hospital and 109 in intensive care.

“And thankfully, in terms of ventilation, yesterday the figure was 24 people on a ventilator,” he told reporters.

“That figure has now fallen to 22 people on a ventilator.”

That’s an increase from the 38,625 cases recorded in the state on Friday.

NSW has consistently recorded the highest daily number of COVID-19 cases of any jurisdiction nationally since the Omicron variant hit Australian shores, but this has now been surpassed by Victoria.

The Victorian government said the large daily result was caused by a backlog of self-reporting rapid tests on a new online reporting platform.

NSW has yet to include positive rapid antigen tests as part of its daily case count.

Foley said he suspects Victoria will see higher numbers of cases than the actual number of infections for a few days as the self-reporting process “smoothes itself out”.

The NSW government amended restrictions on Friday and banned singing or dancing in pubs or clubs until January 27, except for weddings, performers or classes.

Some major high-risk events may also be contacted by health authorities and forced to impose restrictions in order to be considered COVID safe.

Prime Minister Dominic Perrottet also announced that NSW will join Western Australia by requiring frontline teachers, health professionals and people with disabilities to receive a booster shot in order to be considered “fully vaccinated” against COVID-19.

Non-emergency elective surgery will be suspended until mid-February, with the government releasing new models predicting the impact of the Omicron variant on the health system.

The worst of the models released by NSW Health predicts that 6,000 people with COVID-19 could be hospitalized at the peak of the outbreak, expected in the third or last week of January.

About 600 of them are said to be in intensive care.

The more conservative “most realistic” model predicts that at its peak, 4,700 beds will be needed for COVID-19 patients, 273 of which will be in the ICU.

In the best case scenario, only 3158 people will be hospitalized and the number in the ICU will peak at 270.

By comparison, at the height of the Delta outbreak in September, 1,266 people were hospitalized with infections and 244 in intensive care.

What’s happening in other states?

COVID-19 infections have risen to 11,174 in Queensland as the state reported two more deaths on Saturday.

There are 349 people in hospital, 36 more than on Friday and 17 patients in intensive care.

It comes as the Queensland government has announced it will suspend non-emergency elective surgery until March 1, with the state expected to review this measure by the end of January.

There are currently 164 people hospitalized in the state, up from 144 on Friday.

Sixteen people are in intensive care, about 80 percent of whom are unvaccinated, according to South Australian Prime Minister Steven Marshall.

Marshall noted that it will now be mandatory for all health professionals, aged care workers and people in the disability sector to receive a booster shot in order to be considered fully vaccinated.

They will have until January 29 to receive a third dose of a COVID-19 vaccination, the prime minister said at a news conference on Saturday.

“I must warn you in advance that we are very strongly considering making the booster mandatory in other sectors as well, including childcare and education,” added Mr Marshall.

Tasmania posted 2,223 infections on Saturday, a record number of COVID-19 infections for the state.

That’s an increase from 1,489 cases recorded Friday, while the state now has 6,509 active cases.

On Friday, health authorities said one in 30 people in their 20s had contracted the virus.

“We’re going to see a significant increase in business as we move forward, and people need to make sure they’re ready for that,” Prime Minister Peter Gutwein said.

Ten people are in hospital, but only four are being treated for symptoms of COVID-19.

And 1,305 new cases of COVID-19 were reported in the Australian Capital Territory on Saturday.

Twenty-four people are still in hospital and five patients are in the ICU, two more than on Friday.

From noon on Saturday, dancing in nightclubs is prohibited and customers must sit while eating and drinking.

Meanwhile, the Northern Territory has reported 594 cases and no deaths.

There are 17 people in hospital, including one in the ICU.

Western Australia has recorded eight infections of COVID-19 from 4,860 tests, including one local case.

There are now 86 active cases in the state, but zero patients hospitalized.

As rapid antigen testing flies off the shelves, the federal government has introduced measures under the Biosecurity Act to ban the price-gouging of the home testing kits.

The measures, which will take effect from Saturday, January 8 and will remain in effect through February 17, will prevent people who have purchased the tests from reselling them for more than 120 percent of the price at which they were purchased.

Under the new rules, a person will not be allowed to export a RAT kit from Australia unless a valid exemption applies.

Penalties for failing to comply with the new regulations include fines up to $66,000 and five years in prison.