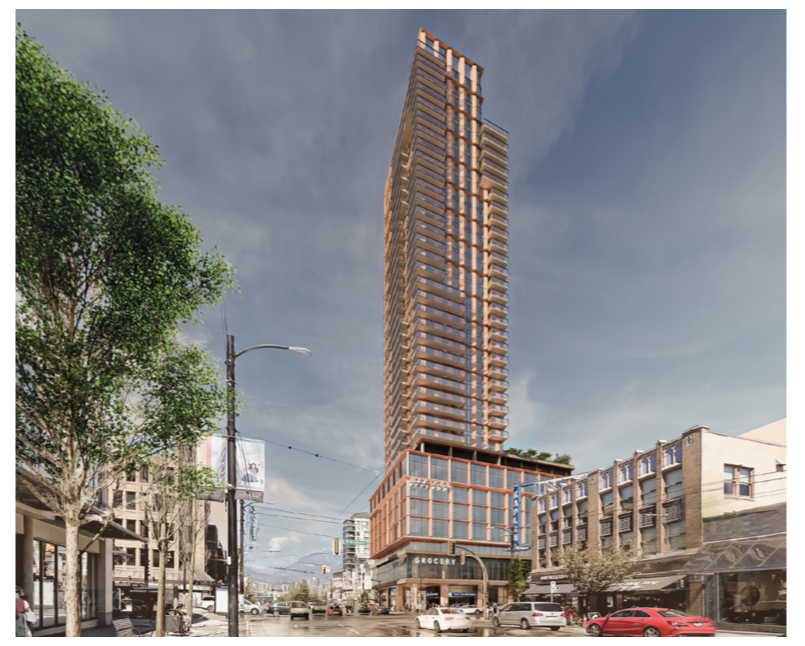 The project will be integrated into the South Granville metro station, which is scheduled to open in 2025

Vancouver City Council voted 9-2 on Tuesday to approve construction of a 39-story rental tower at the northeast corner of Broadway and Granville that will be integrated with a new subway station being built on the property.

When completed, the 407ft tower will be one of the tallest buildings on the south side of False Creek and will feature 223 rental units, 45 of which will be let at below market prices.

A report from city staff described the development as “an urban placemaker.”

“I think it’s actually a nice building,” Coun said. Pete Fry during his remarks in support of the project, the first of its kind to be built above a station serving the new subway line under construction from False Creek Flats to Arbutus Street.

A large grocery store and offices will occupy the lower floors of the tower, which will be built by PCI Developments LP, the same developer with two 14-story rental tower projects underway in the 3600 block of East Hastings Street.

Council’s decision on Tuesday came after hearing from 90 speakers over several nights of public hearings, with supporters and opponents of the project evenly split, according to results tracked by city staff.

Proponents focused on the need for more rental housing, especially on transit lines, and more family homes; at least 35% of all rental units will be two or more bedrooms.

Those who opposed it cited the scale and height of the project, with many noting that the proposal should not be considered until the Broadway plan is presented to council next month.

The council also received 409 letters against and 607 in favor of the tower, including one from British Columbia Attorney General David Eby, who is also the province’s housing minister, and another from the environment minister of British Columbia, George Heyman.

It is rare for ministers to send letters to the town hall on a project.

“The development of mixed-use buildings such as this, which densify the areas surrounding rapid transit stations, is generally accepted as a best practice in urban design, as well as an optimal use of transportation infrastructure in common,” Eby said.

“As a result, the province actively supports proposals like these, which align and support the government’s goals for affordable housing, climate change and transportation infrastructure.

“The cart before the horse”

Com. Colleen Hardwick unsuccessfully tried to postpone debate on the project, suggesting council should first consider the long-awaited Broadway plan, which will outline future development opportunities along the corridor.

Hardwick said the project “jumps” the Broadway plan and said approving it under interim city policy would be “putting the cart before the horse”. Postponing the debate would have restored confidence in the city’s process of engaging with residents, she said.

“Public trust has been seriously eroded by this,” said Hardwick, who is TEAM for a Livable Vancouver mayoral candidate in the Oct. 15 election.

“I fear that we are pushing through some profound change during a pandemic, when we really should be pausing and going through this systematically.”

Com. Jean Swanson cited affordability in her reasons for not supporting the tower, saying it did not serve low-income tenants.

“The towers are not unlivable”

Com. Adriane Carr pushed back against Hardwick’s vote framework that it was putting the cart before the horse, noting it was a council-approved interim rezoning policy that allowed the project to come before council.

“I don’t believe it will set a precedent for the Broadway plan,” Carr said. “City staff just told us today that in fact the Broadway plan is already in draft form. It is therefore not the cart before the horse.

Supporting the project, Carr highlighted the increased number of rental units, proximity to public transit and how the tower will be built to produce 95% fewer emissions than current buildings of its size and shape. .

She challenged some critics concerned about building another tower in Vancouver. She noted that she lives in the West End, where there is a high concentration of towers.

“The livability of the West End is amazing,” Carr said. The towers are separate – there are no tower walls… and in between you get older character houses that are 100 years old, you get three story buildings, you get six story buildings, eight floors, I mean, there’s a real mix.”

Carr added: “Towers are not unlivable. I wouldn’t live in one, it’s not my choice. But the people who live there love them.

Although councilors Pete Fry and Rebecca Bligh voted in favor of the tower, both raised concerns about the need for 300 parking spaces in what is believed to be a development designed for more people to use transport in common instead of vehicles.

Fry: “I still struggle with the six levels of parking for up to 300 cars in what we call transit-oriented development. We must do better. I know this is within the policy, but we need to evolve our policy.

Bligh: “I absolutely agree that parking is a mistake.”

The project will take several years to build, but its completion should coincide with the opening of the Granville Sud metro station at the end of 2025.