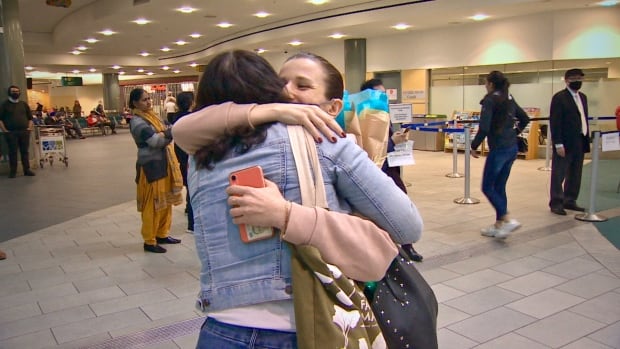 Christina Brock describes her friend Olesia Pytlenko as a “tough guy”. The two women met in Vancouver about six years ago when they were both practicing mixed martial arts.

“She sure is a bit of a daredevil,” Brock said, as she waited impatiently at the arrivals gate at Vancouver International Airport on Wednesday.

The flight landed on time, but it still took Pytlenko two and a half hours to exit the secure area in his beige hoodie and matching sweatpants.

Pytlenko is now one of approximately 14,000 Ukrainian nationals who have arrived in Canada in the two months since Russian forces invaded Ukraine.

Each displaced Ukrainian has had a different experience of the war, in which more than 2,000 civilians have been killed in the fighting and more than 2,800 injured, according to the United Nations.

The journey was also different for each person who fled Ukraine. For Pytlenko, it started in his hometown of Khorol, halfway between Kyiv and Kharkiv.

She had returned there from Vancouver three or four years ago, when she had failed to obtain a work visa. Pytlenko was living with his parents when the Russian invasion began in late February.

Although Khorol was not bombed, nearby sites were, and the family soon decided to head west to Lviv, which was then safer.

“It’s getting worse and worse”

The day the Russian forces invaded, Brock began to worry about her friend. She started sending him daily messages to check in and offer any help she could.

“We’re just surrounded and right now we’re in the middle, in the middle of the war this way. I don’t know what to say, we’re just preparing for the worst,” Pytlenko said in a recording. .

“It’s getting worse and worse,” she said in another. “We’re really scared right now that they’ll start bombing us.”

Any unusual discrepancy between the messages would leave Brock distressed.

“I was constantly worried about her. If something had happened to her, I would have been devastated. I honestly can’t imagine the trauma she went through,” Brock said.

As the threat in Lviv mounted, Pytlenko decided to head to Poland, where she stayed with her brother. It was in Poland that she applied, once again, for a Canadian work visa.

According to Brock, Pytlenko was at least 1,100th in line for the visa and had to wait outside the Canadian Embassy in Poland. But her patience paid off and she was soon allowed to come to Canada.

The only problem, aside from struggling with the idea of ​​leaving friends and family in Ukraine, was that she had no money for a flight.

Fortunately, Brock was able to help.

“I did a fundraiser and people donated and helped [raise funds] for the flight here, which was about $1,500. I had a little more left than I’m going to give him to get by,” she said, adding that she was working on getting a job for Pytlenko to start right away.

Several people were expecting Ukrainians on the same flight from Amsterdam to Vancouver. Among them were a man with a young son, waiting for his 75-year-old father; a woman who is waiting for the friend of a colleague she has never met, but who has agreed to help her; and a man who was expecting a sister-in-law whom he planned to drive across the US border to Washington.

According to the Canada Border Services Agency, 11,198 Ukrainian nationals have arrived in Canada by air since the week the invasion began. Another 2,971 arrived by land.

According to Immigration, Refugees and Citizenship Canada, more than 140,000 people have applied for temporary resident visas under the new Canada-Ukraine Emergency Travel Authorization program, and more than 46,000 applications have been approved.

“I can’t believe I made it to Canada. For me it’s still like a dream or something. I still think tomorrow I’ll wake up and be in Ukraine,” Pytlenko said. . .

Her 55-year-old father is not allowed to leave the country and her mother will not leave without him. Pytlenko’s brother in Poland plans to return to Ukraine to fight.

Pytlenko says she will work in Canada for a bit and try to send some money home to help, but may return soon.

“I’m just worried about my friends and my family. I don’t know. I have to try to see what will happen, but all my thoughts and feelings right now are with my parents and loved ones.”