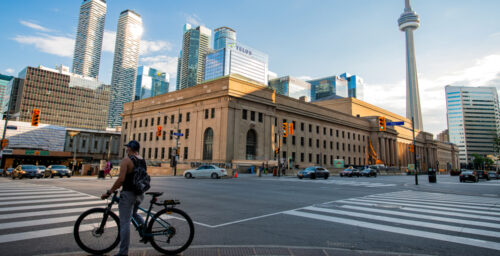 Toronto was named the 16th best major cycling city across the continent in PeopleForBikes’ annual rankings.

The ranking uses a “data-driven program” to assess, identify and compare the best cycling cities in North America. More than 1,000 cities were rated in Canada and the United States, the largest collection of cities in the publication’s history.

PeopleForBikes says the main aim is to focus on youth engagement and highlight the most important bike networks for people looking for the best places to ride across the continent.

PeopleForBikes is delighted to publish our annual report #CityRatings, a data-driven program to assess, identify and compare the best cities for 🚲. More than 1,000 cities were assessed across the United States and Canada, the largest collection of cities in the program’s history. https://t.co/rn6zPl8mr7 pic.twitter.com/14d5ibUtvP

The publication says it is working with “federal, state and local officials to make bicycling better for everyone.”

According to the “Network Score,” Toronto gets high points for its access to retail—especially major malls—by bike. There is room for improvement in terms of accessibility to essential services (hospitals and grocery stores), opportunities (jobs and schools) and recreation (parks and trails).

An interactive map courtesy of PeopleForBikes shows high and low stress areas for cycling in Toronto, which can be found here.

The coveted number one ranking goes to Montreal. Quebec City took first place in PeopleForBike’s major city rankings out of 85 North American cities. It is considered eighth overall out of the 1,105 ranked cities.

Montréal has been named the best major cycling city in North America in the annual ranking of @peopleforbikes.

A city that makes room for cycling is a city where life is good! 🎉 https://t.co/4vhzF3cbW0

With files from Ty Jadah and Megan Devlin