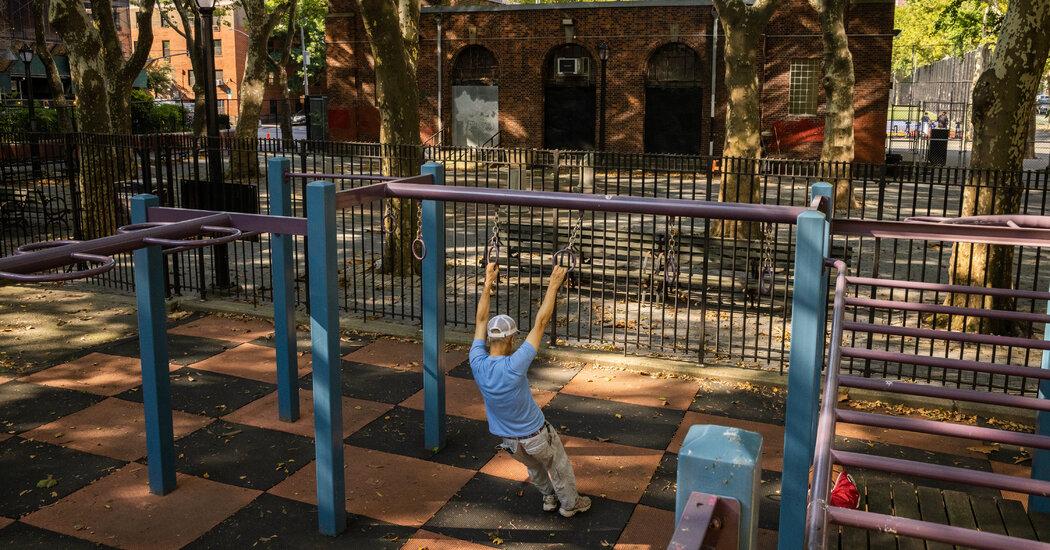 There was always something to do in the red-brick park house with its large, inviting archways.

Children huddled around chessboards and checkerboards as playgrounds and basketball courts were hosed down. They played table tennis, learned to carve at a woodworking shop, and watched movies with their friends.

That was over 40 years ago.

“The kids really had nowhere to play,” said Bob Humber, 86, who worked with young people in the 1970s. They loved this place.

But that was before city park officials quietly converted the brick building — which had thrived as a Lower East Side community center as part of Sara D. Roosevelt Park — into storage space for equipment and supplies. It is not known exactly when this happened.

These days it looks like a fortress with partially closed windows in a sketchy section of the park where people sell and use K2 and other illegal drugs. Behind the building, an outdoor area with benches and power showers for cooling off on summer days remains empty after being temporarily fenced off to deter illicit activity.

The loss of the park house illustrates the challenges of a long struggle by residents and community groups to save a narrow strip of urban parkland that straddles Manhattan’s Lower East Side and Chinatown neighborhoods. Built by city officials in 1934 as part of an urban renewal project to relieve families living in squalid tenements, the park has become a watershed for the city’s crime and drug problems and the homeless crisis.

“This building is dead space right now because there’s nothing but toilet paper and paint,” said Melissa Aase, chief executive of University Settlement, a nonprofit organization that runs education programs. education and social services. “In a city that is becoming increasingly dense, all possible welcoming spaces are needed to enrich the community.”

Reopening the park house would create “an anchor of security” at a time when many residents are concerned about crime by introducing programs and attracting more visitors, said K Webster, president of the Sara D. Roosevelt Park Coalition. “The only way we know to make a park safe again is to actively use it,” she said.

It’s a strategy that worked for another Manhattan park. A comprehensive slate of activities — including movie nights, concerts, dancing and ice skating — has helped transform Bryant Park from a deserted, crime-ridden plot in the 1990s into one of the major green spaces in the city, said Dan Biederman, president of the nonprofit Bryant Park Corporation.

But city park officials have been unwilling to hand over the park house – which sits off Stanton Street – until they can find another storage location.

“The Stanton Street building is a key distribution center for supplies and tools serving Manhattan parks daily,” said Megan Moriarty, spokeswoman for the city’s Parks and Recreation Department. “We are actively working to identify a viable alternative location for this distribution center; any future public use will be determined at a later date.

The fight for the park home comes as the pandemic has laid bare the inequalities of city life. Many poor New Yorkers have limited access to the city’s sprawling network of more than 1,700 parks, playgrounds and recreation facilities, which has become more important than ever for physical and mental health.

A campaign led by New Yorkers for Parks, an advocacy group, called for increasing funding for parks to 1% of the city budget, or about $1 billion. It rose to $624 million in this year’s budget, with a spokesman for Mayor Eric Adams calling it “a down payment” on the 1% target.

The decline of Sara D. Roosevelt Park is an example of “decades in the making of what happens to a park when you don’t provide the resources to operate and maintain it,” said Adam Ganser, executive director by New Yorkers for Parks.

It serves a popular neighborhood wedged between new high-rent neighborhoods and high-end development projects. The median household income around the park was $69,202 a year, compared to $89,812 for Manhattan, according to a census analysis by Social Explorer, a research firm.

As parts of the park became desolate and desolate, many families and seniors stayed away. Frances Brown, 40, pushed her son’s stroller past shooting drug addicts. They went to a playground near the Stanton home several times last year until they found human feces there. “Never again,” she said.

Fences to close off problem areas took away more space in the park. “It seems totally counterproductive because the park is for people — and it defeats that purpose,” said Tom Wolf, an art history professor whose loft overlooks the park.

Fears over the safety of the park erupted last year after a bike delivery man was fatally stabbed there. Concerns about anti-Asian violence in the area also grew after a woman was stabbed to death in her flat across from the park in February by a homeless man.

There have been 51 major crimes — including one murder, nine felony assaults and 12 robberies — reported at Sara D. Roosevelt Park since 2019, according to an analysis of police data by nonprofit OpenTheBooks.com. Last year alone, the park had 17 felonies, ranking 11th among city parks.

One organization, Audubon New York, last year suspended a plan to plant a garden in the park after a program manager raised concerns about the safety of its staff and volunteers.

The problems spread to the surrounding blocks. People vandalized buildings and aggressively threatened store employees and customers. A wine bar has found drugs, needles and knives hidden in its planters.

An acupuncture clinic across from the park ended up moving to the Union Square neighborhood for security reasons. “It’s just no man’s land in many ways,” said Nini Mai, 40, its founder.

By the 1980s, however, Sara D. Roosevelt Park had become overrun with drugs, crime, and prostitution. Local residents banded together to pick up trash and drug needles from playgrounds. They transformed a weed-strewn lawn into a lush garden.

It worked, for a while. Then the park started to slide again. Many residents and business owners are frustrated that they are not getting more help from the parks department. “It’s neglected,” said Alysha Lewis, former president of the local community council. “The parks department really treats him like he’s a son-in-law.”

Sandra Dupal, who owns a bakery, in 2017 offered to pay for a kiosk to sell sandwiches and snacks so more people could enjoy the park. She never received a response from park officials. “The park has untapped potential,” she said.

City park officials said they have made $11.4 million in park improvements since 2005 and are planning $21 million more in projects, including rebuilding a playground. They worked with other city agencies to bring homeless outreach teams and medical vans to the area. They said they would also look at concession opportunities.

“We are committed to improving and caring for the park’s many features and facilities for New Yorkers of all ages to enjoy,” Ms. Moriarty said.

Only three of the original park houses are still standing. They have public toilets, accessible from the outside. The other two houses are used for park operations, including a communications center and a substation for park enforcement patrol. All of the buildings should be turned over to the community, advocates say, but they asked Stanton first in part because that section is in disrepair.

Adrian Benepe, a former city parks commissioner, said park officials had limited options for finding other storage space in Manhattan, which is running out of space. “I don’t believe it’s a question of willpower or money,” he said. “It’s a matter of logistics.

But Ms Webster and other advocates say it’s a matter of fairness and the Stanton House should not be used to support other Manhattan parks, including larger parks with far more resources.

In recent years, a popular campaign has generated many ideas for the park house. Community Center. Bike repair station. Swimming pool. Pratt Institute students worked on designs that reimagined what it might look like.

Reynaldo Belen, 20, a recent graduate from a high school across from the park, said it should be used to bring people together. “That could sort of stop some of the violence in the region,” he said. “You don’t shoot someone you know or see all the time.”

Around the time park officials began ferrying supplies into the park house, Mr Humber, the former youth worker, said he was told it was only temporary. Since then, he has demanded that the house in the park be returned to the community.

“I’ve been fighting for this building for so long,” he said. “I hope I’m still alive when they open it.”