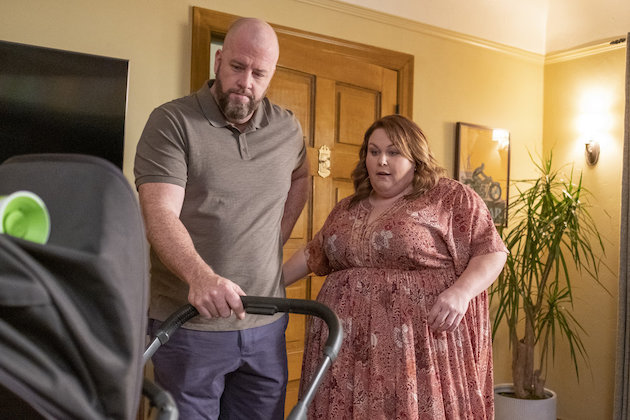 There’s a whole lot of ugly in the lead-up to Kate and Toby’s decision to end their marriage, and Tuesday’s This Is Us shows it all.

The hour skips around in the couple’s timeline, giving us glimpses of how, exactly, the union of Kate Pearson and Toby Damon comes to its bitter end. And it is bitter. But the episode also offers flashes of what the future of ‘KaToby’ looks like, and most of that is pretty happy and backs up the idea that these two just weren’t meant to be together forever. More: We get to see two of the show’s previously established flash-forwards intersect!

Read on for the highlights of the show’s 100th episode, “KaToby.” (And then make sure to join us on a deep dive into those flash-forwards here.)

BRIDAL SUITE, REVISITED | We open in the flash-forward to Kate’s wedding, just as Madison and Beth are kicking Kevin out of the bridal suite. After he leaves, Beth notes that her sister-in-law is being incredibly zen about her big day… and then Toby calls. He’s sitting at home, and he congratulates her on her imminent nuptials, then says, “Kate, you know what you said to me the day we signed our divorce papers? I want you to know that I see it now. I’m sorry it took me so long. If only I had a crystal ball, I could’ve seen the way this ended up.” She says something about life being clearer if we lived it backwards… and then we begin our journey through Kate and Toby’s End Days.

A VALIANT EFFORT | In the present day, it’s the morning after little Jack took his unauthorized trip to the park. Toby announces that he’s going to take the Los Angeles job he’d turned down: “It’s going to be a huge step backward in my career, but I’m willing to do whatever it takes to save our family.” Which is great and all, but the sullen tone with which he delivers this news makes me write in my notes “UGH.” And when Kate suggests couples’ therapy, as well, he says he’ll do whatever it takes.

So they do. And everything starts well. But then Kate finds joy in her new position at the school, where Toby’s new gig only brings him simmering resentment. And when Kate is late for therapy, it sets him off. They argue. “It’s like we are trapped in a hellish version of Groundhog Day,” Kate tells their counsel. And Toby, who is tired of all of it, leaves before the session has really begun.

HAPPIER TIMES | The episode skips back and forth in time, so the recap will, too. We jump to Kate and Philip’s engagement party. Madison is there with Eli, and she’s pregnant! Kevin’s date is an actress from a State Farm commercial, and Kate pulls her twin aside to whisper that his latest lady — who seems to be the most recent in a long line of forgettable girlfriends — won’t be in the family photo at the wedding … and he agrees. (Ha!) Sophie is there with her husband; apparently, she and Kate have gotten closer again. Kevin is taken back to see his ex-wife there, but he promises Kate that he’s OK with it.

Randall and Beth are also in attendance, and Kate jokes with her brother about his senatorial campaign. Rebecca and Miguel pass by Kate and Philip’s table and there’s a discernible change in Rebecca; she’s leaning heavily on her husband, and she’s very subdued. When she congratulates the happy couple, she momentarily forgets Philip’s name.

But the sad moment passes, and Kate goes up on stage and mentions that “a few years ago, on an unnaturally hot day in Koreatown, this song changed everything for us.” Then she calls her future groom up to join her, and they perform Chumbawumba’s “Tubthumping.” Yup. Everyone sings along.

QUITTING TIME | The mood is decidedly less celebratory a few years before, at a family party for Hailey, Nicky and Franny’s second birthday. Kevin’s date is a woman from a commercial for Trojan condoms, which seems to be her only personality trait. Both Toby and Kate are there but not really there, and after Toby makes a mean crack about Kate’s job, she retreats to the bedroom to cry.

Kevin finds her there. “How do I know when it’s time to end the marriage?” she wonders. He says she’ll know, and that she and the kids will be fine in the long run. And in the next scene, that bears out: In a jump to when little Jack is 5 or 6 (?), Philip asks Kate to marry him during family dinner. The kids are in on it: After he gets down on one knee, they hold signs that read “Say yes!” and “Seriously Mom, say yes!” She does, and Kate and Philip kiss.

I GET KNOCKED DOWN | But forget about that for a moment, because we hop backward to the point where Toby and Kate have been in therapy together for 16 months. The therapist suggests that they have dinner together, just the two of them. So they do, but it quickly devolves into the usual arguments. At one point, Toby yells, “ENOUGH! I AM A GOOD DAD!” and accuses Kate of sucking the joy out of fatherhood. She points out that he always looks miserable when he’s with the kids, which prompts him to spit back, “I look miserable because you are in the room.” WOW.

No wait — it gets nastier. As his volume rises, Toby asserts that therapy is a joke and “it turns out the only crime I can find myself guilty of is not being Jack Pearson… I’m sorry that Jack Pearson died and you ended up having to marry me instead of him.” They probably would go on like this forever, except they hear Jack in the bathroom: He’s dunked his Boba Fett toy in the toilet in an effort to make them stop fighting and recover the toy.

Later, Toby is gutted, remembering when he was a boy hearing his parents argue. “It’s over, Toby,” Kate says sadly. “It’s time.”

GOAL I GET UP AGAIN | The next bit zigzags a little, so stay with me. A post-divorce Toby and Philip meet at a sports bar, where Philip says he plans to propose soon, and Toby recognizes that Philip is going to become an even bigger part of Jack and Hailey’s lives than he already is. The meeting starts out gruffly, but gets a little less awkward after Philip promises that he loves the kids and considers it an honor to help raise them. 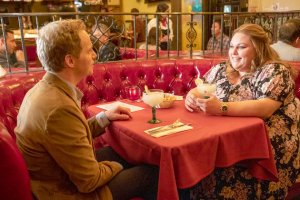 Then we’re at Kate and Philip’s first real date, at a Mexican restaurant. She puts her hand on his in joking comfort as a mariachi band approaches their table; too much “personal attention” isn’t his thing, he tells her. But they’re both deeply affected by the touching of their hands, and she excuses herself to go process her feelings alone. When Philip finds her, she says that her marriage to Toby died because they swallowed their feelings and weren’t honest with each other, something she’s never going to do again. “So I’m going to ask you directly: What are you doing with me?” she wonders, adding that he’s a “serial womanizer who dates a string of toothpick-sized women.”

He gently says hers isn’t the only life that’s “messy,” and goes on to tell her about his wife, who was blind. Trouble conceiving a child and three unfruitful IVF rounds “just sucked all the lightness and laughter out of our home.” And when she wanted to try for a fourth, he said no. The division drove them apart, and when she left to live at her mother’s house, she was hit by a drunk driver. “I am trying to be happy again, and you make me happy,” he says tearily. “So that’s what I am doing.” Kate is touched. They kiss.

YOU AIN’T NEVER GONNA KEEP ME DOWN | Then we scoot back to two days before the divorce is finalized, when Toby brings the kids to Kate’s after being at his place, then he makes a plea to try again. “Kate, there’s still time. We don’t have to do this,” he says. He offers to go back to therapy, but Kate’s mind is made up. They’re both doing better now, she points out, and the kids are visibly happier. “I am terrified. I don’t want to be alone. I don’t want to start over,” he says. “This cannot be the way that our story ends.” Then he kisses her… and Kate reiterates that it’s over. “Well, I guess that’s the last time I’ll ever kiss my wife again,” Toby says, and he leaves. After, Philip texts Kate and — knowing she’d be down — asks if she wants to grab a drink in Koreatown, aka the hangout she referenced in her engagement party toast.

The day Toby and Kate sign the divorce papers, she tells him this afterward: “This is not how our story ends. Just because our marriage is over doesn’t mean our story is over.” But he’s not into it. Still, in a montage, we see happy moments from their post-divorce lives. Toby buys a house. He stays for dinner one night at Kate’s when Philip is there. And by the time Jack, Franny and Nicky turn 6, everyone is cheery and getting along. (Madison also had her baby by this point.) 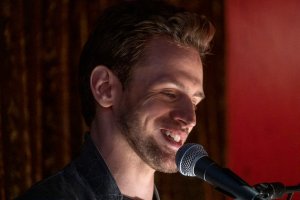 Elsewhere/at another time, Toby meets a woman at a coffee shop and they both love making bad puns. Years later, she’s with him at a bar as they hang out with Philip and Kate; Toby is wearing a wedding ring and rubbing the woman’s arm lovingly, so I’m gonna take a giant leap and say this is the new Mrs. Damon. When (Not Quite Yet a) Rockstar Jack turns up with Lucy, we realize that the foursome is there to hear him perform. Aw, guys!

Now it’s your turn. What did you think of the episode? Sound off in the comments!