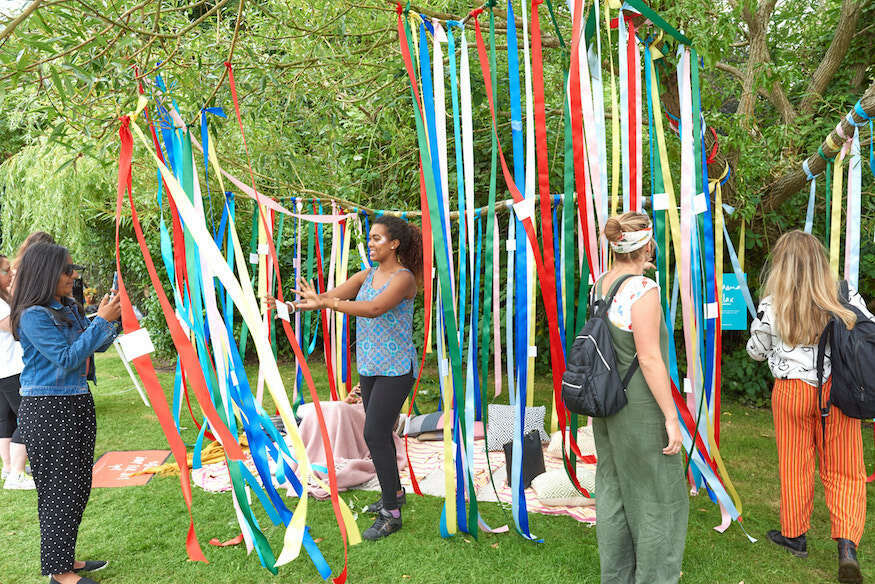 POP-UP SCREENS: Hilly Fields Park in Brockley is the chosen location for Pop Up Screens this weekend. Book tickets to watch Grease on Saturday or The Greatest Showman on Sunday, all outdoors, with an open bar everywhere – or bring your own picnic. August 5-7

GREEN CITY: The London Metropolitan Archives’ Green City traveling exhibition is moving to its second location, Aldgate Square. This is a collection of photographs and prints celebrating London’s green spaces. Don’t miss the show at Hampstead Heath and Epping Forest later this summer. FREE, until August 14

CAMDEN FRINGE: No ticket for the Edinburgh Fringe? No problem – Camden Fringe brings over 200 events to North London throughout this month, across theatre, comedy, dance and music. With many performers feeling out of Edinburgh, this is a great opportunity to see talented performers at reasonable rates. Until August 28

THIS BRIGHT EARTH: Somerset House is hosting a celebration of community and culture, This Bright Land, which opened this week. The open-air courtyard has been transformed into a sort of wonderland, with performances, lectures and workshops – all centered around a temporary 35m-high observation wheel, with a different sound installation in each gondola. Additionally, there is a street food market hosted by Black Eats LDN and different events every weekend.Until August 29

REGGAE IN THE CINEMA: BFI Southbank is hosting a Reggae On Film season, to mark 60 years of Jamaican independence, celebrating reggae music and culture and its relationship to film. One highlight is the re-release of the 1972 Jamaican crime film The Harder They Come, which is often credited with bringing reggae to the world through its soundtrack. Browse the full program. Until August 30

CLIMATE: Immersive art experiences are all the rage, and Austrian painter Gustav Klimt is the latest to get the treatment, at The Boiler House in Shoreditch. It’s the first weekend of an exhibition featuring large-scale floor-to-ceiling digital projections to create animated versions of Klimt’s paintings, with a VR experience as well. Reservation until August 31

SCHOOL VACATION: Running out of ideas for entertaining the kids? Take a look at our guide to spending the summer holidays in London, to keep them smiling until September.

CAT STORIES: Southwark Cathedral celebrates cats with a day of feline-themed lectures by historians, behaviorists and poets. Veterinary surgeon Dr Jo Lewis gives insight into what your cat might be thinking, Celia Haddon – formerly the Daily Telegraph’s dying aunt – discusses stray and wild animals, and broadcaster Oliver Soden is in conversation with the Dean of Southwark. 10.15am-5pm

BEAVERTOWN AT 10 MONTHS: The Beavertown Brewery has been around for a decade and is hosting a party at its bar in Tottenham Hale to celebrate. It’s a day of food, music and beer – your ticket includes all the beer you can drink, plus one menu item and a bag of goodies to take home. 11am-11pm

IN THE HOP: Head to the Hayward Gallery Terrace at the Southbank Center for Belonging (in The Hop), a series of dance performances centered around the current The Hop pavilion. The structure represents the journey hop pickers once made between London and Kent, and today’s dance performances were specially created by choreographer Adesola Akinleye. FREE, 12:30 p.m.-2 p.m.

Flashing buzzers: The Kennington Film Museum hosts the UK Buster Keaton Society for an event dedicated to the silent actor. Watch a selection of short films featuring Keaton, before settling down for a screening of Blinking Buzzards, the 1926 film in which Buster plays Alfred Butler, the son of a wealthy family who finds himself on a hunting vacation. 4 p.m.

HALCYON NIGHTS: Launch of the new cabaret show Halcyon Nights at Brasserie Zédel near Piccadilly Circus. The art deco venue transforms into a Golden Age nightclub, with acrobats, dancers, comedian singers and a live band taking the stage. 1950s Sunset Strip-themed cocktails are available throughout the evening, and dressing up is encouraged — but not required. 7 p.m.

LONDON TRIATHLON: Swim, bike and run through the city as the London Triathlon comes to town. Even if you’re not an athlete (or spectator), be aware of daytime road closures. Road closures in place 5am-6pm

CROYDON AIRPORT: Once a month, Croydon Airport opens to visitors. Book a tour to visit the control tower, once the center of London’s first international airport. It is also an opportunity to see exhibitions relating to the history of the airport, from the First World War to its closure in 1959. 10am-2.40pm

THE DRAG SYNDROME: Drag collective Drag Syndrome have been successful at several London venues and events recently, and now they headline the first Sunday Street Party at This Bright Land at Somerset House. Composed of drag queens and kings with Down syndrome, the group takes over the Courtyard for a celebration of neurodivergent culture. 12pm-10.30pm

VISIT OF THE PALACE: A Victorian Chapel, Tudor Great Hall and Georgian Dining Rooms are all part of Fulham Palace and can all be visited on today’s guided history tour. Learn about the building’s past as the residence of various London bishops and discover gems including a secret door. 2-3:15 p.m.

GHOST SIGNS OF ISLINGTON: Search for ghost or faded billboards in the Islington area on this Footprints of London guided walk. See several surviving examples of hand-painted signs in the streets surrounding Islington Green and learn about the stories behind them. 2 p.m.-4 p.m.

NATIONAL OIL: British reggae samba band Dendê Nation is hosting a workshop, giving the public the chance to play and sing along to popular Afro-Brazilian songs. Learn the techniques of certain instruments while learning more about the culture behind the music. 12 years and over. 3pm-5pm