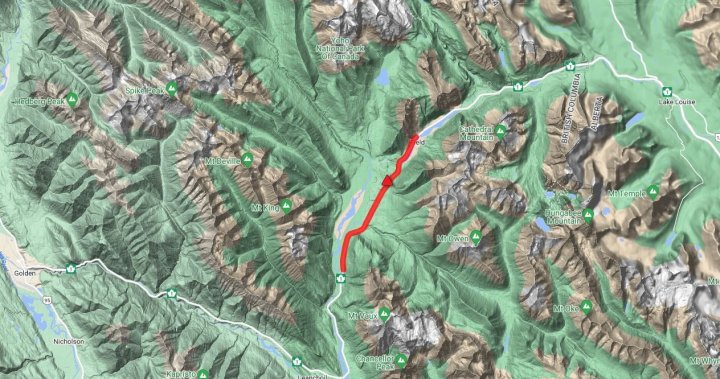 A section of the Trans-Canada Highway in British Columbia near the Alberta border has been reopened following a fatal car crash earlier Saturday.

According to DriveBC, the highway was closed in both directions west of Field, from the western boundary of Yoho National Park to the access road to the Field Visitor Center, a distance of approximately 15 kilometers.

On social media, Golden police said the highway was closed due to a fatal car accident.

✅ OPEN – #BCHwy1– OPEN to traffic in both directions after an earlier vehicle incident 15 km west of #FieldBC.

Expect an additional 20 minutes of travel time when congestion begins to clear.

Thank you for your patience.@ 511 Alberta#ConeZoneBC

#BCHwy1 is currently closed east of #GoldenBC due to a fatal road accident near #FieldBC at 2 o’clock in the afternoon. Detour by #BCHwy95 and #BCHwy93S available. Check @DriveBC or https://t.co/WaGoqLmtw6 for updates.

Just before 5 p.m., DriveBC reported that the Trans-Canada Highway had reopened to alternating single-lane traffic.

Then, at 5:40 p.m., DriveBC said the freeway was fully reopened to traffic, although motorists were warned of possible delays.

At the time of the incident, DriveBC said all lanes were blocked and emergency vehicles were on the scene.

“Why does it take so long to open the road?”

“Aren’t you just taking pictures and moving the vehicles to the side? »

Good questions but, unfortunately, it’s not that simple when it comes to crashes and shutdowns.

For the latest road conditions across the province, visit DriveBC.