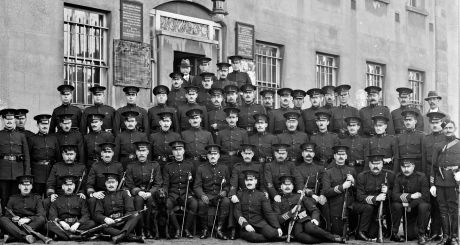 A commemoration service to mark the centenary of the dissolution of the Royal Irish Constabulary (RIC) will take place in London on Friday.

The trust remembers all police officers who have died in the line of duty in the UK, some 5,000 officers in total, of whom more than 1,000 died in Ireland.

The event is taking place Friday morning at a British Army barracks in London, but the trust has asked that the name of the venue not be revealed in advance for security reasons.

The memorial service was preceded by an event at the US Embassy in London on Thursday evening hosted by the trust to which relatives of those who served in the RIC were invited.

Police Trust vice-chairman John Giblin, who is involved in organizing both events, said he has a long-standing relationship with the US Embassy in organizing events.

He pointed out that while relatives of RIC police officers were invited, the US Embassy event was about the general work being done by the trust.

Mr Giblin said the trust would not be true to its royal charter if it did not commemorate the 638 RIC men who died in the line of duty. This figure includes Black and Tans and Auxiliaries who died during the Revolutionary War and served in a support role with the RIC.

He stressed that Friday’s event was not political in nature. When asked if Irish or British government officials were invited, he replied: “We would be failing in our duty not to inform the relevant authorities.”

When asked if he had received an invitation and how he had responded, the Foreign Office did not respond to The Irish Times at press time.

Mr Giblin said there had been “huge interest from the Republic of Ireland” in the event and that many others who were unable to attend sent their apologies.

“It’s still hard for many of them to remember, commemorate and put to bed after 100 years the pain and grief they went through,” he said.

“We were very aware that it was not about politics. People have to leave their politics at the door. These are basically those who have died at some point after vouching for their work to the best of their abilities, without fear or favor. The focus here is on the Royal Irish Constabulary doing their duty on the island of Ireland.

“They were Roman Catholic boys who just wanted to improve. The problem is that they got caught up in the story. You would be hard-pressed to find a family in Ireland who has no connection to the RIC.

Mr Giblin said it was originally planned to hold the event in the crypt of St Paul’s Cathedral in London, but the venue turned out to be too small. He said moving it to an army barracks was appropriate as more than 150 RIC men died in action during the First World War.

In January 2020, an attempt by then-Justice Secretary Charlie Flanagan to hold a memorial service in Dublin for the RIC was aborted following objections from those who thought he was honoring those who s were fighting against Irish freedom.

Police historian and former guard Jim Herlihy said the backlash against this proposed commemoration made it impossible to hold an event in Ireland marking the disbandment of the RIC without it becoming a security issue.

“What happened to me happened to everyone else. There were death threats. There’s all this kind of reporting,” he said.

Mr Herlihy said relatives he had spoken to were “thrilled and honoured” to have been invited to attend in London, and to get 300 attendees “is absolutely incredible”.

Among those heading to the event is Dublin-based musician Dave Hardy. He discovered in recent years that his great-great-grandfather, Harry Hardy, had been the first conductor of the RIC which he had founded in 1861.

He only discovered the family connection 15 years ago and he took part in a concert in 2011 to mark 150 years of police music in Ireland through the RIC and then the group Garda.

“We all have these connections that make sense now given our family connection to music. Our family is very specific – we’re into military music. We discovered that the connection with music goes back a generation to his father.