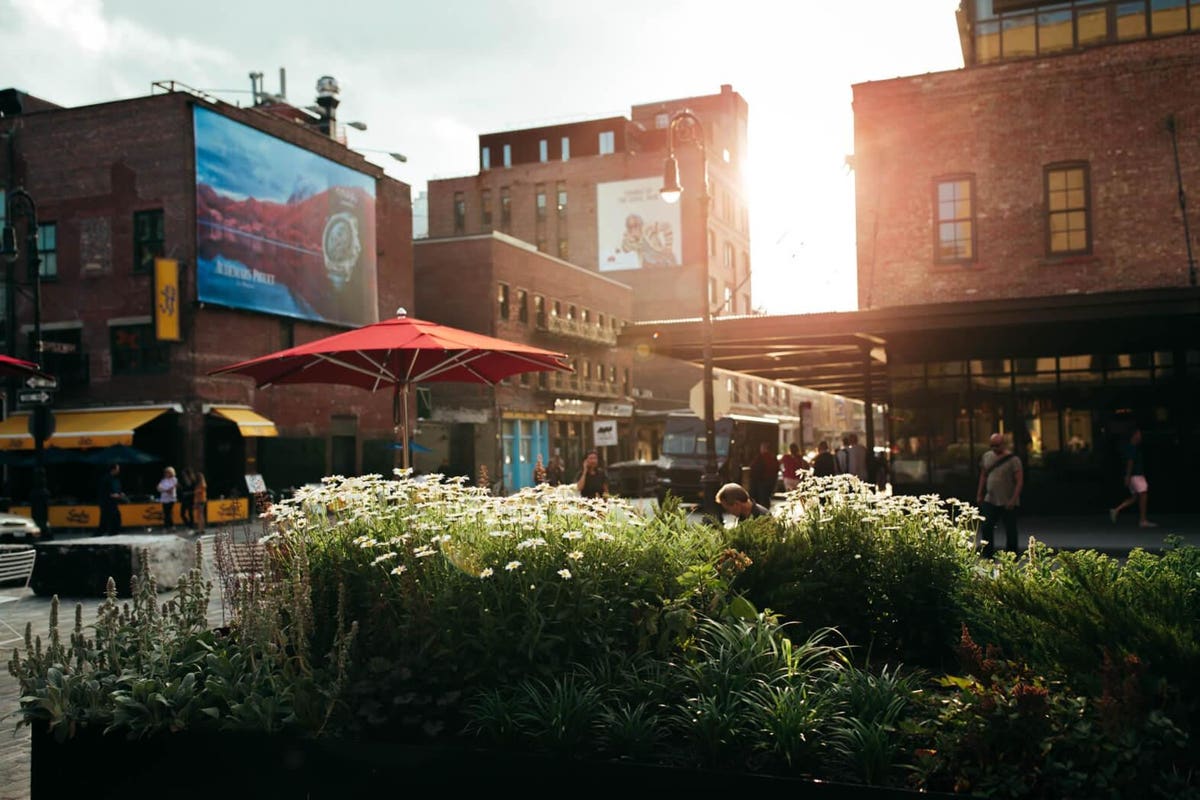 New York City’s Meatpacking District, which earned its name from the slaughterhouses and packing plants that dotted the area in the early 1900s, was primarily a residential neighborhood until farm markets moved in during the 1840s.

Today, this district is known for being an up-and-coming retail hub on Manhattan’s west side, housing a diverse mix of luxury brands like Hermès and Dior, direct-to-consumer brand storefronts like Warby Parker, tech companies like Google
and Tesla
as well as many restaurants and newly-renovated hotels, like The Gansevoort.

But when the COVID-19 pandemic hit, what was once a vibrant neighborhood grew quiet. Many retail storefronts had to close up shop. As a result, the Meatpacking Businesses Improvement District (BID) knew it had to act quickly to revitalize the neighborhood.

One outcome of these efforts was a mural project: Shuttered storefronts drained the lively energy that previously pervaded the area, so the BID commissioned Theresa Rivera, a production designer, to paint murals on the storefronts of businesses that were forced to close their doors.

Over time, the continued efforts to promote the district’s recovery gained momentum. Other programs, including installments during the holiday season and festivals and fairs such as Digital Art Month in Meatpacking, helped draw foot traffic back to the area.

These efforts seem to be paying off: Since September 2020, the Meatpacking District has seen 27 new businesses open up shop, including restaurants like La Pecora Bianca and BB’s as well as retailers like Herman Miller, two: minds, Bally, and Frame.

“We are so lucky to have such prestigious neighbors in one of the busiest neighborhoods in New York,” said Jesse Dong, co-founder of apparel brand two: minds. “Omicron slowed things down, but since February, we’ve seen a major increase in both foot traffic and business.”

Pedestrian traffic is now returning, with a notable uptick at the end of March 2022. The district is now seeing an average of over 250,000 people per week, including workers, residents, and other visitors. This is significant when compared to March of 2021, when the district saw averaged only about 80,000 visitors per week.

The retail revival trend continues with 12 new businesses opening in the Meatpacking District over the last six months and more expected to open soon—including a new Breitling store, a Swiss luxury watchmaker, which just signed on for 3,800 square feet of retail space there.

Competitive rental rates in the district have been a draw for attracting retailers. Reports show that on average, Class A space in the Meatpacking District costs $98 per square foot compared to $121 per square foot in nearby SoHo.

Currently, the Meatpacking District is home to 77 retail stores, including 43 apparel stores. In total, there are 175 ground-floor businesses within the neighborhood, as well as a variety of retailers and food services located within Chelsea Market.

Future-facing retail growth here looks promising as well. “We’re tracking an additional four to six businesses that plan to open in the next two months, and another five to six which will be slotted to open by the end of 2022,” said the Meatpacking BID’s Director of Marketing, Tiffany R. Griffin.