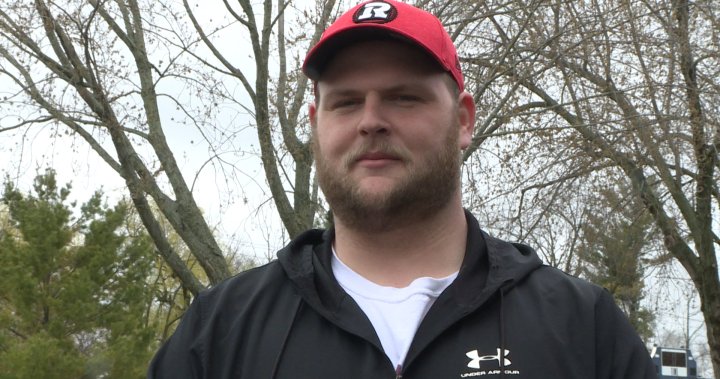 A lot of hard work paid off for Gananoque’s Zack Pelehos, as on Tuesday night he was selected in the CFL Draft, second overall, by the Ottawa Redblacks.

He is 6-foot-6, 300 pounds, and at the Canadian Football League Combine, he was the fastest offensive linesman for 40 yards.

“It didn’t settle right away,” says Pelehos. “This morning when I woke up I pinched my skin a bit just to make sure it was a real situation, that I was indeed second overall.”

And everyone at Gananoque High School beamed with pride after the former GSS Trojan was captured.

“It’s very, very exciting to know that one of our own has reached such a peak and something that they’ve always dreamed of,” said GSS Athletic Director Jane Clark. “And I think that shows you that perseverance and determination, no matter where you come from, can definitely pay dividends.”

“He always thought and realized that the talent was there, especially when we saw him translating when he went to the University of Ottawa,” says Sean. “I would say at first you saw that size, but then you saw that talent. So I think they get a good one for sure.

The huge lineman cut his teeth in football at GSS and Kingston with the Junior Grenadiers.

“When I’m not on the football pitch, I’m a very nice guy,” says Pelehos. “I am a sociable person, I will please everyone eventually. When I’m on this court though, I’m an aggressive guy and I’m going to bring the pain as much as possible. So you don’t want to line up in front of me, I’ll say that.

And not only will it bring pain, but it will also bring fans to the nation’s capital.

The Ottawa Redblacks will definitely sell more tickets from the Gananoque community,” said Trojan football coach Chad Haffie. “I just bought season tickets myself this morning. There will be a lot of local support for him.

“There was time where he played TMFL, Grenadiers, Ottawa Gee-Gee, and it’s not going anywhere now that he’s playing pro, that’s for sure.”