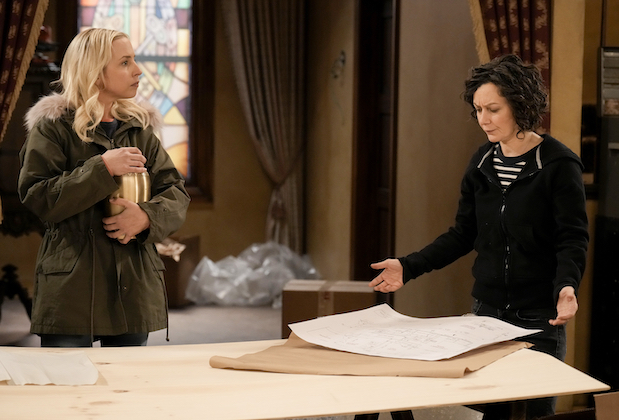 Warning: The following contains spoilers from the May 4 episode of The Conners.

Looks like The Conners is heading for another marriage.

During Wednesday’s episode, Darlene and Ben buried the hatchet and got engaged! So how did the on-again, off-again couple go from never getting back together to being happily ever after?

Prior to the impromptu proposal, Darlene kept biting Ben’s head off whenever he offered an idea for his new home to be built. Among his suggestions was that the master bathroom have two sinks – you know, for resale value. But as Ben soon confessed to Becky, he imagined this second sink for someone who loves Darlene and wants to live with her – “someone who has a railroad spike in their head and can’t feel anymore. of dignity,” he said impassively.

When Becky told Darlene that Ben was still interested, Darlene shot her. She had finally made it to a place where she lived well with only one sink, and she wanted to leave well enough on her own.

All that changed, of course, when a spat between exes culminated when the roof collapsed under Darlene’s feet. Ben rushed downstairs to make sure she was okay, then kissed her. “I’m so glad you’re not dead,” he said.

Later in the emergency room, Ben presented Darlene with a teddy bear from the gift shop. After learning it was $50, Darlene insisted he give it back – but first he ripped off the tag and converted it into a makeshift engagement ring. He brought down one knee and slid it over his finger.

“When you fell through the roof, I thought I lost you,” he said. “And then this whole thing about who did what to whom in the relationship became…meaningless.”

But before Darlene would say yes to Ben’s proposal, she needed to be assured that he wouldn’t blame her for her past indiscretions. “All is forgiven,” he told her. “I just want us to spend the rest of our lives together.”

Elsewhere in the episode, Christopher Lloyd resumed his (brief) Roseane role of Bev’s old flame (and Mark’s new contrabassoon tutor) Lou. Sadly, Estelle Parsons, last seen via FaceTime in Season 3, did not join him. Mark phoned his great-grandmother, but the 94-year-old did not appear on the other end.

What did you think of The Conners Season 4, Episode 18: “Best Plans, a Contrabassoon and a Sinking Sense”? Leave a comment with your full review.