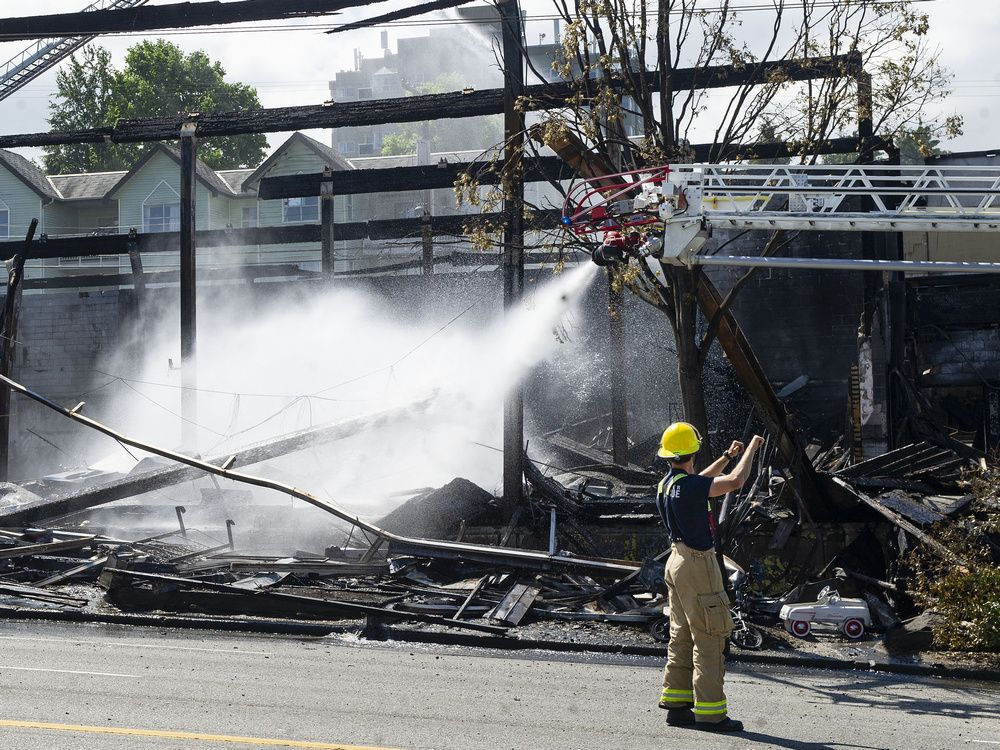 The cleanup and investigation to determine the cause of a fire that destroyed a Value Village thrift store on East Hastings Street has been put on hold because the basement flooded with water used to put out the flames , the fire department announced on Friday.

The cause of the fire is not known, but “anything is possible,” said Brian Bertuzzi, assistant chief of operations for Vancouver Fire and Rescue Services.

Bertuzzi said crews would go in this week and pump out the water, then bring in heavy machinery to knock down the walls.

“They (investigators) cannot enter due to the dangerous condition and the basement being completely flooded,” he said. “At the moment we are just waiting for some stability.”

The blaze broke out after 10 p.m. Wednesday and smoke was visible and smelt for miles around. Bertuzzi said more than 50 firefighters battled the blaze and about 12 fire engines attended the three-alarm blaze.

No one was killed or injured in the fire.

On Friday, all that remained of the building in the 1800 block of East Hastings Street was the exterior cinderblock walls, including the one that faced east. It was almost entirely intact and “Value Village” painted in large red letters at the top was still visible.

The front facade was gone and a few supporting steel beams were standing. The floor was piled over a meter high with charred wooden planks, twisted metal, parts of metal shelving and the building’s huge air conditioning unit.

Deb Beaudreau and Rich Talmey, who live nearby and visited the scene Wednesday evening, returned Friday to visit the ruins. They said they would miss the store, which has been a part of the East Vancouver neighborhood for decades.

“We like to go to costume events and used to come here to shop for clothes, and it was a great place to come and pick up a last minute tablecloth or something,” Beaudreau said.

“Just six days ago I bought two pairs of shorts for $10.”

She said her favorite find was a faux lynx fur coat she bought in 2009 for $30 and still wears.

“We offer employee assistance services for those who wish to participate, and we are looking for short-term and long-term employment opportunities for affected team members at other Value Village stores,” the company said. company spokeswoman Sara Gaugl in an email.

She also said Value Village was cooperating with firefighters in their investigation, but said it was too early to tell if the store will be rebuilt.

Value Village, which began in 1954 in San Francisco, is a thrift store business that pays nonprofits to donate items to the store, but none of the proceeds from store sales go to charity.

The site was closed over the weekend. In the back, a small black sedan still sat in a parking spot behind the store, with charred planks resting on the hood. A cardboard box full of clothes was inside the temporary blue fence near the back lane.

The vinyl siding of the multi-family unit that shared an alley with the store appeared to be melting and warping in one area. Some residences were temporarily evacuated on Wednesday.

Bertuzzi went to the scene on Friday morning. “It looks like they (firefighters) did an amazing job of containing it” and there is no damage to adjacent buildings, he said.

To the east is a used car parking lot, and dozens of cars for sale remained covered in soot.

To the west, the Indonesian Church of Bethany seemed spared from the fire. But half a dozen building restoration trucks were parked outside, and workers inside were cleaning chairs and floors.