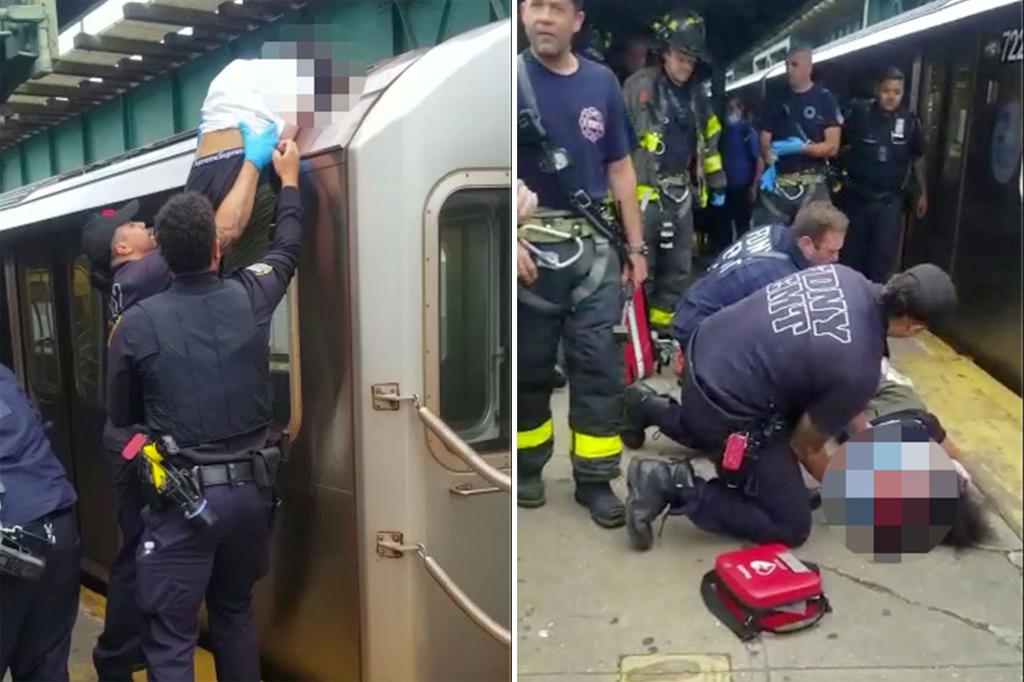 A 15-year-old subway surfer was clinging to life early Friday after hitting his head while riding on the roof of a 7 train in Queens, sources said.

Cops found the teen unconscious with serious head injuries atop a train car inside the 111th Street train station in North Corona around 6:30 p.m. Thursday night, according to police sources.

Police believe the boy was riding on top of the southbound 7 train on elevated tracks when he hit his head on an unknown object.

Dramatic footage from the scene shows officers and paramedics lifting the teenager from the roof of the train car and dropping him onto the subway platform. The teenager’s head was bleeding profusely in the footage.

He was rushed to Elmhurst Hospital, where the teenager was in critical condition.

Following the incident, 7 trains were delayed in both directions.

The boy’s tragic accident is at least the second subway surfing stunt in less than two weeks.

Earlier this month, video posted to Twitter showed a group of about eight people running onto the cars of a Brooklyn-bound J train as it crossed the Williamsburg Bridge.

Start your day with everything you need to know

Some of the subway surfers were seen carelessly sprinting and jumping the length of the train. The suspects in this incident have not been identified.

Last October, a 32-year-old man died surfing on top of a J train in Essex Street.

In 2019, a 14-year-old was killed while hitchhiking on the roof of a Manhattan-bound 7 train near Queensboro Plaza. That same year, reports of subway surfing rose 15% from the previous year, and transit officials believed the number was grossly underestimated, according to a survey by The City.

MTA officials berated any would-be daredevils looking to experience their thrills atop a moving subway train.

“Riding on top of a subway car is reckless, extremely dangerous and inconsiderate because it causes significant delays for other New Yorkers,” Pat Warren, MTA’s safety and security officer, said in a statement. .

“Seeking a thrill that promises heartache for family and friends is foolhardy; choose other avenues for fun, ones that show respect for those you love.