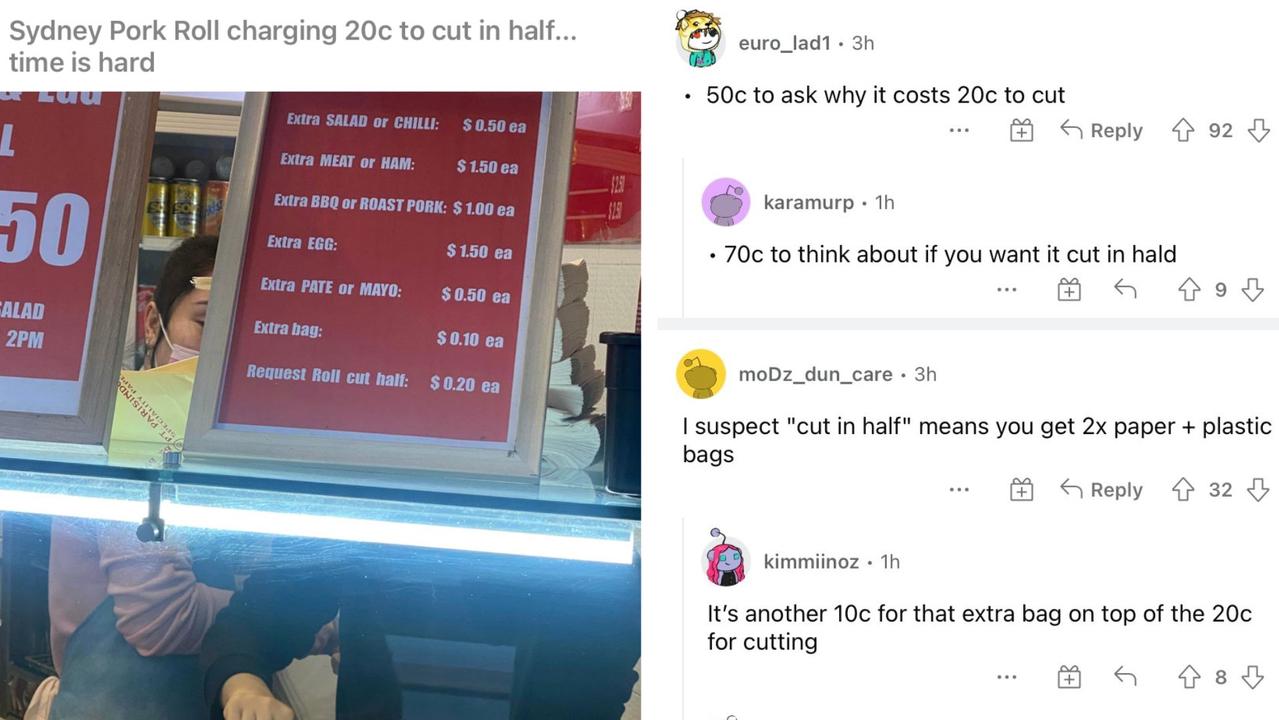 The rising cost of living has reached new heights at a Sydney pork roll shop after a customer spotted an unusual extra on the sandwich bar menu.

A roll from the store costs between $5.50 and $8.50 with additional meat, ham or egg to charge the customer an additional $1.50 while a second bag costs 10 cents.

But at the bottom of the list is a weird surcharge for a standard request, with the Haymarket store charging customers an extra 20 cents if they ask for their roll to be ‘half-cut’.

It’s a menu item that has baffled pork roll lovers, as some wonder why there’s an extra cost for a “two-second” service.

“How to cut in half? a Reddit user commented. “Long trips? Crossroads? Through the paths? So many questions here.

Meanwhile, others have thought of ways to circumvent the extra expense.

“Ask for it to be cut into thirds, it must be free as it’s not on the price list,” one comment read.

Another said they might consider halving it themselves with their own butter knife.

The odd surcharge also had commentators crunching the numbers to see how much extra money the company could make in an hour.

“With a two second cut…that equals $360/hr. Getting into the sandwich business,” one comment read.

“They should ask ‘would you like to cut it in half?’ like a fast food worker selling (by) asking if ‘you want fries with that’,” another said.

Others justified the extra cost by saying it could be because the restaurant uses more wrappers to divide the roll.

“Cutting it in half means that the two halves are wrapped and packaged separately. It’s completely reasonable to charge extra,” one Reddit user said, defending the expense.

Sydney Pork Rolls in Haymarket has been contacted for comment.

The roll half-cut surcharge joins a list of several other odd extra costs the Sydneysiders have recently spotted in the state.

A Sydney airport cafe would charge $1.50 more if a customer wanted more tomatoes in a toast, while others noticed the price of babychino increased by $1 to $2.50 in other places. other cafes in the state.

Some hospitality services and small businesses also charge their customers a small additional percentage if they pay for their items by tapping their debit or credit card instead of inserting or swiping.

Sites may also charge a holiday or weekend fee where prices are increased by a percentage on those days.

According to Australia’s consumer watchdog, the Australian Competition and Consumer Commission (ACCC), businesses can charge surcharges at their own discretion as long as the conditions surrounding the surcharge are explicitly stated and do not surprise the customer.

“The menu (or the price list) must include the words “a supplement of [percentage] applies to [the specified day or days]’ and these words must be displayed at least as prominently as the most prominent price on the menu (or price list),” the ACCC said.

There is no limit on the additional amount a company can charge in additional fees.