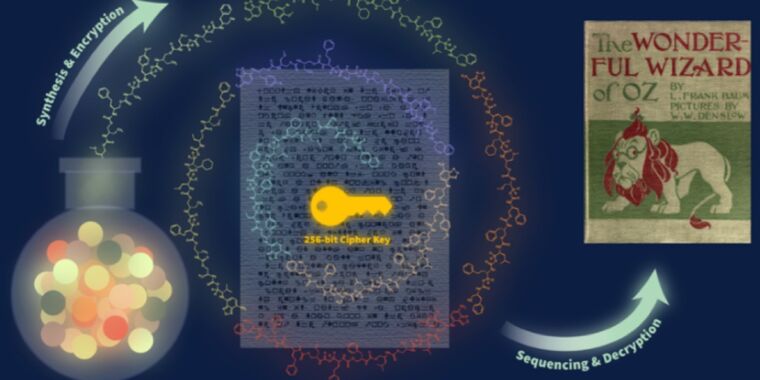 Scientists at the University of Texas at Austin have sent a letter to colleagues in Massachusetts with a secret message: an encryption key to unlock a text file of L. Frank Baum’s classic novel The Wonderful Wizard of Oz. The twist: The encryption key was hidden in a special ink mixed with polymers. They described their work in a recent article published in the journal ACS Central Science.

When it comes to alternative means of data storage and retrieval, the goal is to store data in the smallest possible space in a durable and readable format. Among polymers, DNA has long been the favorite in this regard. As we reported earlier, DNA has four chemical building blocks – adenine (A), thymine (T), guanine (G) and cytosine (C) – which constitute a type of code. Information can be stored in DNA by converting data from binary code to a base 4 code and assigning it one of four letters. A single gram of DNA can represent almost a billion terabytes (1 zettabyte) of data. And stored data can be retained for long periods of time, decades or even centuries.

There have been some inventive twists on the basic method for storing DNA in recent years. For example, in 2019, scientists managed to make a 3D-printed version of the Stanford Bunny — a common test model in 3D computer graphics — that stored printing instructions to replicate the bunny. The rabbit contains about 100 kilobytes of data, thanks to the addition of DNA-containing nanobeads to the plastic used to 3D print it. And scientists at the University of Washington recently recorded K-Pop lyrics directly onto living cells using a “DNA typewriter.”

But using DNA as a storage medium also presents challenges, so there is also great interest in providing other alternatives. Last year, scientists at Harvard University developed a data-storage approach based on mixtures of fluorescent dyes printed on an epoxy surface in tiny dots. The mixture of dyes at each location encodes information which is then read with a fluorescence microscope. The researchers tested their method by storing one of 19th-century physicist Michael Faraday’s seminal papers on electromagnetism and chemistry, along with a JPEG image of Faraday.

Other scientists have explored the possibility of using non-biological polymers for molecular data storage, by decoding (or reading) the stored information by sequencing the polymers with tandem mass spectrometry. In 2019, Harvard scientists successfully demonstrated the storage of information in a mixture of commercially available oligopeptides on a metal surface, without the need for time-consuming and expensive synthetic techniques.

This last article focused on the use of Sequence Defined Polymers (SDP) as a storage medium to encrypt a large data set. SDPs are essentially long chains of monomers, each corresponding to one of 16 symbols. “Because it is a polymer with a very specific sequence, the units along that sequence can carry a sequence of information, just like any sentence carries information in the sequence of letters,” co-author Eric Anslyn of UT told New Scientist.

But these macromolecules can’t store as much information as DNA, the authors say, because the process of storing more data with each additional monomer becomes increasingly inefficient, making it extremely difficult to retrieve information with the current crop of analytical instruments available. It is therefore necessary to use short SDPs, which limits the amount of data that can be stored per molecule. Anslyn and his co-authors found a way to improve this storage capacity and tested the viability of their method.

First of all Anslyn et al. used a 256-bit encryption key to encode Baum’s novel in a polymeric material composed of commercially available amino acids. The blocks were composed of eight oligourethanes, each 10 monomers long. The middle eight monomers held the key, while the monomers at either end of a sequence served as placeholders for synthesis and decoding. Placeholders have been “fingerprinted” using different isotopic tags, such as halogen tags, indicating where each polymer’s encoded information fits in the order of the final numeric key,

Then they mixed all the polymers together and used depolymerization and liquid chromatography-mass spectrometry (LC/MS) to “decode” the original structure and encryption key. The last independent test: they mixed the polymers in a special ink composed of isopropanol, glycerol and soot. They used the ink to write a letter to James Reuther from the University of Massachusetts at Lowell. Reuther’s lab then extracted the ink from the paper and used the same sequence analysis to recover the binary encryption key, revealing the text file of The Wonderful Wizard of Oz.

In other words, Anslyn’s lab wrote a message (the letter) containing another secret message (The Wonderful Wizard of Oz) hidden in the molecular structure of the ink. There may be more pragmatic ways to accomplish the feat, but they managed to store 256 bits in SDPs, without using long strands. “This is the first time that so much information has been stored in such a polymer,” Anslyn said, adding that the breakthrough represents “a groundbreaking scientific advance in the field of molecular data storage and cryptography.” .

Anslyn and his colleagues believe their method is robust enough for real-world encryption applications. In the future, they hope to figure out how to robotically automate the writing and reading processes.