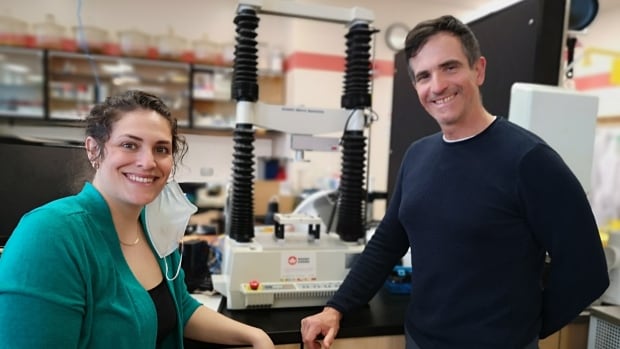 Researchers from the Department of Food Science at the University of Guelph in Ontario. have been working on a “cheese analogue” – a non-dairy cheese – which they believe is more nutritious and better suited for a variety of culinary applications than many non-dairy cheese products currently on the market.

“It’s a new plant-based cheese. Many other products don’t stretch, melt, or have [milk-based cheese’s] high nutritional value. We use the fundamental knowledge we have about plant-based protein ingredients to create something that has the desired texture and taste,” said researcher Stacie Dobson, a PhD student in food science at the university.

For several years, Dobson has been creating iterations of plant-based cheese and testing them in foods such as toasted sandwiches, striving to perfect the recipe.

Alejandro Marangoni, Canada Research Chair and Professor of Food, Health and Aging in Guelph’s Department of Food Science, advises Dobson in his research.

“The work that Dobson and the rest of us are doing here in the lab is to improve nutritional properties, increase protein content, increase micronutrient content as well as improve product functionality,” said Marangoni.

The team uses familiar kitchen tools, including a griddle, spatula, cutting board and knife. But there is also a “texture analyzer”, a machine that mimics chewing and provides data on properties such as hardness, chewiness and elasticity. The main ingredients of Dobson are vegetable protein, starch, coconut oil, salt, lactic acid and water.

“Most of the foods you eat are proteins, starches, carbohydrates and fats. These ingredients, depending on how we mix them, are the same building blocks we use to make plant-based cheese” , Dobson said.

Understanding the intrinsic qualities of ingredients allows Dobson to create recipes that meet the needs of various culinary applications — the functionality of “cheese.”

“Through food science, we can change the properties of cheese. I can make it a drier texture similar to Parmesan cheese versus what you want to be gooey like mozzarella, or something like a slice of cheese,” said she declared.

On the lab bench are half a dozen labeled bags containing pieces of shredded cottage “cheese” that look like what you might find in a grocery store dairy case.

Dobson turns on the griddle and prepares a frying pan; she spreads margarine on slices of German sourdough bread, loads vegetable cheese on the bottom slice and crowns it with another slice of bread. She then places the experimental sandwich in the pan.

Around the same time anyone would have to make a grilled cheese sandwich at home, Dobson flipped the sourdough sandwich from the cheese lab a few times and baked it until it is golden.

Chunks of cheese that have reached the hot pan will melt and then turn crispy, like the “cheese skirt” of any melted cheeseburger or sandwich that has been seared on a flat grill.

When the slices of bread are temporarily separated, strings of cheese stretch between the two slices. Acting like dairy cheese when cooked is the latest lab advancement.

Next step: production at the retail level

Some of the current plant-based cheeses at your neighborhood grocery store include products from Daiya, a Vancouver-based dairy-free food maker and partial funder of Dobson and Marangoni research. The company will use technology and scientific developments from the University of Guelph in the manufacture of plant-based foods.

“The next steps are to start scaling [for manufacture] of the product and hopes to achieve retail-level production,” says Dobson.

Creating delicious plant-based cheese is first and foremost for the lab; however, reducing the impact of food production on the environment comes next, according to Marangoni.

“We are currently living in a very critical time in our world. One of our main motivations is to improve the sustainability of our food supply. We are not here to replace animal products with plant-based products. , but rather to create variety in which we lessen our impact just because we are so many humans in the world,” he said.

“We will be close to replacing only 6% [of that]. It is a gigantic transition that should take place. We need to produce huge quantities of vegetable proteins and starches and build factories capable of producing these products,” he said.

When I took a bite, the grilled Dobsonian “cheese” sandwich was crispy on the outside and creamy and gooey on the inside with warm cheese that had good “stickiness”.

You couldn’t tell it was a plant-based product and, as Marangoni adds, you also consume less fat in your diet.

Can this cheese analogue, still under development in the laboratory, replace a good piece of Beemster or a creamy Havarti? Well, it really isn’t designed or intended to do that, the researchers say.

“For me, this cheese analog gets it done. It doesn’t exactly mimic a dairy product, but for most industrial applications,” he said – like in baked goods or even retail burgers or grilled sandwiches – “I think you would have it really hard to tell our plant-based product from the animal-based one.”