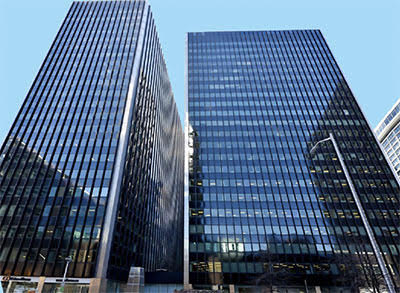 The sale of the Place de Ville office complex in Ottawa was just one of many major acquisitions in the city in the fourth quarter of 2021. (Courtesy Crown Realty)

The Ottawa office market might be a beta, or secondary, market in size, but it has been an alpha in investment and leasing activity in the last quarter of 2021.

Three major real estate transactions. Two new buildings delivered. Over 566,000 square feet of net absorption and an overall vacancy rate down to 8.6% – one of the lowest in North America. Those numbers, contained in CBRE’s fourth quarter 2021 Ottawa office report, would look good in almost any city in North America.

“Generally what we see is that the Ottawa market is more attractive, it offers attractive value for investors, more so than Toronto and Montreal,” said Louis Karam, managing director of the Ottawa office of CBRE, in an interview with RENX. “So I think that helps on that front. We certainly saw a lot of activity in 2021 and expect it to continue into 2022.”

With an office inventory of approximately 41.5 million square feet, much of it occupied by the federal government, and a growing slice housing a large technology sector, the city has long been considered a relatively stable investment. Karam said that remains true, but there are other factors at play as well.

CBRE Senior Vice President Nico Zentil has been involved in several of the city’s biggest deals over the past year. It also had a front-row seat as most of the city’s largest office buildings have undergone ownership changes over the past five years – including the 1.2 million square foot Place de Ville in November for $350 million.

“If you take a period of five years and look at the change of ownership in the downtown towers, that was the most important for me. We’ve had a huge swing in recycling real estate in downtown Ottawa over the last five to six years,” observed Zentil. “It’s the natural recycling of real estate.”

“If you look at Minto (Place), Constitution (Square), Place de Ville, Sun Life, World Exchange, the five largest towers, complexes in the city, they have all changed hands in the last five years. So we’re probably not going to see that repeat over the next five years, because you have a certain tenure of ownership that’s going to come into play there.

Several large investors who had owned the market for years – including Oxford Properties, CPP Investments, AIMCo and even Brookfield – have exited or significantly reduced their holdings.

Companies such as Vestcor and Crestpoint, which acquired Place de Ville, Crown Realty Partners, BTB REIT and others are moving in to fill the void by rolling out their own investment strategies.

Some sold out towards the end of a fairly stagnant period for the Ottawa office, but more recently there are new reasons for the exits.

“Some groups that are no longer here rolled out real estate strategies a decade, 10 or 15 years ago, and the intent was to execute them and they executed them very well,” Zentil said. “Many groups in this context are redeploying internationally, they are redeploying to more concentrated positions in certain (other) centers.

“The most important thing for us is that we had the capital behind to backfill.”

Crown and its investment partners, for example, have acquired 2.7 million square feet of space in Ottawa in recent years. That includes the two Class A 3755 Riverside Rd. office complex formerly owned by IBM, which it bought for $49 million in December in a sale-leaseback.

These acquisitions, along with the purchase of two office properties from Bank Street to Lansdowne Park by BTB REIT, propelled Ottawa office investment to its second best quarter at around $502 million.

More is to come. Zentil said up to four major properties could change hands in the first quarter of this year. Although he couldn’t divulge any details, he said investors are very interested in the National Capital Region.

“There is conviction in space. There are people who have a very long view of the office,” he said. “2021 has been a big year in terms of volume. . . we saw a lot of exchanges. And I think 2022 has the potential to be another (great year).

“We’ve never been so active at the start of the year, I don’t think. It’s telling, I think. The year begins with a lot of foam.

This “scum” spills over to other segments of the CRE market. Two major office properties were delivered in the fourth quarter, accounting for a large portion of new leases in CBRE’s report.

“If you reduce that a bit, it’s mostly due to the delivery of new space that’s already pre-let,” Karam explained. “Zibi, for example, they have 170,000 square feet delivered in the fourth quarter that is 90% federally occupied.

“If I look at Kanata, there was 150,000 square feet delivered for (tech company) Kinaxis, which is fully occupied by Kinaxis.”

Zibi is a multi-billion dollar development along the Ottawa River, straddling Ottawa and Gatineau, developed by a Dream Consortium. Three other office buildings are in various stages of development at Zibi, comprising approximately 210,000 square feet of additional space.

This space was announced before the pandemic, but Karam said there was still a rental momentum in the city.

Another example is that about 25% of the 300,000 square feet of sublease space put on the market by e-commerce darling Shopify at the start of the pandemic has been leased in 2021.

“If you look at this new supply and you look at some of the big transactions that have taken place over the past few months, we are definitely seeing a decrease in vacancy.”

Tech companies are expanding their offices

And despite early fears that tech companies were abandoning office space en masse and turning to work-from-home models, that hasn’t happened. The sector is leading the charge in Ottawa.

“What impressed me when I came to Ottawa was the tech sector,” said Karam, who arrived in the city about six months ago. “Kanata (in Ottawa’s West End) has been very resilient, helping to diversify tenants across the city and it’s thriving.

“We strongly believe that the recovery from this pandemic will be led by the tech sector and I think that’s what helps us here in Ottawa.

Karam and Zentil remain bullish on the city and the area for many of the same reasons. Ottawa has always been part of the portfolios of many investors.

“Ottawa has been a really good hedge for (investors) where they can get relative value, a bit more yield sprinkled on the cupcake, so to speak. All in all, it helps even things out,” Zentil said.

“When the rest of the country goes crazy in terms of accelerating prices, Ottawa helps bring things down to ground level. On the other hand, when the country isn’t doing so well, Ottawa always tends to be that equalizing market that helps elevate things.

“So it’s a very good city in terms of geographic diversification for a portfolio manager.”