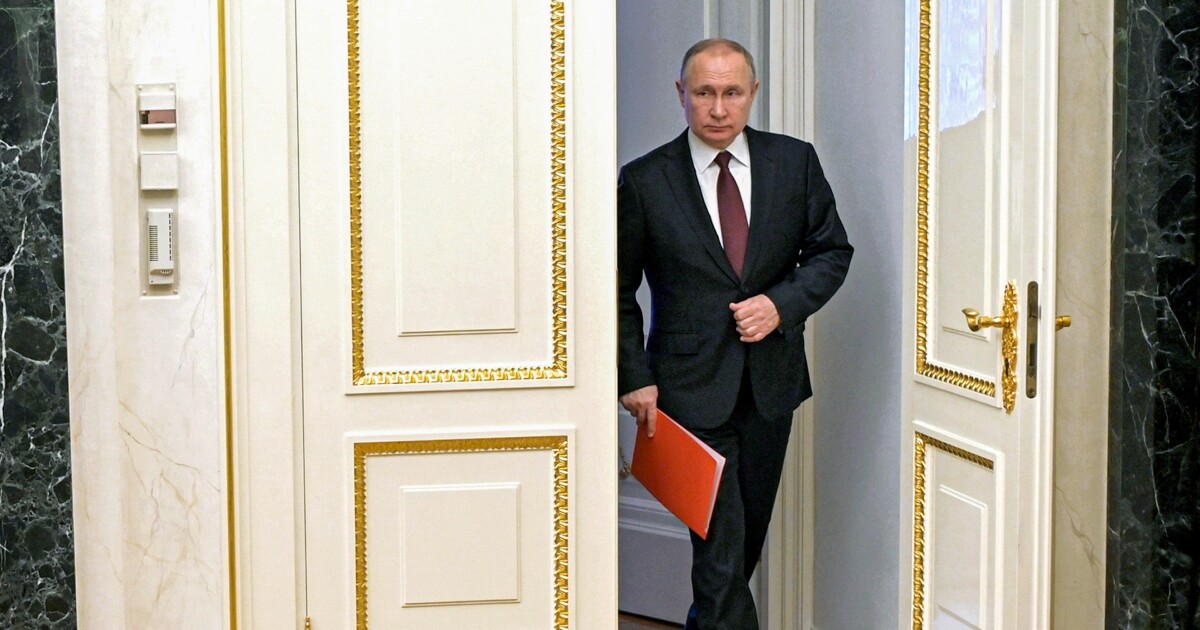 The “madman” theory is a long-standing political trope, redolent of Cold War-era rivalries. The idea is to throw opponents off balance by making them believe you are so volatile, so hostile and so irrational that there’s simply no telling what you might do next.

Is he genuinely unbalanced, they ask, or just letting everyone think he is? Or some combination of the two? Or something else?

Some veteran observers are wary of drawing conclusions from afar.

“Look,” said Sam Greene, director of the Russia Institute at King’s College London, “the difficulty that I’m having analytically is that I don’t know how I would be able to distinguish between a Putin who is crazy and a Putin who just understands the world in a very different way than I do.”

But others who have kept a close eye on the 69-year-old Russian leader during his more than two decades in power believe some fundamental personality shift has occurred — whether because of physical illness, drawn-out isolation prompted by the COVID-19 pandemic , the insularity and sycophancy of Putin’s inner circle, or a burning sense of historical insult coupled with aspirations of imperial grandeur.

In recent photos and footage, he even looks different — puffy-faced and sometimes seeming to move stiffly.

“I personally think he’s unhinged,” James Clapper, the former director of national intelligence, said Sunday on CNN. “I worry about his acuity and balance.”

Putin’s rambling, grievance-laced public statements since the Ukraine crisis surged to the fore have been deeply unsettling to a world audience.

On Sunday, he announced he was placing his country’s nuclear deterrent forces on alert, railing against a Western campaign of punitive economic sanctions. In other speeches, he has denounced Ukrainian leaders as drug abusers and fascists, all the while insisting that Ukraine — a sovereign nation for more than three decades — is not even a real country.

Such behavior is notable in a leader who has long cultivated an international image as a cool-headed, coldblooded calculator of cost and benefit — ruthless, to be sure, but on some level rational in his pursuit of geopolitical goals.

Some world leaders, however, have come away from recent encounters with Putin with the impression he was increasingly unmoored from reality. French President Emmanuel Macron, who traveled to Moscow for talks with Putin weeks before Russian forces began their wide-ranging assault, described him as “more rigid, more isolated.”

At that meeting, like several others held lately with dignitaries and aides, Putin was photographed sitting at the far end of an extremely long table, which has emerged as something of a same underscoring a vast degree of disconnection.

Finland’s president, Sauli Niinisto, a frequent interlocutor over the years, recounted an abrupt shift in Putin’s demeanor during a recent phone call, with the Russian leader suddenly abandoning a normal conversational exchange to begin on a strident recital of demands.

“He has behaved in a way which is very difficult to predict,” Niinisto said Sunday on CNN. “But that might be, also, intentional — namely, to behave that way because that brings confusion to surroundings.”

Even some traditional allies expressed disbelief that Putin would make the leap from threatening Ukraine with a massive troop buildup — an attention-getting tactic that forced the West to engage in high-level talks with him — to attempt a violent dismemberment of the country, very different than the nearly bloodless 2014 seizure of the Crimean peninsula.

The notion that a head of state can reap foreign policy rewards by appearing utterly unpredictable — a tactic President Nixon was said to have employed to try to rattle North Vietnam — also had recent echoes during the Trump administration, when supporters maintained he cleverly flummoxed opponents by unexpectedly breaking with established norms.

But many Putin watchers see a far more dangerous phenomenon at work in his attempted conquest of Ukraine, a sovereign country of 44 million people.

Michael McFaul, the US ambassador to Russia under President Obama, suggested in a weekend talk show appearance that over time, the Russian leader had come to believe his own propaganda.

“I met him in 1991. I’ve been watching him since he was prime minister in 1999,” McFaul said Sunday on NBC. “I sat in the room with him for five years when I worked in the Obama administration. I speak Russian. I listen to him and I know what he says. He’s increasingly unhinged in the way he talks about” Ukraine’s leaders, especially President Volodymyr Zelensky.

Condoleezza Rice, who was secretary of State in President George W. Bush’s administration, said the Russian leader had been acting “erratic.”

“I met with him many times, and this is a different Putin,” Rice said Sunday on Fox News. “He was always calculating and cold, but this is different.… There is an ever-deepening, delusional rendering of history.”

Some analysts suggest that Putin’s decades in power have begun to act as something of a reality-distorting force field, an echo chamber of sorts. Few close to him dare to express any disagreement.

“Longtime personalist leaders like Putin are the most prone to making mistakes,” Andrea Kendall-Taylor, a senior fellow at the Center for a New American Security, wrote Saturday on Twitter. “His decision to attack Ukraine is a painfully unfortunate example of that.”

Greene, of King’s College, said Putin being surrounded by people who are afraid to tell him hard truths might offer a sounder explanation than “unverifiable” theories about COVID isolation-induced paranoia or the Russian leader suffering from some kind of terminal illness.

“He’s not the first autocrat who gets very bad advice,” Greene said. “And does dumb things as a result of it.”