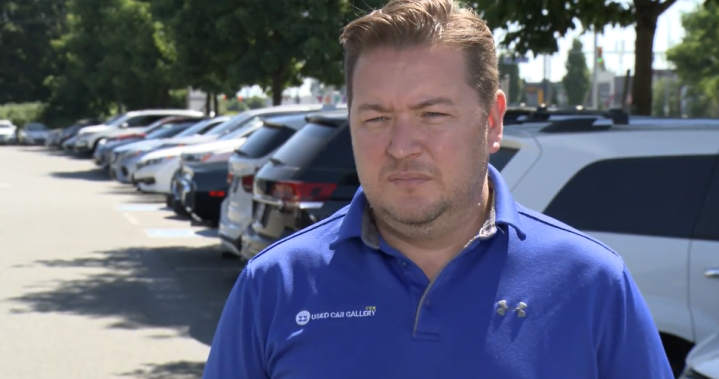 A Metro Vancouver business owner said he was “shocked” to learn that one of his rental vehicles was linked to a brazen double shooting in Burnaby over the weekend.

Jonathon Gagnon, owner of YVR Used Car Gallery, confirmed that his black Mercedes-Benz GLC was found burnt out on Saturday, shortly after two people were shot on Highway 1.

Gagnon said the person who rented the vehicle messaged him through the car-sharing app he used to rent it – Turo – to tell him he had been the victim of a carjacking. The vehicle had been rented until Wednesday.

“I was shocked to be honest with you,” Gagnon told Global News on Monday. “The client himself seemed like a very nice guy. He was an older gentleman. It was just a normal day in the car rental and car sales business. »

One dead after brazen double shooting on Highway 1 in Burnaby, B.C., police say

Meysam Zaki, 18, was killed in the shooting. He was a passenger in the vehicle. The driver was also shot and sustained non-life-threatening injuries.

The attack took place in the Kensington Overpass area of ​​the Trans-Canada Highway at approximately 2:30 p.m. The Integrated Homicide Investigation Team (IHIT) is investigating and currently believes it was a Gang-related targeted shooting in progress. conflict.

Shortly after the shooting, a black SUV was found on fire on Eastlawn Drive in the Brentwood neighborhood. Investigators believe this is the suspect vehicle.

1:32
One dead after double shooting on Highway 1 in Burnaby, B.C.

One dead after double shooting on Highway 1 in Burnaby, B.C.

This vehicle’s license plate matches that of the GLC on Gagnon’s website, and he confirmed that police approached him over the weekend to say that one of his vehicles was involved in a “major crime”.

“I was blown away. I didn’t know a car could light up like that. It was sad because it was a nice car,” he said. “(The police) were very vague about what happened. We just knew what car it was.

Global News reached the customer who rented the vehicle. He declined to appear on camera, but said he was the victim of a carjacking by three people. He claimed he was lost, was told to leave the car and was “shocked” to learn later it was linked to the shooting.

In a written statement, Turo – the car-sharing app he used – said he was “distressed” to learn that one of his host’s vehicles was involved in a crime.

“We took immediate action to support our affected customers and our team is actively cooperating with law enforcement,” the company wrote.

“Although these types of incidents are extremely rare in our market, our support team is always ready to make things right for our customers when incidents do occur.”

The company said such incidents are “rare” in its market and it has strong security screening processes in place.

The vehicle, which had low mileage and was in “perfect condition,” had been reserved by several other customers this summer and was expected to be sold in the fall, Gagnon added.

The business owner said between his two locations – Vancouver and Coquitlam – there have been six “incidents” affecting his stock and no arrests have been made.

“Every time we have an incident like this, it just adds cost to everyone,” he said. “Now we have to worry about cars being stolen that way rather than stolen from the field…that’s taken it to a new extreme.”

Including this latest shooting, there have now been three gang-related shootings in the Lower Mainland over the past three weekends.

Police said they released the name of homicide victim Zaki in hopes that witnesses could help them establish “a timeline of his whereabouts” in the hours leading up to the shooting.

“Any associates of Mr. Zaki or the second victim are asked to speak to the police. IHIT is committed to bringing justice to the family of this young man,” said IHIT Sgt. Timothy Pierotti on Sunday.

Anyone with potential information or dash cam footage from the area is asked to contact IHIT at 1-877-551-4448.

— With files by Darrian Matassa-Fung