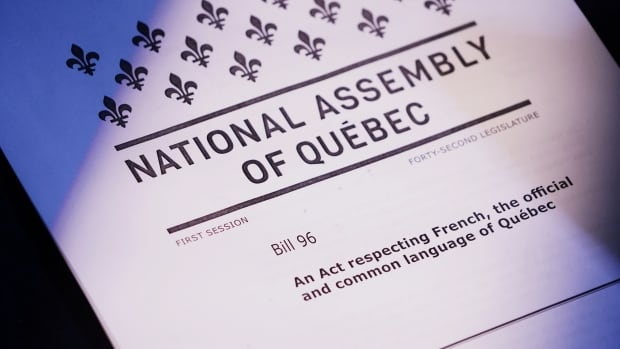 The Government of Quebec is giving businesses in federally regulated sectors one month to begin complying with new requirements to ensure the use of French in their workplaces.

The move comes as Ottawa’s plans to modernize the country’s Official Languages ​​Act, which will include new rules for federally regulated businesses, are still being debated in Parliament.

Federally regulated sectors include banking, telecommunications, and transportation, which were outside the legal jurisdiction of the Quebec government until the recent passage of a new language law known as Bill 96.

According to political scientist Stephanie Chouinard, a specialist in language issues, the Quebec government is acting as Ottawa continues to face criticism for its long-delayed plans to modernize federal language laws.

“Quebec is currently benefiting from a vacuum, that is to say that as long as the federal government has not issued the new directives demanded by C-13 regarding the language requirements of businesses under federal jurisdiction, it is possible for let Quebec act,” said Chouinard, who teaches at the Royal Military College of Canada in Kingston, Ont.

According to information obtained by Radio-Canada, the province Quebec office of the French language (OQLF) sent a letter last Friday to more than 800 companies telling them to start developing a formal plan to allow employees to work in French.

The OQLF has asked all businesses under federal jurisdiction to provide the name of a contact person and the number of employees within 30 days.

Companies with 25 to 49 employees have three years to finalize the process, while those with 50 or more employees have six months. Small businesses won’t have to develop a plan.

The Quebec government extended the scope of its language laws to businesses under federal jurisdiction with the reform of the Charter of the French language, which came into effect last month.

The minister responsible for French in Quebec, Simon Jolin-Barrette, maintains that his government has the power to impose new obligations on all businesses located in the province.

“Quebecers have the right to earn a living in their language, which is French. It is a fundamental right and it is not negotiable,” said a spokesperson for Jolin-Barrette, Élisabeth Gosselin-Bienvenue.

Under Bill 96, companies must provide their employees with human resources information and other documents in French, offer training opportunities in French, post job offers in French and limit the number of positions that require employees to speak a language other than French.

A lawyer who helps businesses comply with the Charter of the French Language recently predicted that this case could end up in court.

“There is clearly room for some conflict with federal employment law, and one would expect that the federal Department of Justice could intervene in such cases to preserve federal jurisdiction” , said Alexandre Fallon, lawyer at Osler, Hoskin & Harcourt.

Many federally regulated businesses in Quebec proactively comply with provincial French language requirements and have obtained a francization certificate from the OQLF.

However, it remains unclear how companies will react to Quebec’s efforts to enforce mandatory language rules in federally regulated sectors.

Among the companies that will be affected by the new measures, the railway company Canadian National (CN) says it is analyzing the provisions of Bill 96 that affect companies under federal jurisdiction.

Air Canada has indicated that it is already governed by the federal Official Languages ​​Act, while adding that its subsidiary Air Canada Vacations is under provincial jurisdiction and is already registered with the OQLF.