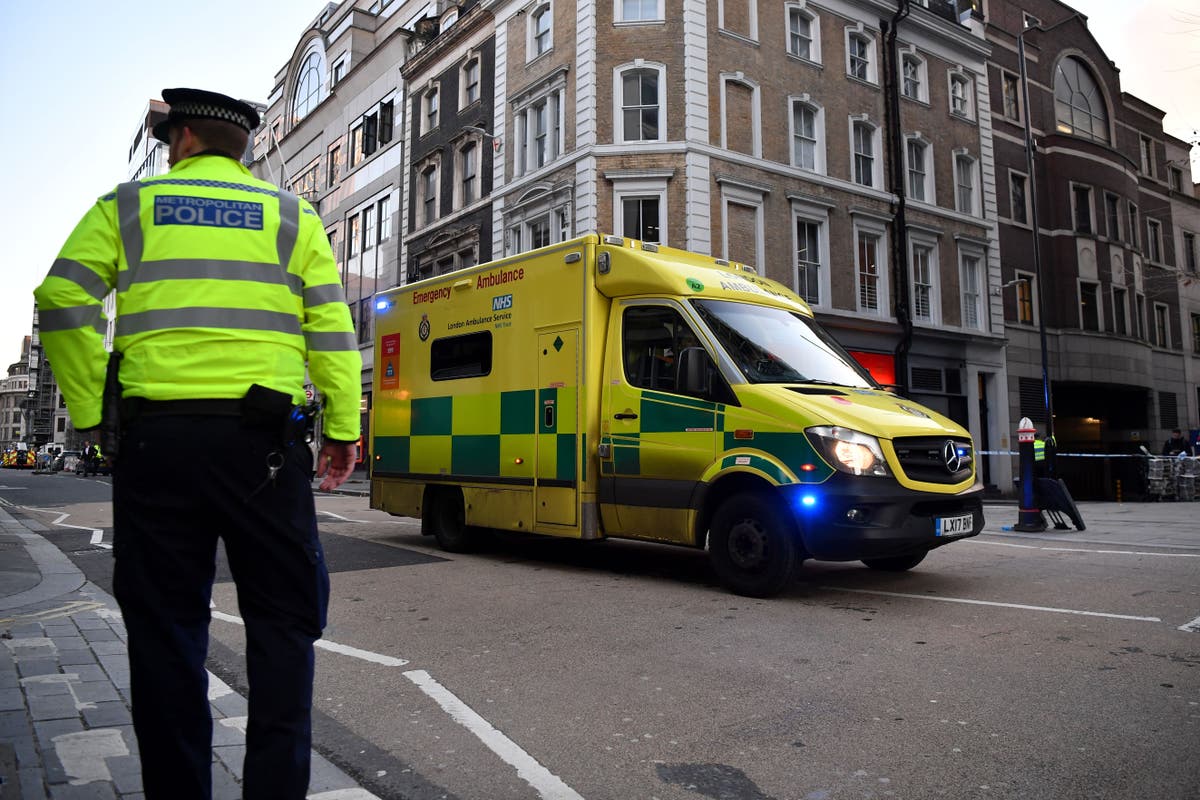 Police officers are forced to cover other services – including responding to ambulance calls – as the NHS crumbles under growing demand.

The Chief Inspector of British Forces has warned that up to a third of the time is spent on non-police work, hampering crime-fighting efforts.

Armed police have even been called in for heart attack patients due to a shortage of available paramedics.

Andy Cooke, Chief Inspector of Her Majesty’s Police, said The Independent that this was the result of an NHS crisis and cuts to mental health and social services. He warned it was taking police away from tackling crime at a time when recorded offenses were at an all-time high in England and Wales.

Mr Cooke, the former chief constable of Merseyside Police, said: “Recently officers in Armed Response Vehicles (ARVs) were dispatched to reports of people who were having cardiac arrest because the ambulance service couldn’t keep up with the demand because they’re re-trained in first aid and the use of defibrillators.

“The ambulance service contacted the police to say ‘we have this heart patient and we have no one to send’.

“Being the first, last and only resort, the police will go. It’s true that they went there, but that hides the problems we have in the rest of the system.

An officer who spoke to The Independent said anonymously that armed police were regularly dispatched to respond to ambulance calls in his area of ​​strength.

“I see logs every day saying ‘cardiac arrest – can you send an ARV?’ “, he added. “One even involved a terminally ill patient and I wonder about ringing for an ambulance and armed police showing up.”

NHS leaders have warned that ambulance services face a ‘chronic crisis situation’ as response times deteriorate and 999 calls hit record highs. The country’s 10 ambulance services were on ‘black alert’, the highest possible level, last month as patients needing urgent responses for conditions including a suspected stroke left on hold for up to two hours .

A parliamentary report warned last week that the NHS and social care sector were facing the ‘biggest workforce crisis’ in their history and said a ‘persistent understaffing’ was putting the patient’s life at risk. Long waits for ambulances and A&E services have been exacerbated by record Covid-fueled absences.

The National Council of Chief Constables has said officers have to transport patients to hospital due to a lack of ambulances, which sometimes means they have to wait hours in A&E with the mentally ill and people vulnerable who have not committed any crime.

The local National Police Officer, Chief Constable Olivia Pinkney, said: ‘It reduces the ability of the police to fight crime and protect people in all the broader ways that we should.

“It can also put officers in situations where they have to make decisions that they are not in the best position to make, no matter how hard they try.”

Ms Pinkney said the police were called upon for duties which should be performed by other emergency services or public bodies, adding: ‘Preservation of life will always be our number one priority when helping someone in need. .

“We are working at the pace of our emergency service, local authority and government partners to ensure this issue can be resolved, but we should not be the service of first resort in these situations.”

Mr Cooke said it was legitimate for the police to help medical professionals during violent incidents or when crimes were being committed, but added: ‘Officers are always playing roles they shouldn’t to play.

“Once a situation has calmed down, that should be the end of the response – not six to eight hours spent with people in hospitals.”

Demand for emergency ambulances hit a record high in June this year, with the NHS responding to 900,000 emergency calls. The average response time for category two patients, which includes those with strokes and heart attacks, was 51 minutes – far longer than the 18-minute target.

The Association of Ambulance Chief Executives said police transporting patients to hospitals was “not a desirable situation”.

Chief Executive Martin Flaherty added: ‘This is clearly not in the best interests of patients, it puts police in an incredibly difficult position and it takes up valuable police resources.’

Police chiefs have also raised concerns about the rise in calls for mental health crises that are not criminal incidents, with a monitoring report previously warning that officers were being forced to ‘pick up the pieces’ of a “broken” mental health system.

Mr Cooke warned that the additional demands placed on the police would impact officers’ ability to tackle crime, saying: ‘When we look at how the police can improve, we can’t just look at the police – we need to look at those factors that are swaying police services away from what the public would like them to do.

“The rest of the system must stand up and be counted – mental health, the NHS, the ambulance service, other professionals.

“I accept the challenges they have. Because they’ve been through long periods of austerity, we have far fewer social workers and youth workers, we have far fewer people involved in mental health, but that can’t be up to the police to fix these problems.

His comments come after recorded crime hit a new high in England and Wales, while the proportion of offenses resulting in a charge fell to a record low of 5.6%. The figure for rape is only 1.3%.

Mr Cooke said the figures partly reflected better registration practices rather than a ‘massive explosion in crime’, but warned the charge rates were ‘just not good enough’.

He called on the police to “get back to basics” by responding properly to victims and making the most of investigative tools and crime prevention opportunities”, but added: “The police must have enough time and resources to go and do what the public expects. what they do.